Liberals pride themselves in being more logical, reasonable, and scientific than conservatives, but the Hobby Lobby case has proven that this general picture of liberals is all wrong. They also tell us that they are more compassionate, loving, and interested in the welfare of people less fortunate.

Hogwash! Have you seen some of the “burn down the Hobby Lobby stores” tweets?

The Hobby Lobby case has proven to be an indictment on the entire liberal mindset. I’ve never heard so many lies, statements of misinformation, and hysteria in my life.

While driving home from a business meeting, I heard an interview with Hillary Clinton. Just listening to her speak makes my skin crawl. Every word that comes out of her mouth is a lie. I can’t say it any other way.

She’s a lawyer. She’s supposed to deal in facts. There is enough information about the Hobby Lobby case for anyone to get the facts straight. It’s obvious that she was playing to the dregs of her party. She was purposely lying or she was woefully misinformed which disqualifies her from ever holding political office.

The 5-4 majority did not deny any woman contraceptives. Even the usually liberal USA Today gets it mostly right for anybody who cares to know the facts.

The ruling of the court was based on the 1993 Religious Freedom Restoration Act. “The bill was passed by a unanimous U.S. House and a near unanimous U.S. Senate with three dissenting votes and was signed into law by President Bill Clinton.” 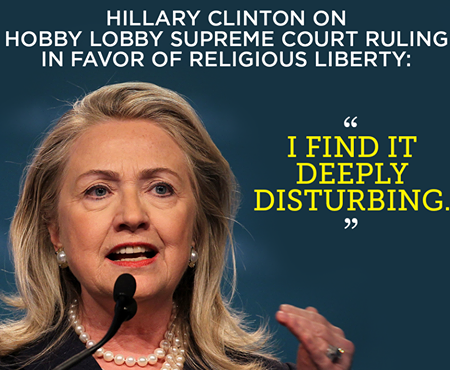 Has it gotten so bad in America that people can’t put two pieces of information together and draw a conclusion?

To repeat, the Supreme Court did not deny anybody contraceptives. Even if the Court had ruled that employers didn’t have to pay for any contraceptives as mandated by Obama, this would not have denied women or men access to contraceptives.

Employees use the money they are paid for their labor and purchase food and pay their mortgages, rents, and water bills. Why should it be any different for contraceptives? Food and water are real necessities. Contraceptives are not.

Why can’t women use their own money to pay for contraceptives? Why should employers be forced to pay for them? Hobby Lobby employees are paid a very high wage compared to the government mandated Minimum Wage.

“Arts and crafts giant Hobby Lobby Stores Inc. announced [in 2013], the minimum wage for its full-time hourly employees at its stores and affiliate Hemisphere was increased to $14. The hourly wage for part-time employees was also increased to $9.50.

“In a report . . . , founder and CEO of the company David Green said the decision was simply an acknowledgement of the hard work and dedication of his employees.

“‘We are very fortunate to be able to increase hourly wages for our employees, because we know our company would not be successful without the great work they do each day in our stores across the nation,’ said Green.”

Employers are already paying for Social Security, Medicare, and unemployment insurance. This comes to around seven percent of an employee’s salary. This means that for someone making $50,000 per year, his or her employer is paying an additional $3500 in required government taxes.

Keep Your Ovaries Out of My Wallet