Supreme Court Associate Justice James Wilson (1742-1798) said that the government of the United States of America is “the best form of government which has ever been offered to the world.” Wilson, as a delegate from Pennsylvania to the Constitutional Convention and a signer of the Declaration of Independence (one of six), was asked to speak to a large public meeting in the yard of Independence Hall on October 6, 1787. Here’s some of what he said:

After all, my fellow-citizens, it is neither extraordinary or unexpected that the constitution offered to your consideration should meet with opposition. It is the nature of man to pursue his own interest in preference to the public good…. Every person … who enjoys or expects to enjoy a place of profit under the present establishment, will object to the proposed innovation; not, in truth, because it is injurious to the liberties of his country, but because it affects his schemes of wealth and consequence. I will confess, indeed, that I am not a blind admirer of this plan of government, and that there are some parts of it which, if my wish had prevailed, would certainly have been altered. But when I reflect how widely men differ in their opinions, and that every man (and the observation applies likewise to every State) has an equal pretension to assert his own, I am satisfied that anything nearer to perfection could not have been accomplished. If there are errors, it should be remembered that the seeds of reformation are sown in the work itself and the concurrence of two-thirds of the Congress may at any time introduce alterations and amendments. Regarding it, then, in every point of view, with a candid and disinterested mind, I am bold to assert that it is the best form of government which has ever been offered to the world.

Wilson was one of the six original justices appointed by George Washington to the Supreme Court of the United States. I wonder if Wilson could be appointed to the Supreme Court today given some of the things he said and wrote. Even with its flaws (which he acknowledged), Wilson could say, contrary to NY Gov. Andrew Cuomo who said, “America was never great,” that our “form of government which has ever been offered to the world.” 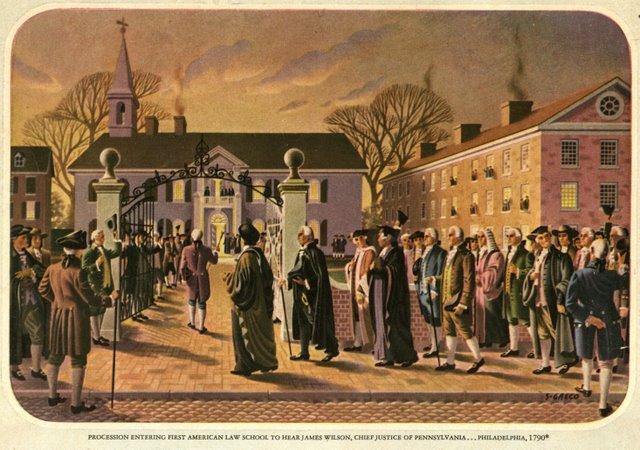 Wilson seemed to have looked down the long corridor of history to see how the Constitution could be manipulated to grow the Federal government beyond its enumerated powers. During the speech at Independence Hall, Wilson was critical of “the proposed Bill of Rights. Powers over assembly, the press, search and seizure, and others covered in the Bill of Rights were, according to Wilson, not granted in the Enumerated Powers so therefore were unnecessary amendments.”

Once the national government was given jurisdiction in determining what constitutes, for example, freedom of religion, press, speech, and assembly and the “right to bear arms,” the determination of those rights would be left to a slim majority of Supreme Court justices.

But it’s worse than Wilson thought it would be. Even with the language of the Ninth and Tenth Amendments limiting the power of the National government, Congress and the courts continue to legislate far afield from the powers enumerated in the Constitution.

Wilson’s religious beliefs would be attacked similar to the way Joe Biden attacked Clarence Thomas and Dianne Feinstein and other Democrats attacked nominee Amy Coney Barrett during a confirmation hearing for 7th Circuit Court of Appeals.

'Bind, Torture, and Kill’ Murderer Is the Epitome of Blind Moral Indifference