The Blood Thirsty Indigenous Peoples of the Americas

Yesterday liberals celebrated “I Hate Columbus Day.” In order to express their disdain for the intrepid explorer, they’ve remade “Columbus Day” into “Indigenous Peoples Day.” Let’s look at some of these Indigenous Peoples, in particular the Aztecs and Inca.

While Spanish conquistador Hernán Cortez’s arrival caused Montezuma fear and dread, it gave hope to many of the Indian tribes who suffered under Aztec rule. The Aztecs had raided neighboring tribes for years, capturing thousands of victims for human sacrifice, a central part of Aztec religion. Aztec temples were literally stacked with human skulls. When the Spaniards made their way toward Mexico, local tribesmen who feared and hated Montezuma followed after the conquerors, urging them to attack without mercy.

When Cortez entered the Aztec capital, he spotted the center of religious worship, the sacrificial pyramid. He made his way up the hundred and fourteen steps with some of his best soldiers following close behind. Montezuma was at the top waiting for him. What Cortez and his battle-hardened men saw shocked them like nothing they had ever seen before.

Montezuma had just sacrificed some boys to keep the gods happy, and there was blood everywhere. Bernal Diaz, an eyewitness, describes the scene:

“All the walls . . . were so splashed and encrusted with blood that they were black, the floor was the same and the whole place stank vilely. . . . The walls were so clotted with blood and the soil so bathed with it that in the slaughterhouses of Spain there is not such another stench.”1 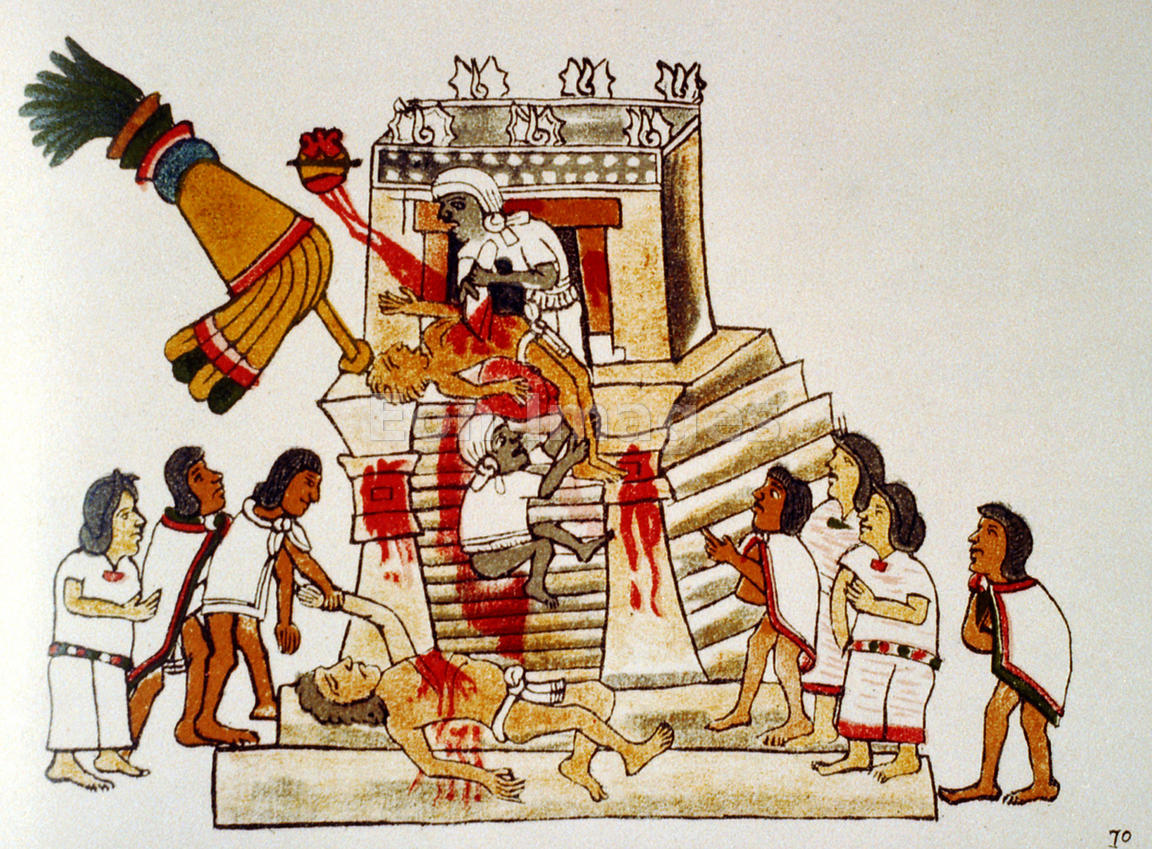 “In ancient Mexico, human sacrifice was an offering to the gods of people’s most precious possession, their blood. The custom that most startled the Spaniards, ritual cannibalism, was in fact the attainment of a spiritual idea: It was a true communion.”2 Aztec priests threw their victims down on a sacrificial stone, opened their chests with a flint knife, and pulled out the still beating heart, which was then burned in a stone urn. “Each year thousands of Aztecs had their hearts cut out of their living bodies and offered to the Sun god, who was also their god of war. Thousands more were burned alive, skinned, and drowned as offerings to other gods.”3

How would today’s historical revisionist explain the daily bloodletting? I can just see it now. “The Aztecs were a highly advanced culture, especially in the area of medicine. Open heart surgery was practiced on a regular basis. Rarely if ever did a patient live, but it was the courage of the Aztecs to attempt the impossible that set them apart from their Spanish rivals.”

Like the Aztecs, the Inca Indians also had a culture steeped in blood. Yet, we’re told that the “Inca were never that bloodthirsty. When they needed a special favor from the gods, hundreds were sacrificed.” Hundreds, thousands, what’s a few sacrificial victims among these “straight and strong” who “offered life in sacrifice so that others could go on,” as Neil Young sings in “Cortez the Killer”?

We need to be more tolerant of their beliefs since the Inca were not malicious when they sacrificed their victims. Actually, the priests were doing them a favor.

“Terrible as human sacrifice seems to us, we should remember that the Inca thought it necessary to their well-being. Sacrificial victims were not being punished for any crime; they were being rewarded for their beauty. The killing was done as painlessly as possible and without anger or hatred. Being sacrificed was, indeed, an honor that guaranteed eternal life with the gods and thus a “favor.”4

The above was written in the spirit of pluralism and toleration of everyone’s religion, even ones that encouraged digging out your heart with a flint knife. If you’re one of the most favored, you might be drugged (to ease the pain), dressed in fine clothes, and strangled with a rope before they cut your palpitating heart from your chest.

Certainly the Conquistadors had their faults. Even so, their exploits, both religious and military, nearly eradicated ritual human sacrifice from Central and South America.

William A. Hamilton, who formerly taught Western civilization at Nebraska Wesleyan University, offers a much needed antidote to the misguided efforts of today’s multiculturalists:

“The point is not to put down pre-Columbian culture. But before the politically correct multiculturists assign Columbus to the ash heap of history, let us not dismiss the conquistadors as less civilized than the natives they encountered. They ended massive ritual human sacrifice.5

By the way, human sacrifice still persists in certain parts of the world. In 1988 a male college student was brought to a remote site near Lake Titicaca in Peru. There his throat was slit, and his blood was used as part of an ancient Incan religious rite. Patrick Tierney, author of The Highest Altar, believes that “regular seasonal sacrifices” still take place in the Andes.6

“What Do You Think Would Happen if We Burned a Koran on Tonight’s Show”?

The Blood Thirsty Indigenous Peoples of the Americas