“No State shall…coin Money; emit Bills of Credit; make any Thing but gold and silver Coin a Tender in Payment of Debts….” – Article I, Section 10, Clause 1 of the Constitution

There’s a video going around where a man offers people the choice between a Hershey chocolate bar that costs around $2.00 and a ten-ounce silver bar. The people on the video choose the chocolate bar. (see video below)

We’re not shown anyone who chose the silver bar. I would have liked to have seen follow-up footage of the man explaining to the people that they took a perishable item that cost $2.00 (instant gratification) for a non-perishable item that is valued at more than $150 that they could have cashed in at any jewelry store or pawn shop.

Are these people that ignorant? The women certainly had to know the value of silver if they’ve ever purchased any silver jewelry.

Our coins used to be made out of gold and silver. The two governments debased their coins by switching to cheaper metals as the market value of silver rose above that of the face value. The silver coins disappeared from circulation as citizens retained them in anticipation of a rise in value in the future.

Dimes and quarters stopped being minted in 1964. Kennedy half dollars were struck in 90% silver in 1964. The following year, this was changed to silver-clad, with the silver content lowered to 40%. In 1971, the circulation coinage composition was changed a final time, eliminating all the silver, and using the copper-nickel clad standard common to the dollar, quarter, and dime. 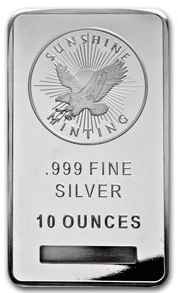 The purpose of using gold and silver as the basis of a monetary system is to keep governments from devaluing the currency and invisibly taxing the people and giving the illusion of prosperity.

How the faithful city has become a harlot,
She who was full of justice!
Righteousness once lodged in her,
But now murderers.
Your silver has become dross,
Your drink diluted with water.
Your rulers are rebels
And companions of thieves;
Everyone loves a bribe
And chases after rewards.
They do not defend the orphan,
Nor does the widow’s plea come before them (Isa. 1:21-23).