Why are most liberal women’s groups and high profile Democrat women not going after Biden over the sexual assault allegation? Because Democrat politics is all about abortion. They know Biden will vote that women have the right to kill their unborn babies. If some women were sexually assaulted by him, it’s the price that must be paid so they can assault the unborn child for their convenience. 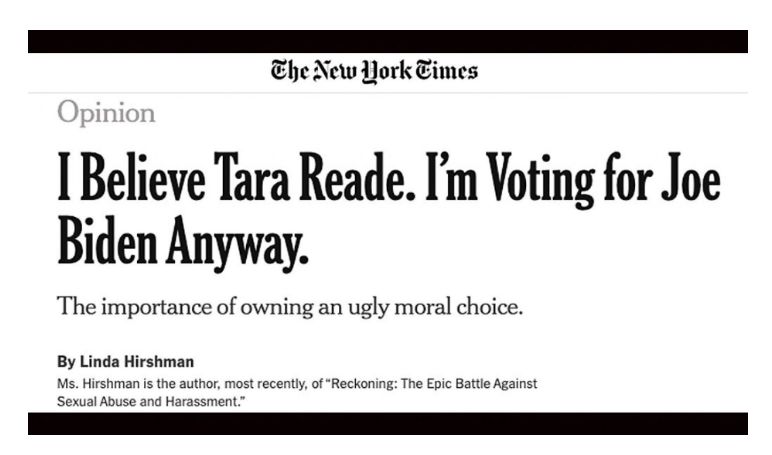 “So I hate, hate, hate to say the following,” Hirshman wrote. “Suck it up and make the utilitarian bargain…. I’ll take one for the team. I believe Ms. Reade, and I’ll vote for Mr. Biden this fall.” This does not mean that Biden will be protected forever. The alternative press has made it difficult to keep the truth locked up forever. The phone call to Larry King’s show by Tara Reade’s mother in 1993 shows there’s almost no place to hide. Cracks in the narrative are beginning to show. When CNN runs a story on the alleged incident, it’s time to pay attention.

(For a rehearsal of the charges against Brett Kavanaugh by Christine Basley Ford and how her testimony compares to Reade’s, read the outstanding article “Malignant Hypocrisy” by David Horowitz.)

In the end, however, the Democrats will find a way to uphold the sacrament of abortion if Biden steps down. Abortion is the mainstay of the party’s platform.

The rationale for killing unborn babies has been codified through a tortuous reasoning process. Depersonalization, an effective strategy used against Blacks and Jews, is the key.

Leftist Melissa Harris-Perry described an unborn baby “this thing” that costs money when born, implying that it’s better to kill him or her rather than give birth. Here’s what she said on her MSNBC morning show:

But the reality is that if this [as she holds up a marble-sized object representing the fertilized egg] turns into a person, right, there are economic consequences, right? The cost to raise a child, $10,000 a year up to $20,000 a year. When you’re talking about what it actually costs to have this thing turn into a human, why not allow women to make the best choices that we can with as many resources and options instead of trying to come in and regulate this process?

So, because a child costs from $10,000 to $20,000 per year, women should have the right to kill their unborn children. Why not extend that right to children already born? Some children might be “worth” keeping around. Maybe we should wait until a baby is born, give her a few years, and if she doesn’t measure up, take her to a State-sponsored and licensed extermination center.

Melissa Harris-Perry says that she understands how religious people argue that personhood begins at conception, that it’s “a particular kind of faith claim,” but such a claim “is not associated with science.” So, what is it about science that says a 5- or 7-year-old child is a person?

Science is not in the value judgment business. Scientists can measure brain waves, but they can’t say there’s a mind or if there is a mind whether it has any significance in a matter-only universe. Science can determine if a human meat bag is dead or alive, but it can’t say whether that meat bag’s life is worthwhile.

The net of science covers the empirical universe: what is it made of (fact) and why does it work this way (theory). The net of religion extends over questions of moral meaning and value. These two magisteria do not overlap, nor do they encompass all inquiry (consider, for starters, the magisterium of art and the meaning of beauty). To cite the arch cliches, we get the age of rocks, and religion retains the rock of ages; we study how the heavens go, and they determine how to go to heaven.

But evolutionists don’t believe in the reality of religion or the moral universe that is derived from God. Gould and other atheists borrow their morality from a worldview they work day and night to prove false and irrelevant.

Science can’t say whether what Adolf Hitler did was moral or immoral; it can only count the bodies and determine how they expired.

Melissa Harris-Perry finds it easy to argue for the pro-abortion position when she starts with a fertilized egg and moves toward birth since what can be seen is so small. Yet everything a human being is can be found in the union of sperm and egg.

By the way, Melissa Harris-Perry couldn’t argue the same way if she were holding some bird eggs. “The Migratory Bird Treaty Act (MBTA) prohibits the taking, killing, possession, transportation, and importation of migratory birds, their eggs, parts, and nests except as authorized under a valid permit (50 CFR 21.11).”

But what if the abortion argument started with a newly born baby and moved backward second-by-second to the point of conception?

Here’s a line of reasoning that I use with people who have not thought through the abortion issue but who would say that it’s up to the mother to make the decision.

I draw a horizontal line on a piece of paper capped on both ends with short vertical lines that represent the beginning and end of a nine-month pregnancy. I then ask: “At what point on this nine-month horizontal timeline would you say that it would be wrong to kill this unborn baby?”

They are initially reluctant, so I facilitate the process. “Would it be OK to kill the baby as soon as he or she is born?” (I draw an oval, representing the just-born baby, at the right-end of the vertical line.) No one says yes.

“How about when the baby is half in and half out of the birth canal?” (I draw an oval, so half the oval is bisected by the end portion of the vertical line.) Again, I get a “no.” “Would it be OK to kill an unborn baby when the crown of the baby’s head begins to show? “No” is still the most universal answer.

It’s at this point that I offer the pencil to anyone to mark on the line where it would be morally justifiable to kill the unborn baby. Most are non-committal because they begin to see the logic of what I’m doing.

Melissa Harris-Perry, who is black, has her own personhood problem. There was a time when it was thought that “the average intellect of the negro race … was exactly intermediate between the superior order of beasts such as elephant, dog, and orangutan, and Europeans or white men.”1

There’s nothing in science that says that it’s immoral to view blacks or whites as morally insignificant. “If we are all biological accidents, why shouldn’t the white accidents own and sell the black accidents?”2

Money is a Coward and Knows Nothing about Patriotism

The Rich, Taxes, and the Sin of Envy