Who is the Harlot of Babylon in Revelation?

When the world hiccups, prophetic speculators believe they have a cure by prognosticating on when the end might be. It’s an old process that has not made with much success. People have been predicting the end of the world or some version of it for centuries.

When our world is looked at through the lens of a block of time, it’s easy to conclude that this could be the end with wars, earthquakes, moons that look like are but aren’t, moral decline, and any number of end-time signs.

Being in the prophetic speculation business has not been kind to those who are thought to be experts or claim to have some unique insight into end-time events.

Brian Godawa has been following this path for some time. The following article unravels the mystery surrounding the Babylonian Harlot of the book of Revelation. – Gary DeMar

Every year, we are served up a platter of new predictions of doom by Christian Bible prophecy pundits who believe we are living in the end times. And every year, they are wrong over and over again. Blood moons, Shemitah, 1988, 1999, 2012, 2015, all predictions of the “last days” that never happened. How could all these well-meaning Christians be so consistently wrong? And is there a way to cut through all the wild speculation with some sane appreciation of Bible prophecy?

Here is the key: New Testament prophecy is a highly self-referential system of images and symbols that is rooted in a prophetic tradition of the Old Testament. If you want to understand what a prophetic symbol means in the New Testament, compare it with how that symbol was used in the Old Testament and you are guided to a much clearer picture than modern Christians have by imposing their own cultural bias onto the symbol.

A case in point is the Whore of Babylon, to which I will refer to as the Harlot that rides the Beast of Revelation. Who or what does the Harlot represent in the obvious symbolism of the prophecy? The predictions about her are in Revelation 17 and 18 and constitute the longest prophecy in the New Testament. The Babylonian harlot is an important symbol of judgment by God. There have been many interpretations of this spiritually unfaithful woman through history.

Today, Bible prophecy pundits claim a number of options: a reconstituted Roman Empire, or the Roman Catholic Church, or Islam, or even America. Most agree she represents a collective entity (empire, kingdom, nation, people) that is so evil and against Jesus Christ that the group of people she represents will be judged by God. That’s serious stuff, and certainly worthy of trying to figure out.

The problem is that some elements of prophecy can appear on the surface to be quite generic and applicable to a virtually infinite number of possibilities. For example, in Revelation 18, the Harlot is described as a great city that appears to be rich in resources and trade as well as political influence. But that generic image can be applied to every empire or powerful collective entity in history since the writing of the book of Revelation. It can be applied to hundreds of cities all along that timeline to this very day. Thus, prophecy pundits spend each decade detailing a myriad of factoids trying to link this generic description to their pet empire, kingdom, or nation. Just like they are doing today. And of course, they’ve always been wrong.

But when you look into the historical tradition of how that image of a harlot was used by the Jewish Old Testament prophets, it gives biblical definitions of clarification that end up precluding all the possibilities except one. It’s amazingly simple. And it’s in the biblical text. I’ll show you.

The metaphor of a harlot is a very common image used by Old Testament prophets. And it is always and only used in their prophecies as a symbol for spiritual adultery against Yahweh as a husband. Only a wife could be unfaithful to a husband. And Yahweh claimed that Israel was his only wife.

Marriage is a covenant of exclusive commitment. Yahweh was covenanted in marriage to one and only one nation in the ancient world: Israel. And this is why he was “jealous” over Israel’s faith as a husband would be jealous in demanding his wife’s exclusive sexual love. When Israel worshipped gods other than Yahweh, he would describe that in terms of spiritual adultery/unfaithfulness/whoring/harlotry.

(for you shall worship no other god, for the Lord, whose name is Jealous, is a jealous God), lest you make a covenant with the inhabitants of the land, and when they whore after their gods and sacrifice to their gods…

Judah has been faithless, and abomination has been committed in Israel and in Jerusalem. For Judah has profaned the sanctuary of the Lord, which he loves, and has married the daughter of a foreign god. (also: Deut 31:16; Lev 20:5-6; Hos 2:2; Jer 3:6; Ezek 6:9).

Yahweh would often call the city of Jerusalem a harlot as the representation of the rest of Israel (Isa 1:21; Ezek 23:4, 11-21). This was because the religious leaders of Israel were headquartered in the holy city with its temple as the house Yahweh shared with his “bride.” Religious leaders were the representative rulers of Israel and thus her proxies before Yahweh for both blessing and cursing (Matt 23:36-39).

Gentile nations were never called unfaithful harlots by the prophets because Gentile nations were not covenanted in marriage to Yahweh. You cannot commit adultery against someone if you are not married to him. Only a covenanted wife can be unfaithful. There are only two times where the metaphor of unfaithful harlot was used of Gentile cities: Nineveh (Nah 3:1-4) and Tyre (Isa 23:15). But upon closer consideration, these two cities were uniquely described as being covenanted to Yahweh. Nineveh had turned to Yahweh in faith (Jonah 3:5-10) and the king of Tyre was “covenanted in brotherhood” with Israel (Amos 1:9), helping Solomon build the temple (1King 5:7-12), the “house” where Yahweh dwelt with his bride.

Because Gentile nations and cities were not covenanted to Yahweh, they could not possibly be called spiritual harlots in the Bible. That would eliminate every modern suggestion of who the Harlot of Revelation is. Rome could not be the Harlot because Rome was never in covenant with Yahweh. Islamic nations or cities could not be the Harlot, and neither could America, or any other Gentile nation, because Islam, America, and other Gentile nations are not covenanted in marriage to Yahweh. Ancient Israel was the only nation in history that was covenanted with Yahweh. And with the coming of the new covenant messiah, Jesus, Yahweh divorced ancient Israel and married a new bride, His Church made up of believing Jews and Gentiles (Matt 21:40-45; Rev 21:9).

So even modern Israel could not be the Harlot. Only first-century Israel could be the Harlot in accordance with Scripture. Once Messiah came and inherited the nations through his death, resurrection, and ascension (Psa 2; 82), his kingdom became transnational. Yahweh no longer has a covenant with any specific nation because His covenanted people are in every nation on earth. His covenant now is exclusively with His people, the Church of believing Jews and Gentiles “from every tribe and language and people and nation” (Rev 5:19). So, is it possible that the Harlot is an apostate version of the Church? Nope.

There are many other proofs that indicate the Harlot can only be first-century Jerusalem led by the apostate priesthood. But space allows me only one more. And this one’s a QED knockout punch.

When prophecy pundits seek to answer the question, “what is the ‘great city?’” they invariably begin endless exegesis of history books and other prophecy writers to discover who it could be: Rome? Mecca? America? All the usual suspects. They exegete everything except the book of Revelation where John tells us explicitly what the great city is: He says it is first-century Jerusalem. Just turn a few pages back in the book of Revelation to chapter 11 and it’s there in black and white.

Revelation 11 tells us about the ministry of the Two Witnesses and how they are killed by the Beast. And then it tells us what happens next:

…and their dead bodies will lie in the street of the great city that symbolically is called Sodom and Egypt, where their Lord was crucified.

Jerusalem is symbolically called Sodom and Egypt, two of the three biggest enemies of God in Scripture. The other enemy was Babylon, which perfects the unholy trinity of condemnation that John is using to describe how apostate Jerusalem had become God’s enemy and was about to be destroyed by the Roman armies during John’s own era. The great city Jerusalem had become Sodom and Egypt and Babylon in God’s eyes.

However we interpret the rest of Revelation 18 and God’s judgment on her, John has told us that ancient Jerusalem is the great city. Not ancient or modern Rome, not Islam or America, or any other city in history. When God’s own Word tells us explicitly what the symbol means, looking elsewhere is a form of denial. We need to begin adjusting our preconceived theological systems to fit the Bible’s explicit definitions, not the other way around.

Biblically speaking, the only possible candidate for the Harlot of Revelation is first-century Jerusalem led by the apostate priesthood of Israel. This would create a shock to many people’s theological systems. If first-century Jerusalem was the fulfillment of the Harlot, then that would mean that the judgment of Revelation occurred in the first century. This does not comport with the futurist assumptions of many Christians who believe that the prophecies of Revelation are only for our future. But fidelity to Scriptural interpretation requires it. That means there are plenty of questions that Christians will need to have answered. What did that look like? How is all the other symbolism to be reinterpreted in that first-century context?

That is what I am doing with my novel series, Chronicles of the Apocalypse. I tell the origin story of the book of Revelation and how its symbols were understood at the time John wrote it. But instead of a book on theology, I’ve written a dramatic narrative series of novels that is both entertaining and informative. I weave Scripture, history, and fiction together. I depict the Harlot as first-century Jerusalem led by apostate Jewish religious leaders who had rejected Messiah. They suffer under the judgment of having their holy city and temple trampled underfoot by the Roman Empire of Nero Caesar. Readers will understand Revelation like never before as they experience it through the eyes of the first-century Christians to whom it was written. Oh, and there are angels and demons, so get ready for spiritual warfare Armageddon.

It all begins with Tyrant; Rise of the Beast. 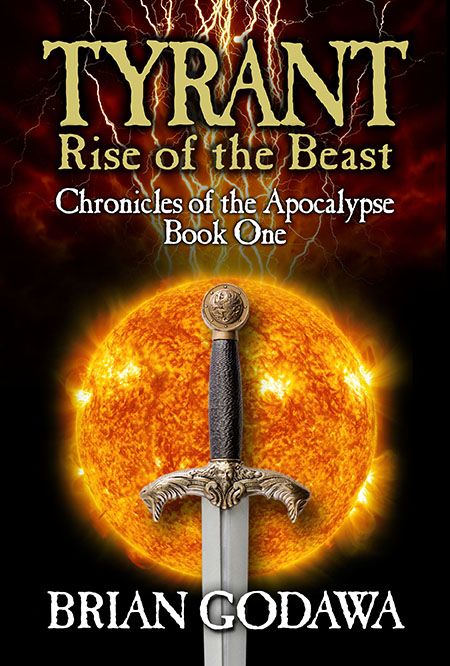 Brian Godawa is an award-winning Hollywood screenwriter (To End All Wars), a controversial movie and culture blogger (www.Godawa.com), an internationally known teacher on faith, worldviews and storytelling (Hollywood Worldviews), an Amazon best-selling author of Biblical fiction (Chronicles of the Nephilim), and provocative theology (God Against the gods). His obsession with God, movies and worldviews, results in theological storytelling that blows your mind while inspiring your soul. And he’s not exaggerating.

'Bind, Torture, and Kill’ Murderer Is the Epitome of Blind Moral Indifference

Who is the Harlot of Babylon in Revelation?