What The ‘In-N-Out Burger’ Boycott Tells You About Democrats

When a political party starts attacking private businesses because of the donations they make, it should be over for that political party. The Democrat Party is evil.

Have you noticed how Democrats have been slobbering all over themselves at John McCain’s funeral? When he ran against Obama in 2008, McCain was attacked without mercy. It was only when McCain turned on his own party and started attacking Trump that they got all teary eyed. The same with Never-Trumper Republicans like Jeff Flake.

The economy is roaring. Jobs are increasing. Help Wanted signs are up all over. GDP is over four percent. The stock market is at historic levels. Black unemployment is at historic lows. NAFTA is about to bite the dust.

Back to the food fight that Democrats keep waging against companies that don’t cater to the Leftwing social and political narrative. The biggest fight has been with Chick-fil-A. The following is from an article in The Atlantic:

New York has taken to Chick-fil-A. One of the Manhattan locations estimates that it sells a sandwich every six seconds, and the company has announced plans to open as many as a dozen more storefronts in the city. And yet the brand’s arrival here feels like an infiltration, in no small part because of its pervasive Christian traditionalism.

Then there’s this from the fascist mayor of New York:

Councilman Daniel Dromm was even more blunt – accusing the Southern restaurant chain of spreading a “message of hate.”

Who knew that with every Chick-fil-A sandwich you get a message of hate. I’ve eaten at Chick-fil-A and I’ve never seen or heard one of the messages of hate. Yes, the owners of Chick-fil-A oppose same-sex marriage. So do millions of other people. No one at Chick-fil-A is discriminating against homosexual customers. No one is asking customers what kind of sex they engage in.

Chick-fil-A serves great food, employs thousands of people at its more than 2,200 restaurants, is closed on Sunday so employees can rest and worship at their leisure. Then there are the many charity works the company is involved in.

All sorts of companies have supported same-sex sexuality with their products. Burger King, Oreos, and Ben & Jerry’s come to mind. But that’s OK since same-sexuality is the Left’s second holy sacrament next to killing unborn babies. Death and sexual perversion are celebrated while companies like Chick-fil-A and In-N-Out Burger express themselves quietly without fanfare:

In-N-Out Burger of California is being attacked like Chik-fil-A. The company’s crime? It donated $25,000 to Republicans!

California Democratic Party Chairman Eric Bauman is calling for a boycott of In-N-Out Burger after the Irvine-based fast-food chain this week donated $25,000 to help Republicans this November.

It’s not enough that the media and social networks are censoring conservative speech. Now we’ve got politicians with power trying to put a thriving company out of business to force it to bend to a corrupt political party.

It should be noted, as USA TODAY reports, that “In-N-Out donates to both sides of the aisle: According to the magazine, the chain has given tens of thousands of dollars to ‘Californians for Jobs and a Strong Economy,’ a political action committee that aims to elect moderate Democrats.” And get this:

The company confirmed to USA TODAY this year that its store managers earn six-figure salaries. Entry-level employees start at $13 an hour, above California’s $11 minimum wage.

Democrats are all about jobs. If the people of California boycotted In-N-Out Burger, thousands of people would lose jobs, not just at the burger facilities but all the way down the food chain of suppliers. That doesn’t matter to Democrats because they don’t care about people. They only care about power.

Not all Democrats support the boycott:

Anthony Grigore is a Democrat. But as he waited Thursday at an In-N-Out Burger in El Segundo for his meal, Grigore made it clear party loyalty would only go so far.

Just hours earlier, the head of the California Democratic Party called for a boycott of the famed burger chain after a public filing revealed that the company had recently donated $25,000 to the state’s Republican Party.

“Eating at In-N-Out is such a standard thing to do across California,” Grigore said, dismissing the boycott idea as a bit silly.

In-n-Out Burger also prints references to Bible verses on the bottom of their cups, including John 3:16 and Proverbs 3:5: “Trust in the Lord with all your heart and lean not on your own understanding.” I’m surprised it’s taken this long to attack the burger company. 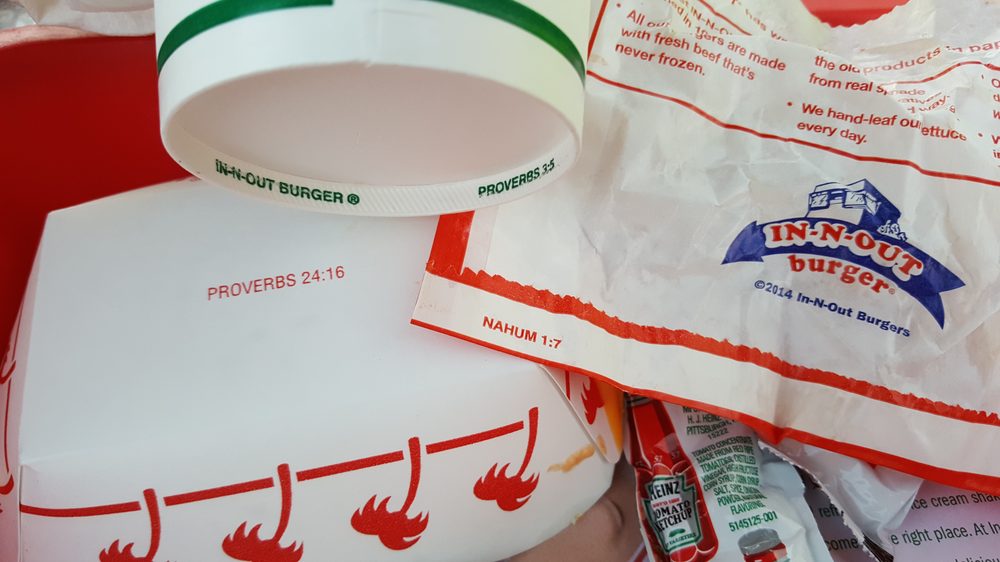 An Answer to Progressivism in Less than Three Minutes

Are Evangelicals Confusing the Gospel with Christian Nationalism?

What The ‘In-N-Out Burger’ Boycott Tells You About Democrats