What Should the Punishment Be for Jussie Smollett’s Lying Hoax?

It’s looking bad for Jussie Smollet. He’s no longer the victim. He’s the accused. Not only did he fabricate the story, but he played it out in real time. He not only committed a crime, but he conspired with others to advance the crime in the defamation of President Trump and his supporters.

Similar lies and accusations seem to be standard fare among those on the Left. Bret Kavanaugh was paraded through the gauntlet of false and unsubstantiated testimony. His life and that of his family were nearly ruined.

Sixteen-year-old Nicholas Sandmann nearly had his life ruined because of a rush to judgment based on the way he smiled. The only thing the media got right was that he was wearing a MAGA hat. That was enough to destroy his reputation and, once again, painting supporters of Trump as intellectual and moral blackguards.

His lawyers are suing the Washington Post for $250 million.

The Post wrongfully targeted and bullied Nicholas because he was the white, Catholic student wearing a red ‘Make America Great Again’ souvenir cap on a school field trip to the January 18 March for Life in Washington, D.C. when he was unexpectedly and suddenly confronted by Nathan Phillips (‘Phillips’), a known Native American activist, who beat a drum and sang loudly within inches of his face (‘the January 18 incident’).

Documentarian Ken Burns produced a film about how in 1989 five New York City teens were falsely charged with rape. “‘The Central Park Five,’ . . . lets the five victims recall that tumultuous time in their lives and documents just how much the false charges crushed their youth.” It’s a tragic story that needs to be told.

False charges of sex crimes are not new. Lesbian Charlie Rogers invented a story where she claimed to be “accosted in her own home . . . by three men who bound her, carved anti-gay slurs into her skin and tried to burn the place down. . . .” After a thorough investigation, “police said that evidence uncovered during the course of the investigation revealed that the victim herself was the likely assailant.”

Rogers was found guilty of filing a false report. She claimed that “three men broke into her house, tied her up, carved anti-gay slurs into her skin and tried to light the house on fire.” She was sentenced in 2013 to 250 hours of community service

Then there’s the Duke Lacrosse Case. In 2006, three members of the men’s lacrosse team at Duke University were accused of raping Crystal Gail Mangum, an African American student who attended North Carolina Central University. Players were suspended, the coach was forced to resign by the athletic director, and Duke President Richard Brodhead canceled the rest of the 2006 season. The accusation proved to be false.

Jesse Jackson supported the false accuser to such an extent that his non-profit Rainbow/Push Coalition organization offered to pay her tuition whether she fabricated the story or not. “A poster that ‘looked like a wanted poster’ was distributed on campus and in nearby neighborhoods shortly after the allegations surfaced in March 2006 showing pictures and names of 40 members of the lacrosse team, urging them to ‘come forward’ with information on the alleged rape.”

Ken Burns described the Duke Lacrosse players who were charged with rape as “three rich white boys who were mildly inconvenienced by rape charges that proved to be false.” Burns went on to say, “In no time the prosecutor of that case was fired, disbarred, and put in jail, and the three ended up getting a huge settlement.”

“In no time” was actually 15 months. The story was front-page news in every news outlet around the world. A group of 88 Duke University professors added their names to an advertisement that was published in the Duke Chronicle “implying that the charges were true.”

Even after it was learned that the accusations were false, Duke Faculty member Wahneema Lubiano declared that the players could never be cleared, no matter what the evidence. Lubiano considered the team members to be “‘almost perfect offenders,’ since they are ‘the exemplars of the upper end of the class hierarchy, the politically dominant race and ethnicity, the dominant gender, the dominant sexuality, and the dominant social group on campus.’” Lubiano promised to continue to pursue justice regardless of the “truth.”

Here’s the link to 21 fake hate crime hoaxes promoted by the left since Trump took office.

How will Smollett defend himself? First, he’s claiming he didn’t do it. The presumption of innocence is part of nation’s legal system, unless, of course, you’re a conservative.

Second, he and his lawyers might shift the blame to the Chicago police department. “I think there are issues with the Chicago Police … as a general proposition,” attorney Ben Brafman said. “Whether or not [Chicago Police] are alleged to have treated people of color fairly, whether or not they are capable of doing an investigation without any difficult issues arising.” (Inside Edition)

Third, he’ll blame it on drugs. “During his arrest he reportedly told officers he struggled with drugs and had never been treated.”

Fourth, if he comes around and admits he lied and fabricated the story, he will argue that almost no one is ever punished for making false reports. Alan Dershowitz, trial lawyer and law professor, mentioned Tawana Brawley who perpetuated her fraud and went on to some fame, namely Al Sharpton.

We should keep in mind that millions of dollars have been spent on following the leads of a police report filed by Smollett.

Giving false testimony is a serious offense. Biblical Law prohibited false swearing (Lev. 19:12; Ex. 20:7) and giving false testimony as a witness (Ex. 20:16). Giving false testimony was punishable with the sentence which would have gone to the one falsely accused of guilt (Deut. 19:16–21). This helps us understand the meaning of Matthew 7:1-2. Jesus isn’t opposing judging. He’s opposing hypocritical and inconsistent judging. Smollet called for “truth” on numerous occasions. He even wore a shirt emblazoned with the word ‘TRUTH.’ And by all accounts, he has lied about many things. Smollett family, said, “We want to be clear, this was a racial and homophobic hate crime.” If the evidence stands up, this turned out to be a lie. By his lies, people who have been attacked may not be believed. He’s made it harder for them to be believed.

Smollet’s claim, even with all the evidence in, is still being used as a political hammer by the Left. Some are saying that Pro-Trump Chicago police rigged the investigation to harm Smollett seemingly forgetting that it was Smollett positioned the alleged attack as political. Zach Stafford of the pro-homosexual Advocate magazine, “twisted himself into pretzels trying to rationalize and make excuses for Smollett’s actions, even saying at one point that ‘Jussie may have created this whole situation to highlight a reality that is happening every day’—’our current administration doesn’t support people like him — [people who] are black and queer.'” Nearly entire Left-side of the political spectrum wanted Smollett’s story to be true for political purposes. This is why Jesus said, “Do not judge according to appearance but judge with righteous judgment” (John 7:24).

Jesus was indicted in a religious court for blasphemy (Matt. 26:59-62) and was tried before Herod and Pontius Pilate (Luke 23:1-11) where false testimony was used against Him. 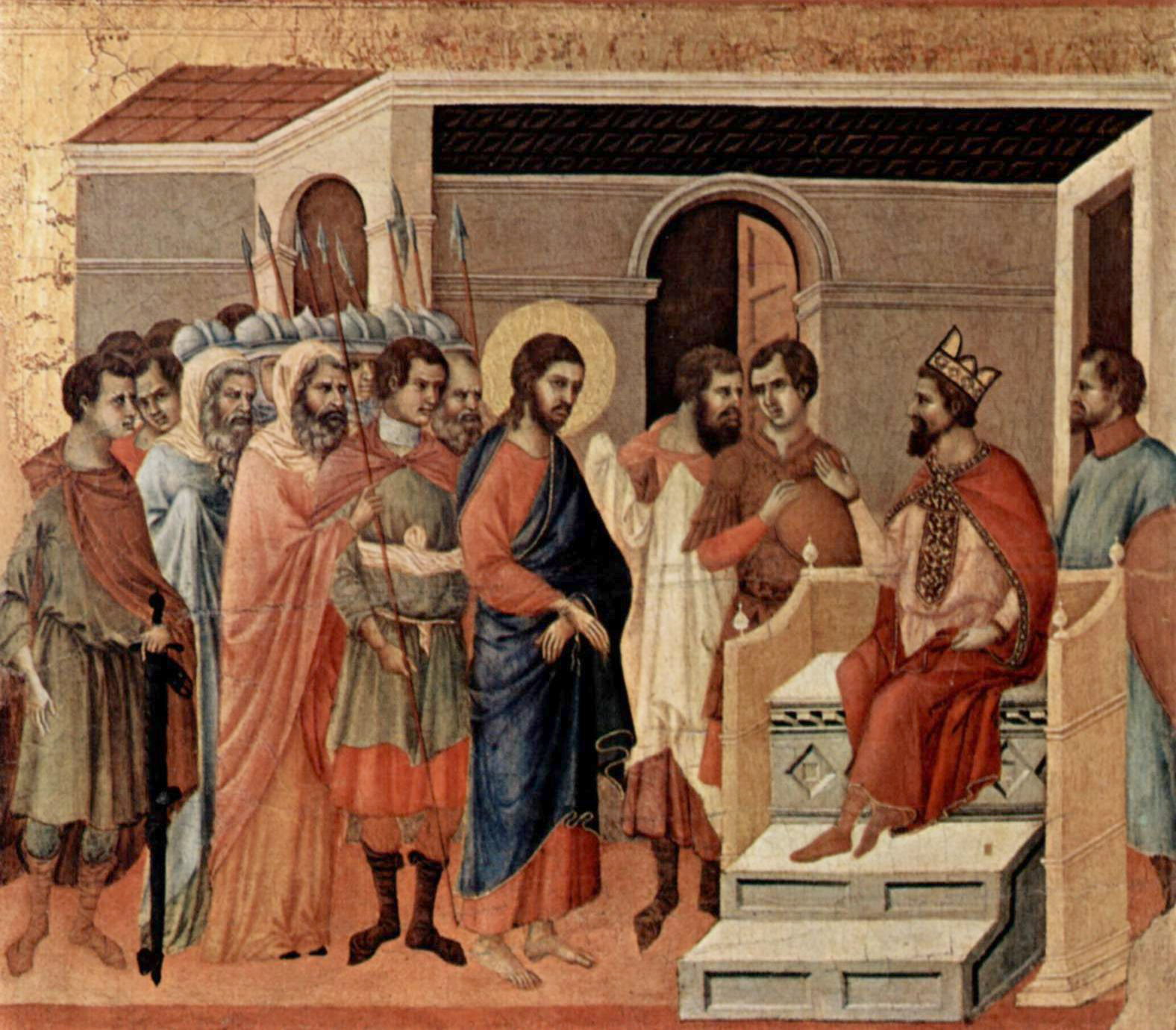 These types of incidents could be curtailed if this law were applied today. That way, all the political correctness could be removed.

Dershowitz, who described himself as “agnostic leaning toward atheist,” cites the Bible when asked about the punishment side of the Smollett case if he’s found guilty of the charges:

I believe people who file false reports should go to jail. In the Bible, if you falsely accuse somebody, you get the penalty the person would have gotten had the accusation been true. So, if in fact, these people had attacked them in this racist way and put a noose around his neck, they would have gotten some years in jail. If you are going to follow the Bible, this guy should get the same penalty that he falsely accused other people of [doing].

The application of this law would go a long way to stop a lot of false accusations – and there are many of them – especially those that are personally and politically motivated.

What Should the Punishment Be for Jussie Smollett’s Lying Hoax?