Should Wedding-Related Businesses Be Forced to Serve Gays?

The simple answer is no.

There’s a new study out that once again shows we are a divided nation, not only on race and abortion (and so many other issues) but also on same-sex marriage. It’s not enough that laws are being changed almost daily, but now businesses are being put into a position of going against their religious convictions and their free-speech rights by being forced to service people who they believed are engaged in immoral behavior:

“Americans are starkly divided over whether wedding-related businesses should be forced to serve gay and lesbian clients, according to new survey results from the Pew Research Center.

“When asked whether businesses should be permitted to refuse matrimonial service based on ‘religious reasons,’ 47 percent of respondents agreed that they should, while 49 percent said owners should be required to serve gay couples; four percent didn’t know which side to take.

“The study, which measures numerous facets pertaining to faith in American life, also found that the vast majority of respondents (72 percent) believe that religion is losing its influence in American society.

“But most aren’t happy with this change, with 56 percent of the nation calling it a negative development.”

Let’s ask these same 49 percent if (1) they own a business and (2) if they do, what kind of business is it. Then let’s ask them (3) if they had a wedding business should they be forced to service a couple who want a KKK wedding, a white supremacy wedding, or a theme wedding that was objectionable to the owners?

Should a gun store refuse to sell a gun to somebody because the owner just doesn’t like the guy’s attitude and demeanor?

Should all businesses be forced to service every person or group that asks for service? Why are businesses only being forced in the area of same-sex marriage?

Should a black printing business owner be forced to supply fliers and posters to a “white supremacy” rally?

Should “gay” owners of a venue be forced to open it up to a group that wants to hold a conference on the dangers of the homosexual movement and the negative effect of same-sexuality on minor children? 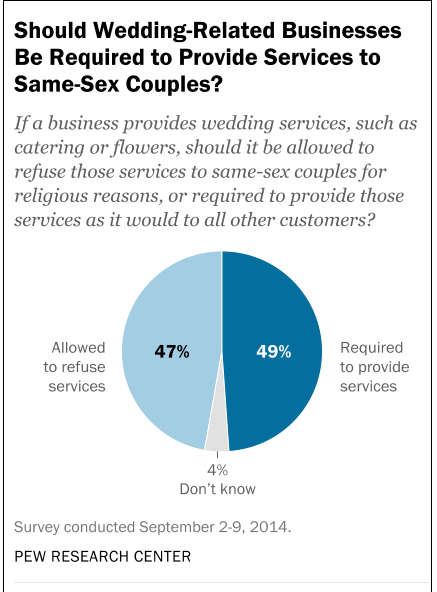 Venues all across the United States discriminate for any number of reasons, as they should be allowed to do so.

There are companies and people that I will not do business with, and it’s nobody’s business as to why. The same is true for every business owner.

Should I be forced to hold a wedding reception at a business owned by homosexuals when I find out that they are homosexuals? Hell no. why should I be forced to fund something I don’t believe in. The same is true if I want to refuse to do business with some liberal group. I won’t purchase Progressive Insurance because of the company’s liberal corporate agenda.

This is a free country. If you don’t like doing business with me, you can go elsewhere. The same is true of “gay” weddings, “gay” bakeries, gay “photographers,” and “gay” florists.

I would never think of suing a business owner because he refused to do business with me. How childish. I’ll take my money and pay someone else.

Go and do likewise.

If judges and city councils can force some people to do something with their businesses today, then there’s a good change that they can add to that list of business compliance tomorrow.

Should Wedding-Related Businesses Be Forced to Serve Gays?