If You Want to See What Political Street Violence Can Become, Watch This Film

My wife and I are always looking for good films to watch. We’ve come across quite a few recently. The most recent is the 2015 film Michiel de Ruyter, called The Admiral in the English version. It’s based on the life of Dutch admiral Michiel Adriaenszoon de Ruyter (1607–1676). De Ruyter was “one of the most skilled admirals in history, most famous for his role in the Anglo-Dutch Wars of the 17th century. He fought the English and French and scored several major victories against them, the best known probably being the Raid on the Medway.”

The film is mostly in Dutch with Engish subtitles that’s easy to follow. It’s a great action film, and the history is true to form.

One of the subthemes is the murder of Johan de Witt and his brother. Because of a bad military decision, a number of crazed rioters executed the brothers in the streets:

“In the hysteria that followed the effortless invasion by an alliance of three countries, he and his brother Cornelis de Witt were blamed and lynched in The Hague, whereafter rioters partially ate the brothers. The rioters were never prosecuted, and historians have argued that William of Orange may have incited them.”

That’s right. They were disemboweled, the penis of Johann cut off, and their bodies cannibalized. In the painting below, you can see the progression of the crime. Their naked bodies can be seen lying in the street in the center right of the painting and then later hanging upside down on wooden posts. 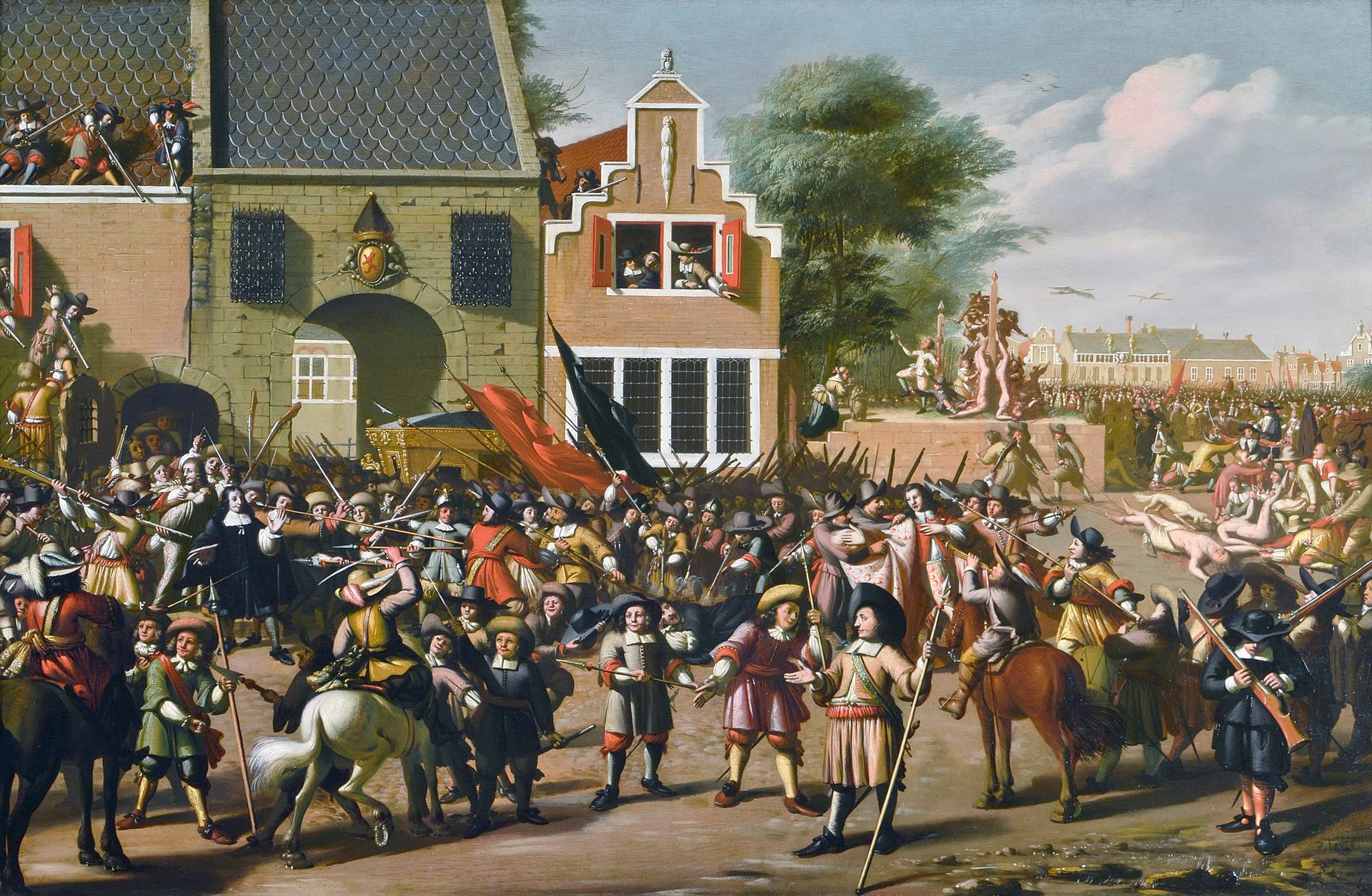 Here’s a detail of a painting showing the brothers gutted by the mob. 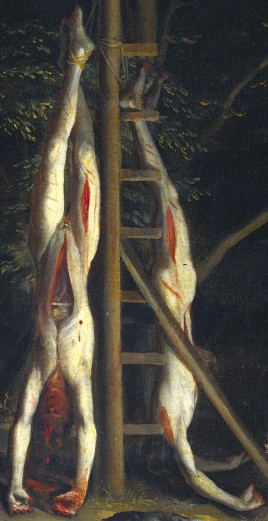 From a political dispute, some people believe they are justified in breaking the law to achieve their political ends. A gunman who was a supporter of Democratic presidential candidate Bernie Sanders attacked Republican congressmen at a baseball practice, critically wounding House Majority Whip Steve Scalise and injuring four others. James T. Hodgkinson was the shooter. His Facebook page was filled with anti-Trump rhetoric. Hodgkinson was a member of Facebook groups “Terminate the Republican Party” and “The Road to Hell Is Paved With Republicans.”

Liberals have given their full support to the so-called Anti-Fascist mob. The goal has been to quash all political dissent coming from conservatives. Every time a conservative is invited to speak on a university campus, there are fears of violence, not from the conservatives, but from the leftist radicals.

In Berkeley, police literally stood back and let the riot unfold, later defending their passive approach on the grounds that actually enforcing the law could have caused greater injury. As it was, they intervened on a case-by-case basis to stop individual beatings and let rioters vandalize 15 buildings. University police made one arrest. City police reported zero arrests on the night of the riots. (National Review)

It hasn’t gotten to the point of murdering the political opposition and removing their entrails, but if they are given enough spurious justification from their ideological compatriots, it could happen. Actually, it did happen. We do know that Floyd Lee Corkins, who opened fire at the Family Research Council, injuring a guard before he was subdued, was not a far-right militia type. In fact, he was in full agreement with the “hate-group” label stamped on many conservative groups.

“The day after Floyd Corkins came into the FRC headquarters and opened fire wounding one of our team members, I stated that while Corkins was responsible for the shooting, he had been given a license to perpetrate this act of violence by groups like the Southern Poverty Law Center which has systematically and recklessly labeled every organization with which they disagree as a ‘hate group.’

“Today both assertions were validated in court as Corkins plead guilty to multiple criminal charges, including terrorism. The Southern Poverty Law Center can no longer say that it is not a source for those bent on committing acts of violence.  Only by ending its hate-labeling practices will the SPLC send a message that it no longer wishes to be a source for those who would commit acts of violence that are only designed to intimidate and silence Christians and others who support natural marriage and traditional morality.”

Corkins was carrying 15 Chick-fil-A sandwiches in his bag when he was taken into custody. He wanted to kill people and put a bag next to each victim. The SPLC had designated the Family Research Council as a “hate group” because of the organization’s views on homosexual practices and homosexual marriage.

Rob Ranco is a lawyer from Texas. He is a partner in The Carlson Law Firm. Here’s a short bio of Ranco from the firm’s website:,

The quick witted, Ivy League educated lawyer with an easy going attitude and an appreciate [sic] for the arts, Robert Ranco practices Civil Litigation, including Personal Injury and Civil Rights cases all around Texas, and throughout the United States. He earned his B.A. at Dartmouth College and attained his J.D. from the University Maine School of Law. Rob originally started working with The Carlson Law Firm in 2001. A member of the State Bar of Texas, the Texas Trial Lawyers Association, Capital Area Trial Lawyers (CATLA) and the Williamson County Bar Association, Mr. Ranco is also licensed in several Federal Courts. Rob attained the largest Civil Rights verdict in Texas for 2016 in a case against the Austin Police Department for excessive use of force against an innocent citizen.  Rob is also an advocate for domestic adoption. He is married to his beautiful wife, Tonia, and together they have four children: Eric, Hanna, Tori and Kasey. posted the following:

He posted the following on Twitter in response to Betsy De Vos’ comments about Title IX and sexual assault. Civil discussion and disagreement are appropriate, but not something like this:

Mr. Ranco cut off access to his Twitter account sometime early on Saturday morning (9/9/2017) when his tweets drew significant criticism. In trying to make an argument, he made a serious mistake and may have given the idea to some numbskull that rape may be OK if the political results are beneficial.

What's the Cause of the Recent Hurricanes and Earthquake? Judgment? Last Days?

If You Want to See What Political Street Violence Can Become, Watch This Film