It’s almost a forgone conclusion that liberals will use the Bible to support a cause if they can find something in it that they can use to defend a pet policy.

“Putting aside that Mosaic Law would prohibit refugees from worshiping Allah, demand the death penalty for many of the core activities of the sexual revolution, and impose dietary restrictions that the latté Left might find a bit onerous, we can see that these critics are making a basic error: interpreting commands directed at individuals as mandates for national policy. Jesus commanded his followers to ‘not resist an evil person’ — to turn the other cheek when struck and to hand over your coat when they demand your shirt [Matt. 5:39-45]. He did not mandate that we surrender New Mexico if an invader demands Texas, or capitulate to Japan when it bombs Pearl Harbor.”

President Obama has ridiculed those who want to be cautious about letting in tens of thousands of un-vetted Syrian refugees. Some say the number is closer to 200,000 over several years.

Addressing Republicans, even though some Democrats are also opposed to his open borders policy on the Syrian refugee crisis, here’s what he said on the subject:

Read related article: “The Christmas Story is Not about a Refugee Family.”

I suspect that if only widows and three-year-olds made up the vast influx of refugees, most Americans would get behind the effort even though according to a story from PBS’s Frontline, “ISIS fighters ‘say all local children are educated by the Islamic State from the age of three.’” (H/T: Breitbart). Let’s not forget that a female Paris terrorist blew up herself and a woman in Israel tried to stab an Israeli border guard.

This isn’t to say that women and children are not refugees. It’s what’s hidden among the legitimate refugees that worries most Americans. It is not beyond the tactical advantage of radical Islamists to use women and children in their efforts to extend terror and fear. Who would suspect women and children? The following is from the Huffington Post:

“[M]ore than 120 boys were each given a doll and a sword and told, cut off its head. A 14-year-old who was among the boys, all abducted from Iraq’s Yazidi religious minority, said he couldn’t cut it right. He chopped once, twice, three times.

“Because Hamas, desperate to win world sympathy by any means, has always been happy to use Palestinian innocents as human shields — the more casualties, the better.” 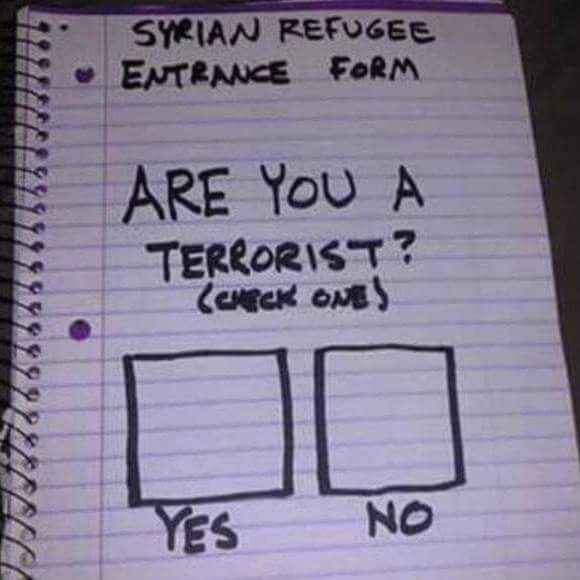 Christians are required to use discernment and wisdom regarding the way help is offered (Acts 6:1-3). There are “widows who are widows indeed,” and then there are widows who have children and grandchildren who were “to make some return to their parents” (1 Tim. 5:4-5).

John tells us to “test the spirits.” If there are “false prophets,” you can be sure there are false refugees (1 John 4:1). In another place he writes: “If anyone comes to you and does not bring this teaching, do not receive him into your house, and do not give him a greeting” (2 John 1:10). There are boundaries and exceptions. Knowing those boundaries takes wisdom and discernment

With all the biblical injunctions about caring for widows and orphans, there is also this injunction: “Behold, I send you out as sheep in the midst of wolves; so be shrewd as serpents and innocent as doves” (Matt. 10:16).

The apostle Paul issued the following warning to the church elders in Ephesus:

“Be on guard for yourselves and for all the flock, among which the Holy Spirit has made you overseers, to shepherd the church of God which He purchased with His own blood. I know that after my departure savage wolves will come in among you, not sparing the flock; and from among your own selves men will arise, speaking perverse things, to draw away the disciples after them” (Acts 20:28-30).

Advocating for widows and orphans is a biblical command, and so is being wise and on guard for “savage wolves” hidden among the lambs. Civil officials should show the same discernment and wisdom in their positions as civil governors.

The Christmas Story is Not about a Refugee Family

What About Whoopi Goldberg's Claim that Adolf Hitler Was a Christian?