If the nation is really serious about race, then it’s time we put our politics where our mouth is. The following article headline caught my attention:

“Black caucus has had it with Trump, plans to discuss impeachment”

The Congressional Black Caucus, a formidable bloc of lawmakers with a big say in the fate of President Donald Trump and his legislation, Monday sent him a terse, clear message: We don’t think you understand us at all.

The caucus’ chairman Monday urged cancellation of next month’s highly-anticipated meeting between White House officials and leaders of the nation’s historically black colleges. And he plans to have the 49-member caucus meet when Congress returns in two weeks to discuss whether to back Democratic-led efforts to impeach Trump.

I’m OK with elected officials who want to impeach Pres. Donald Trump. I think it’s stupid, but it’s their right. But it should not be done by a group called the “Congressional Black Caucus” since it comes across as racial. In fact, there shouldn’t be a Congressional Black Congress because it’s divisive.

If color and race are not supposed to be issues, then why are they made issues by those who claim color and race should not be issues? We won’t get beyond race until everyone agrees to stop making everything about race.

I know the immoral history of slavery and the travesty of racial indignities and political oppression. But if we are going to get beyond our past by dismantling statues and memorials of a war that was fought over slavery, then it’s time we dismantle all remnants of that awful history.

The NAACP, the National Association for the Advancement of Colored People, was “formed in 1909 as a bi-racial organization to advance justice for African Americans by W. E. B. Du Bois, Mary White Ovington and Moorfield Storey.” The NAACP was needed in 1909. Its mission in the 21st century is said to be “to ensure the political, educational, social, and economic equality of rights of all persons and to eliminate racial hatred and racial discrimination.” That’s still a lofty and needed ideal, but it’s time to change its name. The racial component needs to go.

I’m afraid, however, that those associated with the Congressional Black Caucus, the NAACP, Black Lives Matter, and other black sponsored special interest groups will be reluctant to make the change because there’s money to be made over race. As long as blacks are seen as an oppressed minority, there will always be people who will use that narrative to raise money.

Booker T. Washington (1865–1915) warned of such people within the black community in his 1911 book My Larger Education. He described them as “problem profiteers”:

There is another class of coloured people who make a business of keeping the troubles, the wrongs and the hardships of the Negro race before the public. Having learned that they are able to make a living out of their troubles, they have grown into the settled habit of advertising their wrongs – partly because they want sympathy and partly because it pays. Some of these people do not want the Negro to lose his grievances, because they do not want to lose their jobs.

For healing and unity to take place, all sides need to give up their attachment to the past. I’m not saying it will be easy, but it’s necessary. That way, those who are committed to unity can fight the baser elements in our society who stoke the fires of resentment. While fund-raising organizations like the Southern Poverty Law Center (SPLC) publish maps of “hate organizations” in a claim to expose their definition of hate (anyone who opposes their very leftist worldview), they only fan the flames of division for political and monetary gain.

The goal of those supporting the SPLC, for example, Apple and the Clooney Foundation for Justice, co-founded by George and Amal Clooney, and J.P. Morgan, because of a small group of nobodies who protested the removal of a statue of Robert E. Lee is only contributing the division. These high-profile companies and people need to do some research on the SPLC. The organization’s goal is to keep the divisions hot. Like those “problem profiteers” in the Black community, the SPLC has been a problem profiteer for decades.

As the SPLC publicizes the names of ever more hate groups to “raise awareness” of intolerance and to tap into ever new sources of funds, its donors should keep in mind a genuine larger truth. Heightened awareness has never by itself helped the actual victims of anything, anywhere, at any time. At best, it is entirely self-referential. At its worst, it serves as a useful ploy to make a donor who hasn’t done much in the way of due diligence about an organization’s finances feel good about sending money to what appears to be a righteous cause…. (American Thinker)

Most so-called “white people” are not racists, Neo-Nazis, or white supremacists. Many of us are descendants of immigrants who did not come to this country until the 20th century. We had no part either in slavery or segregation. The claim is made that even recent immigrants have benefitted from the slave labor of blacks. But so have blacks who were never slaves. Stoking the fires of division will only create more divisions. People don’t like to be called “racist” when they aren’t. You won’t find the SPLC going after a public school teacher who told his class, “To be white is to be racist, period” or when a Black woman gives a lecture declaring “ALL WHITE PEOPLE ARE RACIST” (notice PAYPAL ME). There’s no money in it, and it doesn’t fit the “hate” narrative of the Left. 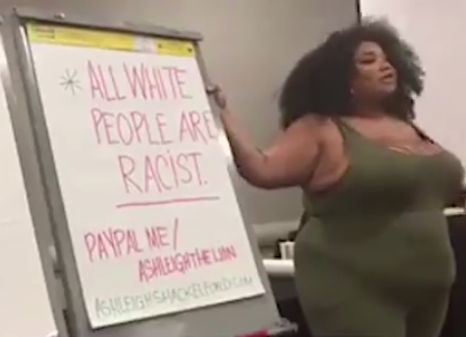 Racialism is a one-way street. Only white people can be racists. To say otherwise is to be a racist. Even the solar eclipse was made into a topic about race.

“It has been dubbed the Great American Eclipse, and along most of its path, there live almost no black people. Presumably, this is not explained by the implicit bias of the solar system. It is a matter of population density, and more specifically geographic variations in population density by race, for which the sun and the moon cannot be held responsible.” (The Atlantic)

No, she did not say it was racist, as some sites declared. But was it necessary to bring race into an event that actually brought the nation together? Yes. Because the Left needs race to be a divisive topic to keep us divided. Money and power drive the division. Who are the losers? The people the “problem profiteers” claim to be helping.

Tim Cook of Apple, the Clooneys, and J.P. Morgan just got snookered, and so have the American people.

Use One Word to Defend Offensive Monuments. Call it 'Art.' That's What Liberals Do.