The history behind the inclusion of “Natural Born Citizen” in the Constitution was proposed by one man – John Jay.

This was not enough for Jay who on July 25, 1787 wrote the following letter to George Washington, the presiding president of the Convention:

“Permit me to hint, whether it would not be wise and seasonable to provide a strong check to the admission of Foreigners into the administration of our national Government, and to declare expressly that the Command in chief of the American army shall not be given to, nor devolve on, any but a natural born Citizen.” 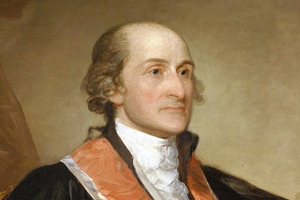 It’s important to note that if the Natural Born Citizen requirement had been applied as some are applying it today, James Wilson (born in Carskerdo, Scotland), Alexander Hamilton (born out of wedlock, raised in the West Indies), and Robert Morris (Liverpool, United Kingdom) would not have qualified since they were born abroad to parents who were not American citizens. They were by definition “foreigners.” This is why Article Two, section 1 includes an exception for their specific circumstances:

“No Person except a natural born Citizen, or a Citizen of the United States, at the time of the Adoption of this Constitution, shall be eligible to the Office of President; neither shall any Person be eligible to that Office who shall not have attained to the Age of thirty-five Years, and been fourteen.”

“While the Committee on Detail originally proposed that the President must be merely a citizen as well as a resident for 21 years, the Committee of Eleven changed ‘citizen’ to ‘natural born citizen’ without recorded explanation after receiving Jay’s letter. The Convention accepted the change without further recorded debate.”

“Without explanation” is the problem.

Let’s go back to John Jay. Remember, it was Jay who wanted the “natural born Citizen” requirement included.

Here’s the question: Would Jay’s two surviving children have been eligible to be President since they were born in Spain if the exception had not been written into the Constitution since his children were born prior to its passage and on foreign soil?

Did he really have his type of situation in mind when he proposed the “Natural Born Citizen” requirement, that children born abroad to parents who were born and raised in the United States would be excluded from running for President of the United States out of a divided loyalty? It didn’t seem to be a problem for Hamilton, Wilson, and Morris who were born abroad to foreign parents.

Ted Cruz was born in Canada in 1970 to a mother who was a United States citizen. He lived in Canada for four years but “grew up in Texas and graduated from high school there, later attending Princeton University and Harvard Law School.” (H/T: Politifact)

These facts make Ted Cruz more of an American than some of the drafters of the Constitution.