Most people evaluating the Trump presidency focus on policy issues, the economy, and the courts. For conservatives, these are mostly favorable. The attacks on Trump have netted a boatload of unforeseen benefits, the major one being the exposure of the tactics of the Democrats to a watching world. They are being seen as vile, liars, and hypocrites. Of course, they’ve always been this way, but the media have covered their sins with journalistic partisanship. The media want the Democrats to be in charge. Most of it has to do with abortion. Liberals want their secular religion established as America’s religion and abortion as their blood sacrifice.

Hillary was supposed to have won. This would have kept the lid closed on Pandora’s Box. The impeachment trial has backfired on the Democrats. The media cannot contain the damage. There are too many media outlets to control.

In addition, this impeachment fiasco has made fighters out of some of the Republicans. This was really unexpected. Republicans are standing up to the Democrats. Even Mitch McConnell. The Democrats are nonplussed with this turn of events. Essentially, the GOP has told Chuck Schumer to shove it for his demands for certain witnesses for a possible Senate trial.

Consider this: “U.S. Rep. Adam Schiff, the chairman of the House Intelligence Committee and leader of the push to impeach President Donald Trump was fiercely booed and shouted down in his home state of California on Saturday.”

This can’t be proved, but it looks like Trump is inspiring political leaders and the people in other countries. Great Britain’s latest election may be proof of the Trump Effect.

My fear is that many people will think we’ve won — not by a longshot. Liberals never quit. They are relentless. There’s a great deal of work to do. Washington’s swamp may take decades to drain. Let’s not do what conservatives did when Reagan won big in 1980 and 1984. They declared victory and took a nap thinking all was right with the world.

The Swamp Creatures were just below the surface waiting for the opportunity to strike again. And they did. We got two establishment Republicans named Bush.

Quid Pro Quo. Who knew that a Latin phrase would emerge as a political debate in an impeachment hearing? It wasn’t long before the Demo-cretens scrapped the Latin phrase and went for a good ol’ English (actually French) word — bribery. The Democrats did not intend to reveal that politics has always been about quid pro quo, a phrase that means, “a favor or advantage granted or expected in return for something.”

Take your pick. Politics is all about quid pro quo. You can’t get elected without promising voters something for their vote using other people’s money. “If you vote for me, I’ll ensure that college and medical care will be free.” That’s quid pro quo. It’s legal but immoral and unconstitutional.

What the Demo-cretans didn’t count on is that Trump made it clear that he was not interested in quid pro quo except to clean up the corruption. 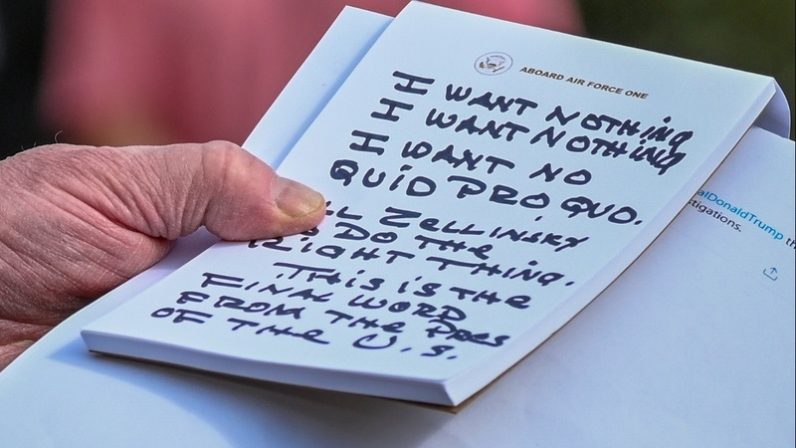 Foreign aid is our money! We have a right to expect something for it, especially if it reveals corruption in the country that’s receiving it since corruption means that the politicians get the money. John Nolte writes: “If Trump had demanded a ‘quid pro quo,’ he would have been doing his job. As it is, there is no evidence of a ‘quid pro quo’ — certainly not from Gordon Sondland.”

The unintended consequences are that many people are beginning to question foreign aid. Why should their money be sent to foreign countries? It’s madness!

One last thing. The Democrats and RINOs have never encountered or practiced pushback. The RINOs always seemed to give in to the Dem0-cretens. George W. Bush almost never pushed back. It was thought to be beneath the office of the presidency to fight back. Trump is a fighter. Chuck Schumer is flummoxed by it. The media don’t know how to handle it. They are nonplussed to understand how they have not been able to bring down Trump.

The major unintended consequences of the 2016 election are that nearly everyone believed Hillary Clinton would win and they could breathe a sigh of relief that the swamp would still stink.