The ‘Slave Bible’ and Its Rotten Fruit

Propagandizing, media bias, and selective fact-finding to manipulate people have a long history. It’s all much more sophisticated today. Keeping people in the dark about the issues of the day is a practice used by both sides of any debate. Socialism is all the rage, and yet rarely do we find today’s media outlets examining the true impact on socialist policies. The same is true of communism, abortion, Islam, and same-sex sexuality

The Bible has something to say about this:

The first to plead his case seems right,
Until his neighbor comes and examines him (Prov. 18:17).

But what if the neighbor is given a rigged book? What if certain facts have been hidden from him?

Charles Babbage (1791–1871), an English scientist and mathematician who conceptualized the idea of a programmable computer, understood that scientists were often guilty of manipulating evidence to add credibility to a theory. Babbage described three types of misconduct: forging (the outright invention of data), trimming (the cosmetic ‘massaging’ of data, so as to display them to best advantage), and cooking (discreetly losing the data that were out of line or did not help the hypothesis).1

For years many critics of the Bible have claimed that the Bible supports slavery as it was practiced in the United States and the Caribbean. If this is true, then why was a special “trimmed” Bible created for slaves?

According to NPR, Parts of the Holy Bible, Selected For the Use of the Negro Slaves, in the British West-India Islands, is on display at the Museum of the Bible in Washington, D.C., and is one of only three known copies of this abridged version of the King James Bible. Printed by the Missionary Society For the Conversion of Negro Slaves, the text of the Bible was used by missionaries from England to convert slaves to Christianity.

The edited version left out anything “that might lead slaves to turn on their masters. For instance, Moses doesn’t even exist until he is an old man in the ‘Slave Bible.’” Sadly, many pastors preach from a Bible that has all its pages but refuse to teach from parts of it.

Everything from Genesis 45 to Exodus 19 was cut out. Anthony Schmidt, the associate curator of Bible and Religion in America at the museum, explained, “What they’ve cut out is the story of the Israelites captivity in Egypt and their eventual liberation and journey to the promised land.”

The censored version removed 90 percent of the Old Testament and 50 percent of the New Testament, eliminating potentially seditious passages such as Exodus 21:16, which reads: “And he that stealeth a man, and selleth him, or if he be found in his hand, he shall surely be put to death.” 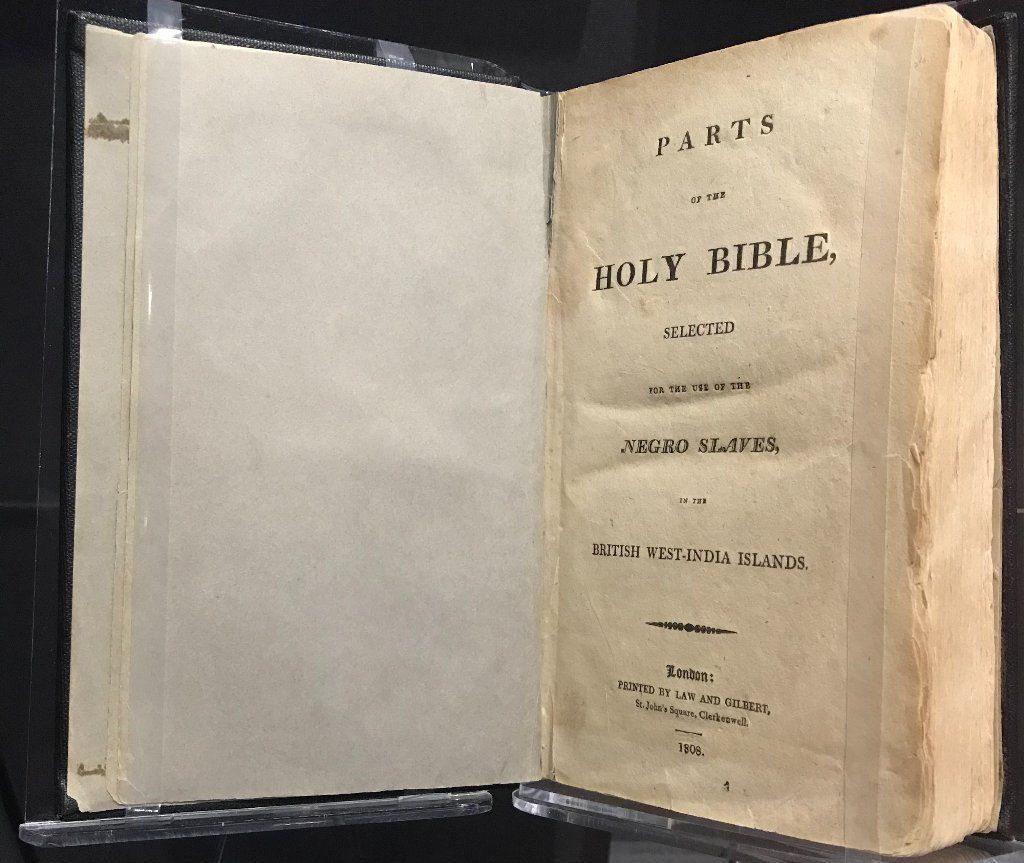 On display at Museum of the Bible in Washington, D.C., is a special exhibit centered on a rare Bible from the 1800s that was used by British missionaries to convert and educate slaves.

The slave owner of Frederick Douglas understood the power of an untrimmed Bible. “If he learns to read the Bible it will make him ever unfit to be a slave,” he said of Douglas. In no time “he’ll be running away with himself.” Douglas came to understand what his master understood — “that there was power, indeed subversive, revolutionary power, in reading and interpreting the Bible for oneself, and that the institution of slavery in fact depended on controlling biblical literacy — who can read the Bible when and how.”

Exodus 21:16 is a key anti-chattel slavery passage. Many of this nation’s earliest settlers paid for their passage as indentured servants. Indentured servitude is neither unbiblical nor unconstitutional. A thief who was unable to make restitution for a property crime could be sold into servitude for his theft (Ex. 22:3b). Even after the abolition of slavery, indentured servitude was retained by the Constitution as a legitimate form of punishment: “Neither slavery nor involuntary servitude, except as a punishment for crime whereof the party shall have been duly convicted, shall exist within the United States, or any place subject to their jurisdiction” (Amendment XIII, Section 1). We should, therefore, distinguish between slave (man-stealing) and bondservant (indentured servant). We should also keep in mind that the word “slave” appears only once in the King James Bible (Jer. 2:14a), as does the word “slaves” (Rev. 18:13). The word slavery does not appear anywhere in the King James Bible.2

On sale at American Vision.

Robert L. Dabney, the most articulate defender of Virginia and the South, commented:

It need hardly be said that we abhor the injustice, cruelty, and guilt of the African slave trade. It is justly condemned by the public law of Christendom…. It is condemned by the law of God. Moses placed this among the judicial statutes of the Jews: “And he that stealeth a man and selleth him, or if he be found in his hand, he shall surely be put to death.”3

There is no indication that Exodus 21:16 only has Israelites in mind, as some argue. If it does, then verse 12 would also only apply to Israelites since its language is identical to what we find in verse 16:

James B. Jordan offers a good summary of the issues involved: “The Bible punishes all man-stealing with a mandatory death penalty. In Deuteronomy 24:7, the kidnapping of covenant members is particularly forbidden, but in Exodus 21:16, all man-stealing is prohibited. It might be maintained that if we read v. 16 in context of v. 2, it is only Hebrews who are protected and avenged by this law. The text simply says ‘man,’ however, and there is no indication in the immediate context (vv. 12, 14) that ‘man’ is restricted to covenant members.”4

We know that in the New Testament Paul condemns slave traders (kidnappers) in 1 Timothy 1:10:

But we know that the Law is good, if one uses it lawfully, realizing the fact that law is not made for a righteous person, but for those who are lawless and rebellious, for the ungodly and sinners, for the unholy and profane, for those who kill their fathers or mothers, for murderers and immoral men and homosexuals and kidnappers and liars and perjurers, and whatever else is contrary to sound teaching.

The book of Revelation considers those who traffic in “slaves and human lives” to be immoral and destined for judgment (18:13). Nowhere does the New Testament support trafficking in slaves. Paul’s letter to Philemon does not support the notion that the New Testament tolerated chattel slavery. Onesimus was probably a bondservant who owed a debt to Philemon. Paul encourages the runaway Onesimus to return to Philemon and encourages Philemon to release Onesimus upon his arrival. Paul promises to pay Philemon if Onesimus “owes you anything” (Phil. 18). Paul’s mention of a debt seems to indicate that Onesimus was an indentured servant.5

Recently I addressed the Texas legislature. . . . I told them that the only answer to the crime problem is to take nonviolent criminals out of our prisons and make them pay back their victims with restitution. This is how we can solve the prison crowding problem.

The amazing thing was that afterwards they [the legislators] came up to me one after another and said things like, “That’s a tremendous idea. Why hasn’t anyone thought of that?” I had the privilege of saying to them, “Read Exodus 22. It is only what God said to Moses on Mount Sinai thousands of years ago.”6

The history of the enslavement of African blacks has been an impediment to the gospel. Gary North writes: “Slavery as a system came to North America in the early eighteenth century, and it was grounded in the racist prejudices that increased with every shipload of victimized blacks. Racism seems to have been the foundation of slavery rather than the reverse.”7 With the coming of Christ Christians are to preach the gospel to make disciples of the nations; making them “slaves to Christ,” not slaves to other men.

Why the US is Falling Behind in Science, Technology, Engineering, and Mathematics

The ‘Slave Bible’ and Its Rotten Fruit