On Sunday, players of the St. Louis Rams raised their arms in tribute to the events in Ferguson, Mo., as they walked onto the field during introductions before the team’s game against the Oakland Raiders.

It reminded me of the awards ceremony for the 200 meters at the 1968 Mexico City Olympics when gold medalist Tommie Smith and bronze medalist John Carlos stepped on the podium shoeless, heads bowed, with a clenched fist with black gloves on raised to get their Olympic medals. 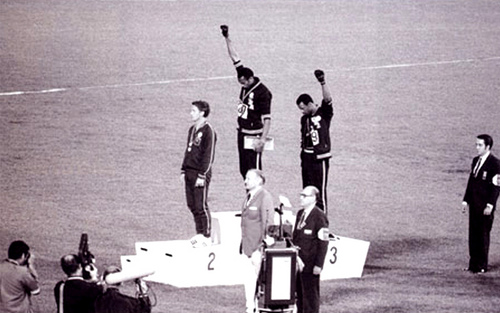 There are at least three problems with the NFL hands raised gesture. First, there is no evidence that Michael Brown had his hands raised in a “don’t shoot” signal. There has not been any substantive evidence that Brown was surrendering with his hands up. All the evidence seems to point that he was on the attack.

Second, NFL players who want to identify with the victims of violence should start with the NFL. You may have seen the commercials where NFL players speak out against domestic violence. Let’s not forget New England Patriots tight end Aaron Hernandez who is currently being held without bail following his indictment on three murder charges.

Rush Limbaugh is right when he says that the players should be addressing their scorn to some of their own. This is not to say that there is not domestic violence in the broader culture. There is. In fact, it’s actually higher. But it’s the high profile nature of professional athletes that makes any such incident a problem.

What type of signal did these NFL players send to young blacks of America?

Third, “recent surveys have shown that the NFL is approximately 57–61% non-white, including African Americans, Polynesians, and non-white Hispanics, Asians, and people of mixed race.”

Why don’t NFL players go into places like Ferguson and work with the youth there, not just to hand out jerseys and shoes, but to encourage them, set up educational centers, and teach them job skills?

The NFL is made up of a disproportionate number of Polynesian players. “An anomalously high 1.7% of NFL players are American Samoans. Many of these players go to American Samoa to work with the youth of the very small island. The following is from 60 Minutes sports. The thing that caught my attention was the hard work and discipline aspect of the Samoan culture that becomes part of the character of the young men:

NFL players could also become a liaison between the black community and the police department instead of poking the department in the eye before tens of millions of television viewers.

Muslim Says Islam Discovered the Earth Was Round

Leftists Calling for Communism in the Name of Evolution