“So Help Me All Powerful State”

The article below by Dr. Jerry Newcombe that you are about to read describes how the Democrats are no longer going to use “So help me God” in their oaths.

Many Democrats and secularist don’t want “In God We Trust” to be our nation’s motto. A more accurate statement would be “In Government We Trust” or “In the State We Trust.” Government is the new god for millions of Americans.

Whenever there’s a problem, the first thing we hear from politicians is that we need more money to feed the beast. It’s an affront to God to associate our debased currency, taxing system, and immoral laws with Him. But I digress.

The Rev. Gerard LaCerra, chancellor of the Archdiocese of Miami, understands the implications of an action that removes “so help me God” from the oath of office: “What are we supposed to base our commitments on if something like this is removed? The State?” In time, pluralism leads to the establishment of the State and its own brand of theocratic civil religion.

The ACLU sued a North Carolina judge because he started each court session with prayer, a brief plea to God for justice. These are the “offending” words:

O Lord, our God, our Father in Heaven, we pray this morning that you will place your divine guiding hand on this courtroom and that with your mighty outstretched arm you will protect the innocent, give justice to those who have been harmed, and mercy to us all. Let truth be heard and wisdom be reflected in the light of your presence here with us today. Amen.

A United States District Judge ruled that the judge’s “prayer in the courtroom is contrary to the law of the land.” Based on historical evidence, this would be impossible to prove. There is
nothing unconstitutional about uttering a prayer by a judge in a courtroom. The Bible is still used in many courts to swear in witnesses, with the witnesses acknowledging with “So help me God.”
Congressional chaplains are constitutional: “The legislature by majority vote invites a clergyman to give a prayer; neither the inviting nor the giving nor the hearing of the prayer is making a
law. On this basis alone . . . the saying of prayers, per se, in the legislative halls at the opening session is not prohibited by the First and Fourteenth Amendments.”

If there is no God, there is no law. How can a judge render a just decision if there is no fixed standard of justice? Why should a witness tell the truth? Under the Federal Judiciary Act of 1789, no witness could testify who “did not believe that there is a God who rewards truth and avenges falsehood.” This requirement was not changed until 1906. The consensus of
the time held that an atheist could not be trusted as a witness:

“The Court of Common Pleas of Chester County (New York) . . . rejected a witness who declared his disbelief in the existence of God. The presiding judge remarked, that he had not before been aware that there was a man living who did not believe in the existence of God; that this belief constituted the sanction of all testimony in a court of justice; and that he knew of no cause in a Christian country where a witness had been permitted to testify without such belief.”

The following are some examples of how our Founders understood the significance of oaths to God: 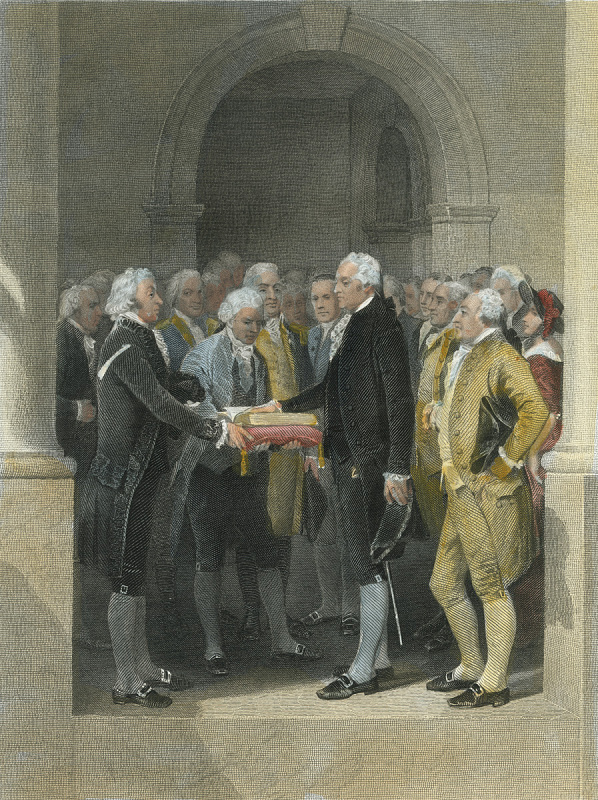 George Washington taking the oath of office on the Bible

Noah Webster’s 1828 Dictionary of the English Language gives the following definition of “oath”:

The following is from Dr. Jerry Newcombe

The attempt to remake our country into a secular wasteland continues unabated.

Even the U.S. House of Representatives has begun leaving God out when swearing in witnesses.

For example, a video of such an omission is beginning to make the rounds.

Graham Ledger, the host of “The Daily Ledger” on One America News Network, showed the video of this purposeful omission of God at a swearing in; and he commented: “So God is gone now. Poof. No more God in the people’s House. This is not about a religious test. This is about the founding of this republic. We are a country built on a core belief in God and Judeo-Christian values. Thus, the Declaration of Independence is now under de facto assault by this crew. One nation under God, divisible by one political party that seeks to attack liberty and justice for all.”

In the video, we see Democratic Congressman Steve Cohen from Tennessee, who is the chairman of this particular committee, swearing in guests. Cohen is perhaps best remembered as the congressman eating KFC on the Congressional floor in a publicity stunt recently.

Cohen asks some witnesses about to testify: “Do you swear or affirm under penalty of perjury that the testimony you’re about to give is true and correct, to the best of your knowledge, information, and belief?”

Congressman Michael Johnson (R, LA) politely interrupts with a “parliamentary inquiry.” He states: “I think we left out the phrase ‘so help me, God.’”

Cohen replies directly to Johnson, “We did.” Johnson asked if the witnesses could swear in again, but this time with the traditional phrase, “So help me God,” added. Chairman Cohen shakes his head and says, “No.” And he adds, “If they want to do it…but some of them don’t want to do it.”

Johnson states, “Well, it goes back to our founding history. It’s been part of our tradition for more than two centuries, and I don’t know that we should abandon it now.” Cohen looks at Johnson, and his face seems to communicate, “What planet is this guy from?”

Johnson adds, “Could I ask the witnesses if they would choose to use the phrase?” Then Congressman Jerome Nadler (D-NY), shuts this discussion down, saying, “We do not have religious tests for office or for anything else, and we should let it go at that.”

I once interviewed Michael Johnson for Christian television. As an attorney, he specialized in religious liberty. He told me, “Can the government acknowledge the role of God in human affairs? Now we know that the founders have always done that since the beginning—the founding of the nation.” So the answer is yes. Johnson also added, “Americans intuitively have an appreciation for absolute truth and justice.  We were programmed that way by our Creator, and that’s what the founders acknowledged from the very beginning….The enemies of the faith would have us remove all vestiges of Christianity, all vestiges of the God of the Bible from the public square; and that’s not what the Constitution says, and that’s not what we’re required to do.”

Another Republican Congressperson weighs in on this issue. Liz Cheney from Wyoming says: “It is incredible, but not surprising, that the Democrats would try to remove God from committee proceedings in one of their first acts in the majority….They really have become the party of Karl Marx.”

When my brother-in-law saw this clip, he responded: “If you think about it, our rights are inalienable because they are endowed by our Creator. If we no longer believe in a Creator, how soon will our rights no longer be inalienable?” Exactly. That is what at stake in this debate on a seemingly arcane subject.

The founders followed the classic tradition of swearing in on the Holy Bible and in the name of God. Why are oaths taken that way? Because they recognized that we are accountable to God who sees all and who will one day judge us all.

I remember in seminary, one of my professors said, “It’s not what we (professors) expect that matters. It’s what we inspect.” Inspection means accountability. It means we have to do the assignments, which they will then inspect.

In his Farewell Address, George Washington said, “Let it simply be asked: Where is the security for property, for reputation, for life, if the sense of religious obligation desert the oaths which are the instruments of investigation in courts of justice?” Take God out of oaths, and they have no real meaning.

Thomas Jefferson asked, “Can the liberties of a nation be secure when we have removed a conviction that these liberties are the gift of God?”

Acknowledgment of God is another victim, it would seem, of today’s culture war. And with Him goes any assurance that the witness is telling the truth.

“So Help Me All Powerful State”