Senators Chris Dodd and Ted Kennedy and the “Waitress Sandwhich”

The Supreme Court was never meant to be the final arbiter of right and wrong. Our founders never set up the non-elected members of a Supreme Court to make law.

The founders would never have thought of giving so much power to five unelected people after dividing the power of the Federal government among three branches (and dividing one of those branches into two) and then give seemingly unlimited power to one branch for life.

What the Democrats can’t get passed into law through the legislative or amendment process, they have turned to the Supreme Court. The nomination of Brett Kavanaugh is a threat to their goal of controlling the court. Before Christine Blasey Ford accused Judge Kavanaugh of sexual assault 36 years ago, the Democrats had already opposed him. “On July 10, less than 24 hours after President Donald Trump announced Kavanaugh’s nomination, [Democrat Sen. Bernie] Sanders publicly remarked, ‘[w]e must mobilize the American people to defeat’ Kavanaugh.” (The Blaze)

Look at this letter from Sen. Chuck Grassley in response to a request from Sanders for additional investigations into Kavanaugh: 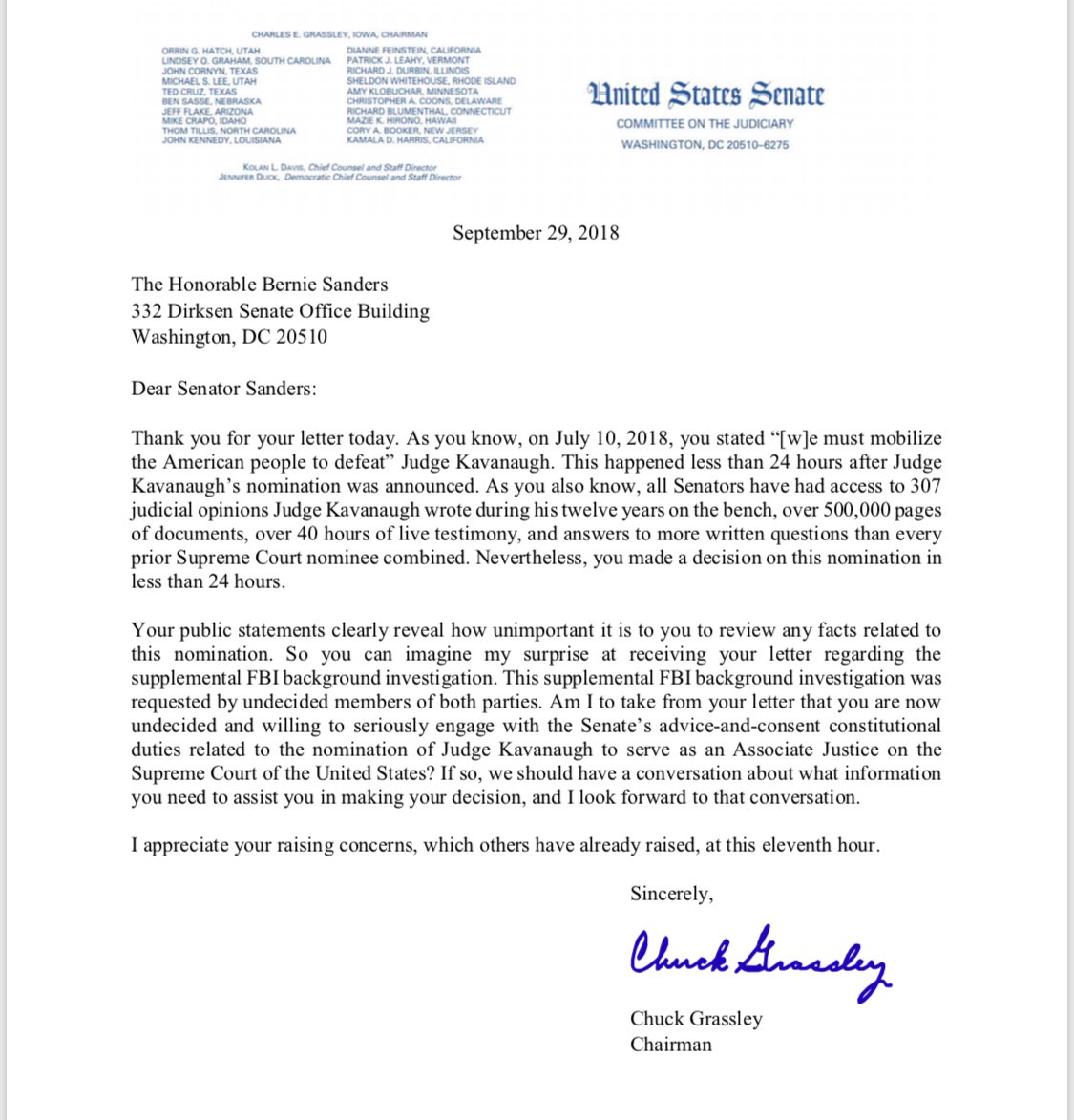 Even if the FBI concludes that Ford’s accusations cannot be substantiated, the Democrats will still oppose his nomination because he is in most cases an advocate of limited government.

The Democrats called for an FBI investigation, but now they are criticizing the investigation. Even though Judge Kavanaugh has endured six FBI investigations, they want a broadened scope investigation that no Supreme Court nominee has ever been subjected to and no sitting Senator would likely pass. Their goal is to intimidate any potential nominee except one of their nominees from wanting a seat on the Supreme Court.

The Democrats don’t have a problem with sexual assault as long it’s one of their guys.

Consider the sexual assault issues in the Democrat Party – from Edward Kennedy (the Lion of the Senate) and Chris Dodd to Bill Clinton and Keith Ellison:

When the meal was coming to an end, the two women accompanying the senators repaired to the ladies’ room. A waitress, Carla Gaviglio, was summoned to the private dining room by two members of the world’s most deliberative body.

In a lightning strike, Kennedy allegedly picked up Gaviglio and threw her on the table, knocking plates and other items to the floor. He reportedly lifted her up again and put her on top of Dodd, who was seated in a chair. Kennedy then engaged in an attack that continued until another employee entered the room and joined Gaviglio in screaming, causing others to enter the room.

Oh, those high-spirited U.S. senators. They had gone out on the town in our nation’s capital and created a new dish, the waitress sandwich. Why does anyone wonder why the victims of such attacks remain silent for so long? The power is all on one side. Few were inclined 30 years ago to call what happened that night an assault. Certainly no one was going to be punished. Instead, it was given a name to turn it into a joke.

Kennedy and Dodd would each be elected to four more terms in the Senate. They would be hailed as champions of liberal causes. Kennedy’s informal title became Lion of the Senate. After Kennedy’s 2009 death, the taxpayers were put on the hook for $32 million (inserted into a defense funding bill) to help fund the Edward M. Kennedy Institute for the U.S. Senate in Boston. There’s a replica of the U.S. Senate chamber, but none of that private La Brasserie dining room. (Hartford Courant)

Outrage is a one-way street when it comes to claims of sexual assault when politics, power, and money are on the line. In 2017, “U.S. Rep. Jackie Speier, D-Calif., told NBC’s Chuck Todd that the House of Representatives has paid about $15 million in secret sexual harassment settlements in the last 10 to 15 years.” This was a big story that went nowhere.

Don’t misunderstand me. The Republicans are almost equally power and money hungry. The difference is they don’t know how to play hardball. The Democrats do. Maybe what’s happened to Brett Kavanaugh is a GOP wakeup call. But don’t count on it since the Democrats have many more years of practice and hypocrisy under their belt.

The Ten Commandments: Foundation of Liberty

It's Time to Investigate All the Senators on the Judiciary Committee

Senators Chris Dodd and Ted Kennedy and the “Waitress Sandwhich”