I’m sure glad I’m not famous enough to have my life scrutinized going back 40 years. Who knows what someone might say about me. Yikes. How does a person defend himself against accusations made by someone out of the distant past? We live in perilous times where an accusation can destroy a person’s career, reputation, and life. I’ve seen it happen many times. Tragic.

It was not that long ago that Supreme Court Justice Clarence Thomas was accused of sexual innuendos and misconduct. You may remember Herman Cain who ran for president in 2012. Two women came forward accusing him of sexual misconduct. As the story unfolded, it began to unravel. It was hard to find anything on Mitt Romney, but that didn’t stop his accusers from making sexual hay out of “binders full of women.”

A fake dossier was manufactured for “opposition research” against Trump by Democrats and some Republicans. Now we learn that Hillary is looking to manufacture a second sexual dossier against Trump. Sex – good and bad – sells. The following is from Rush Limbaugh:

The Roy Moore sexual misconduct story is the latest entry into no-holds-barred politics. Who’s telling the truth? I don’t know. The only people who know are Roy Moore and his accusers. John McCain and Mitch McConnell and other Republicans are calling on Moore to step down from the Alabama Senate race. Guilty until proven innocent.

The woman who is making the most serious accusation may have credibility issues. But I don’t know if what the article is reporting is true about her. Maybe she was rebuffed by Moore when she made sexual advances toward him and flipped the story out of spite. There are numbers of possible scenarios. “Joanie Faircloth, who alleged that Bright Eyes frontman Conor Oberst had sexually assaulted her,” stated that the accusation was “100 percent false. . . . I made up those lies about him to get attention while I was going through a difficult period in my life and trying to cope with my son’s illness.” (Rolling Stone)

There are reports that some of the women accusers are supporting the Democrat candidate. One of them has worked for Joe Biden (who has his own creepy harassment issues). She posted a picture of her and Biden on her Facebook page. It has since been taken down. 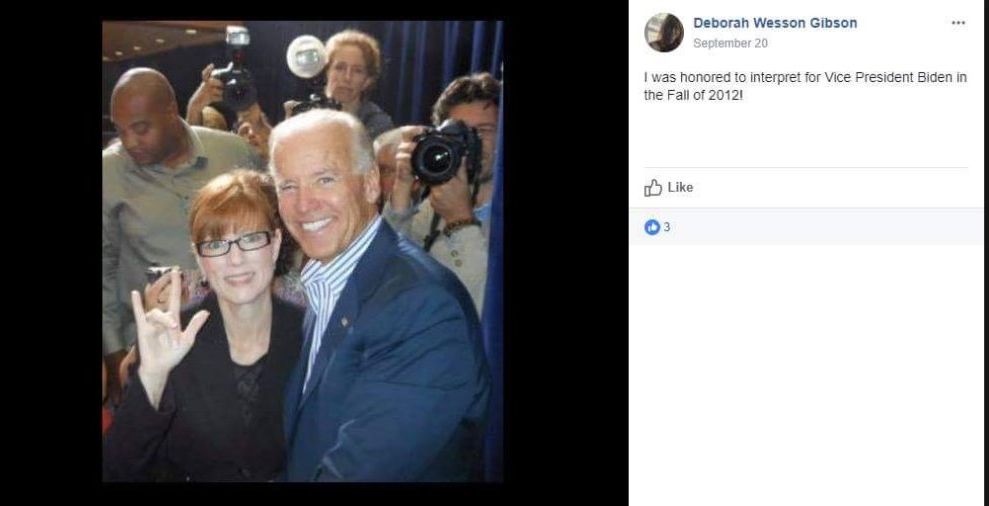 In one posting that is still on her page, Gibson urged the removal of Trump from office, writing, “Get Trump OUT before we all get nuked!”

“How fast can we be rid of Trump?” she asks. “Seriously, time is of the essence. This is not a playground exchange….” (Breitbart)

This doesn’t mean that what Moore’s accusers are saying is false, but it does lead one to be careful about making a determination about guilt or innocence based on their possible prejudiced testimony. One of Moore’s accusers says that he sat with her in a pizza restaurant where they had wine:

Moore told [Sean] Hannity that he did not buy wine for the 18-year-old Deason, then under the legal drinking [age] of 19, “because (Etowah) County was a dry county.” (AL.com News)

The thing of it is, there are enough fake sexual misconduct stories that make people like me suspicious. As a result, the true stories often get mixed in with the fake. Who is hurt the most? True victims. We’ve seen similar fake “hate crime” stories. A black Air Force Academy Preparatory School cadet was found to be responsible for racial graffiti. Sources told the Colorado Springs Gazette  “that the cadet candidate committed the hoax ‘in a bizarre bid to get out of trouble he faced at the school for other misconduct.’” (The Root) Who was initially blamed? The non-black cadets.

Candlelight vigils, protests, and more than 1,080 campus security hours were spent over the past year in Ypsilanti on racial slurs at Eastern Michigan University. The former student who was arrested and charged, however, is 29-year-old Eddie Curlin — a [black] minority. (Washington Times)

I recall a 2012 story where two lesbians claimed to be victims of a hate crime “when hateful messages were scrawled on their Colorado home.” In fact, they perpetrated the hoax. (Fox News)

Here are some of the most egregious examples. Rolling Stone magazine reported on an alleged “brutal gang rape of a woman named Jackie during a party at a University of Virginia fraternity house.”

Included in the story was that the University failed “to respond to this alleged assault – and the school’s troubling history of indifference to many other instances of alleged sexual assaults. The story generated worldwide headlines and much soul-searching at UVA. University president Teresa Sullivan promised a full investigation and also to examine the way the school investigates sexual assault allegations.”

After an investigation, it was learned that “there now appear to be discrepancies in Jackie’s account. The fraternity has issued a formal statement denying the assault and asserting that there was no ‘date function or formal event’ on the night in question.”

Then there’s Lena Dunham’s rape story where she claims she was raped by a “Republican” named “Barry.” Dunham, who stars in a TV series called Girls, a show I’ve never seen,” details the alleged rape charge in her book Not That Kind of Girl.

Lena Dunham has finally responded to claims she made up a story about being raped by an acquaintance in college, detailed in a passage from her new book Not That Kind of Girl, and she’s sticking by her story.

[She] wrote an essay on Buzzfeed to address reports claiming to have identified a man named ‘Barry’ who matched the descriptions of the man who raped her after a party when she was attending Oberlin College nearly a decade ago.

The man interviewed by Breitbart and the National Review denied the claims, saying he never even met Dunham during their time at the Ohio liberal arts college. (Daily Mail)

Random House, the publisher of Not That Kind of Girl, issued an edited and corrected edition of Dunham’s book.

Let’s not forget the 2006 Duke Lacrosse rape charges that proved to be false as well as those made by Tawana Brawley and promoted by Al Sharpton in 1987. In the Brawley case, “The New York prosecutor whom Brawley had accused as one of her alleged assailants successfully sued Brawley and her three advisers for defamation.”

Sharpton was rewarded with a TV program and an open door to the Obama White House. Go figure.

High school football star Brian Banks, “who was once one of the most highly-sought [football] players in the country had a rape charge against him dismissed after his accuser admitted it had never happened.” She received $1.5 million from the school where she falsely claimed Banks had raped her.

Banks, who was 26 at the time of his release, spent six years in a California prison. He “collapsed in sobs during a court hearing as a prosecutor quickly conceded the decade-old case and moved for a dismissal.”

“A Michigan college student was charged [this year] after she falsely reported to campus police that she was attacked and raped. Mary Zolkowski, 21, faces felony charges after she told authorities contradictory stories about a rape at Delta College in University Center, according to Michigan Live.” (New York Post)

A British woman who falsely accused 15 men of raping her was sentenced to ten years in prison this year. (New York Post)

The media attention given to the false rape stories often result in people, police, and prosecutors becoming desensitized and suspicious of women who make a true rape charge. It’s the true victims of rape and other forms of sexual assault who suffer and are reluctant to come forward.

There are examples in literature, for example, To Kill a Mockingbird and A Passage to India. Let’s not forget the story of Potiphar’s wife who falsely accused Joseph of assault (Gen. 39:7-20).

Don’t forget, people lie. There’s even a commandment about it: “You shall not bear false witness against your neighbor” (Ex. 20:16).

There is a long history of the empowered trying to ruin the reputations of their critics, from Ahab and Jezebel who gathered false witnesses to indict the vineyard owner Naboth to steal his land (1 Kings 21:9-13) to the false witnesses against Jesus at one of His late-night secret trials (Matt. 26:59-62).  Then there’s the story of Joseph and Potiphar’s wife (Gen. 39).

The following Bible verse comes to mind in situations like this:

Millennial Claims Trump is the Reason for Recent Violence

Is the Income Tax Immoral?