The elephant in the room is the public school system. It’s filling our nation with cultural toxicity. Public schools have added same-sex sexuality and transgenderism into the curriculum. Some will say, “but not in our schools.” California is the biggest consumer of textbooks. When textbook manufacturers are told to include these topics in future editions of their textbooks, they will comply. Other states will have to purchase these textbooks out of necessity.

It’s long past time to make a clean break from this idol. For decades Christians have been trying to save the public schools. It isn’t working.

While Christians try to “save” their beloved public schools, another generation of young people is seduced by the anti-Christian worldview of public education. This view is not popular with the majority of Christians. Criticizing public education in America is akin to blaspheming all that is holy and good.

Some Christians want to have the Bible taught in Public Schools hoping this will fix a lot that’s wrong with them. Here’s my opinion on that in a short video:

In order to justify the continued support of public education, the following reasons are often given.

Young people need to know about the Bible to “understand the English language, English literature, history, art, music or culture.”

There is truth to this. “For example, there are over 1,200 documented references to the Bible in Shakespeare’s 36 plays. If you don’t know the Bible, you really can’t understand Shakespeare. You can’t get past the first sentence of Herman Melville’s Moby Dick — ‘Call me Ishmael’ — if you don’t understand who Ishmael was in the Bible. Of the allusions that a student needs to know for Advanced Placement in English Composition and Literature, approximately two-thirds are Biblical allusions, according to AP Literature and Composition. If you don’t know the Bible, you won’t do well on this part of the Advanced Placement test.” (Fox News)

As many of you already know, public schools are getting pressure to get away from teaching a Eurocentric-based curriculum. It’s good to teach the impact the Bible has had on our world, but do we really want this done by people who detest the Bible?

Will the Koran be next to teach in public schools? 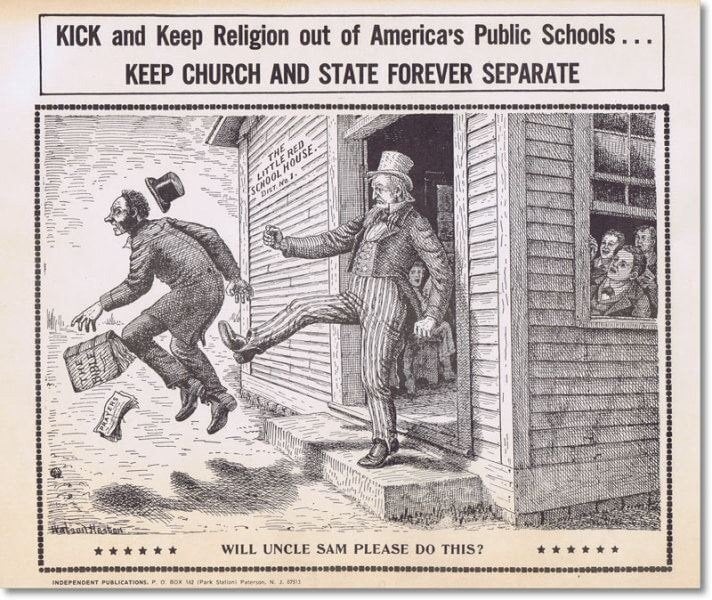 We can’t afford to send our children to private schools.

If Christians pulled their children out of public schools, voted down every tax increase having anything to do with education, voted to repeal the education portion of the property tax, and voted for candidates who would cut every dollar from education funding, then most families could afford the costs involved. The money spent on trying to save the public schools would go a long way in establishing scholarship funds for children whose parents cannot afford a private-school education. Yes, it may even take some sacrificing on the part of parents. Of course, home-schooling is always an option. Children can help out by working. When your children get older, have them work to share the financial load.

It’s not the church’s job to educate.

I heard this one recently. Christian school critics balk at turning over the church’s facilities for educational purposes because the tithe is designed to support the church’s work, not the education of children. That’s why we pay taxes. So the church building is vacant six days a week while Christians complain that it’s too expensive to start a Christian school. The Sunday school classrooms are used for forty-five minutes a week! What a waste of God’s money. So we send our children to public schools where they are indoctrinated for thirty hours a week in the latest non-Christian propaganda. To combat secularized education, Christian school critics develop “youth programs” for Wednesday and Sunday evenings and lament the fact that parents don’t take advantage of them. These kids are getting at most two hours of weekly instruction, while a child in a Christian school receives thirty hours of training from a biblical perspective. There’s no comparison. Most of these “youth programs” are weak entertainment times with a “devotional” to give them legitimacy. There are exceptions, but not many.

My child is a witness for Christ in public schools.

He or she may be. But I wonder how much witnessing really takes place in public schools. Most of the time children are sitting behind desks listening to a teacher lecture. From the time I entered public school no one ever presented the gospel to me. It’s the friendships that are developed after school that lead to witnessing opportunities: the neighborhood, playground, ball field. Witnessing can take place anywhere. Jesus met people at work and in their homes. He even went into the temple. If you want to follow Jesus’ example, then go witness to Jews in their local temples.

While there are few opportunities to witness in the public schools, students are captive to an anti-Christian worldview for at least six hours every day. This says nothing of the worldview promoted by a child’s peers from pagan homes.

Our school is different.

Maybe in degree. My guess is that most parents have no idea what’s going on in their child’s school. If they don’t hear any bad news, they assume that all is well. Keep in mind that public school children are not comparing their education with the public school education that was prominent forty years ago. And it wasn’t that great back then. The education students are receiving right now is normal for them. It’s the only standard they know, and it’s not a very good one. Anyway, a school that does not teach from a Christian perspective is at best third-rate.

I want my child to be exposed to the ‘real’ world.

What is the “real world”? The real world is where Christ dwells and where His Word is taught. Christianity is not unreal. If it is, then why not worship with pagans since their domain is the “real world.” Remember, Adam and Eve “fell” from what was normal, that is, from a world where they were in intimate fellowship with their Creator. A world without Christ is an insane and irrational world. A Christian school is a place of re-creation, a redemptive attempt to get back to the original design. Schools that Christians establish should act as magnets for unbelievers to be brought back to the garden. Christians should be setting the agenda for what’s real, honest, and good so as to be a light for those who are in darkness.

I believe God has been giving us a very clear message through the modern-day equivalent of Balaam’s donkey: the court system. Balaam was called on by Balak to prophesy against Israel. God had warned Balaam to stay away from Moab. Balaam refused. The Angel of the LORD met Balaam on the road as he was going down to meet Balak, the king of Moab. Balaam’s donkey refused to confront the Angel of the LORD. Balaam struck his donkey three times to force him ahead. Finally, Balaam realized that it was the LORD who was directing him to turn around.

Repeatedly the courts have ruled against Christians and their attempts to bring Christianity back to the classroom. Like Balaam, they refuse to heed the message that God is giving through the Court. God is telling parents to seek a different route.

Prayers at sporting events and around flag poles do not constitute a Christian education. The entire curriculum must be Christ-centered. Saying a prayer at the beginning of the school day does not sanctify the secularization of education that takes place for the next six hours. The prayer ritual only gives unjustified validity to what is inherently corrupt.

What You Don't Know About the Minimum Wage Will Hurt You