Liberals not only try to control the narrative, they also try their hardest to keep truth from getting out to low-information voters.

For years abortionists have tried to keep full disclosure from women considering abortion. Liberals want every ingredient listed on every food package but woe to anyone who wants women to see what they’re aborting.

So it’s not surprising that pro-abortionist Sady Doyle “criticized a Newsweek December cover in a piece titled ‘Why Does Newsweek’s “Abortion Wars” Cover Show a Cartoon Fetus Instead of a Woman?’” Doyle commended the magazine for tackling abortion in its new cover story – but bashed the cover illustration for showing a fetus that looked ‘more like a baby’ than an ‘actual pregnancy.’” (H/T: Newsbusters) 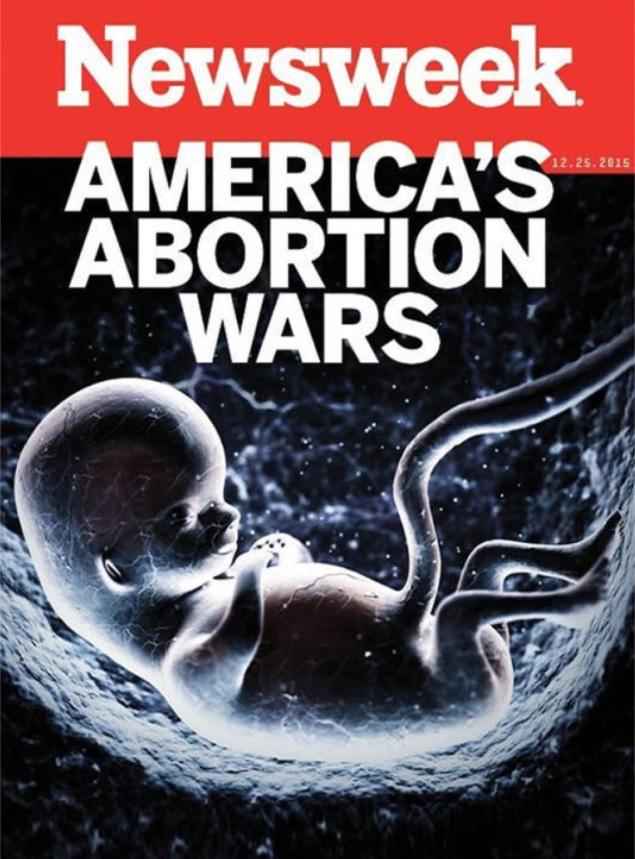 For people who believe it’s OK to kill unborn babies, it’s only size that matters. Here’s a thought exercise for Sady Doyle. Should women be permitted by law to kill their child as soon as he or she is born? A baby certainly looks like a baby, so I’m guessing she and most supporters of abortion would say no. How about if the baby is just about to be delivered? Most (but not all) people would say no. But following Doyle’s baby criteria that if it looks like a baby it’s a baby, Doyle would have to say no; it would be wrong to kill an unborn baby at that point.

How about one hour before birth? Two hours? Ten hours? Once she and other abortionists pick the time that a “fetus” transitions from a “real baby” through nine weeks of development back to conception when it’s a non-baby, that becomes the line of demarcation. So what changed from being a baby to not being a baby?

“In a rant, Doyle described what made her ‘flabbergasted’ by the cover: the fact that the image showed a ‘well-developed, relatively late-term fetus’ with ‘no sign’ of the woman in whose ‘uterus it is presumably housed.’”

So let’s add some women.

Line up 270 pregnant women representing each day of a typical pregnancy with the 270th woman holding a recently delivered baby, choose the woman when it would be morally justified for her to abort her baby.

Once that’s done, I would then ask, what was the determining factor that consigned every unborn baby to the left of her back to the point of conception to be devoid of personhood and the full protection of the law?

Abortionists are beginning to understand this point since they (and this includes President Obama) maintain that there’s no time when a woman can’t kill her unborn baby. A fetus does not become a baby until he or she is born, and there are even some qualifications on this point among the pro-abortionist crowd.

“In 1993, ethicist Peter Singer shocked many Americans by suggesting that no newborn should be considered a person until 30 days after birth and that the attending physician should kill some disabled babies on the spot. Five years later, his appointment as Decamp Professor of Bio-Ethics at Princeton University ignited a firestorm of controversy, though his ideas about abortion and infanticide were hardly new. In 1979 he wrote, ‘Human babies are not born self-aware, or capable of grasping that they exist over time. They are not persons’; therefore, ‘the life of a newborn is of less value than the life of a pig, a dog, or a chimpanzee.’”1 (H/T: CRI)

Doyle needs to speak with Sara Fernanda Giromin (“Sara Winter”) from Brazil who was the founding member of Femen Brazil in 2012 and once an ardent supporter of abortion on demand:

“Bitch, No: Seven Times I have Been Betrayed by Feminism”

“[In 2015] the young activist has done an about-face and has declared war on feminism and abortion, and is apologizing to Christians for her offensive behavior. She has also published a short book detailing the abuse and disappointment she suffered at the hands of fellow feminists.

“Giromin’s changing attitudes were first revealed in October of this year, when she expressed her repentance for an abortion that took the life of her first child, and acknowledged that the recent birth of her second child had changed her attitudes regarding the right to life.

“‘I have repented of having had an abortion and today I ask for forgiveness,’ wrote Giromin. ‘. . . [O]ne month after the birth of my baby . . . my life has taken on a new meaning. I’m writing this while he sleeps serenely on my lap. It is the greatest sensation in the world.’

“‘Please, women who are desperate to abort, think carefully about it. I was very sorry I did it. I don’t want the same for you,’ she added.” (H/T: Lifesite News)

Hillary and Obama ‘Most Admired' Until You Read the Fine Print

Bible Scholar Says Eve Wasn’t Made from Adam’s Rib but His . . .