The Social Justice Warriors are on the march. They’ve just attacked a bronze statue of Christopher Columbus in Yonkers, New York. It was found beheaded. A Columbus statue in Baltimore was vandalized. “New York Mayor Bill de Blasio is currently reviewing a statue of the explorer at Columbus Circle as part of a larger look into racist monuments in the city.” (Axios)

If the statues of Christopher Columbus have to go, what about the cities named after the explorer?

Roughly 2.7 million Americans live in 54 counties, districts, cities, incorporated towns, boroughs, villages and census designated places named after Columbus… The explorer’s biggest legacies in terms of population are Columbus, Ohio, and the District of Columbia, both with populations in excess of half a million. (BizJournals) 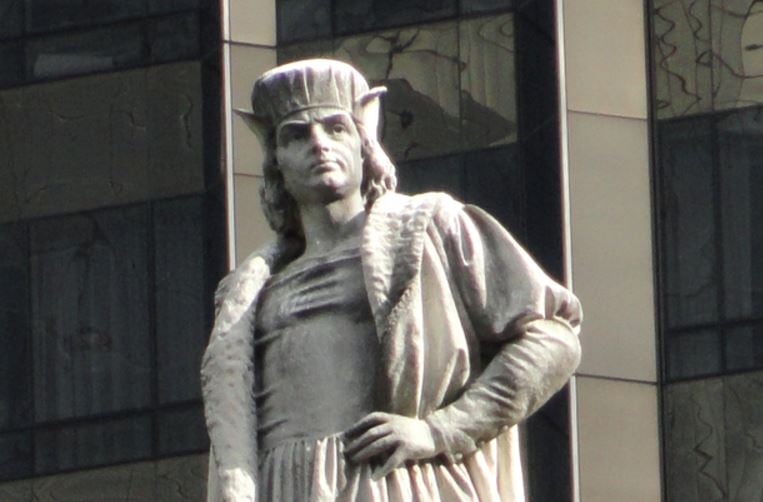 That’s right. Our nation’s Capital would have to be renamed.

Of course, Columbus Day must go as well as Western Civilization (the good, the bad, and the ugly). Dr. Gary North writes:

Half a century ago, the best universities required at least a year’s course on the history of Western civilization. Today, virtually no university does. The student radicals of the late 1960’s got their way: “Hey, hey, ho ho, Western civ has got to go.” About two dozen private colleges still teach it, but you have not heard of most of them. You probably have not heard of any of them. (Gary North.com)

It’s no wonder, therefore, that there is a general ignorance about history. What would we celebrate instead of Columbus Day? Here’s one suggestion:

Los Angeles Daily News reporter Elizabeth Chou published a story that included an interview with an L.A. resident of Aztec descent who wanted to abolish Columbus Day to take “another step forward.” Chou devoted four paragraphs to his plans to protest while wearing the garb of an Aztec. But she left out that his own people have a monstrous history of human sacrifice. If we’re going to celebrate indigenous peoples, let’s be honest about who they were.

Instead of Columbus, this guy wants to celebrate the Aztecs. I suspect that a lot of Americans would be OK with the substitute because they most likely have no idea who the Aztecs were and what they did.

While Cortez’s arrival caused Montezuma fear and dread, it gave hope to many of the Indian tribes who suffered under Aztec rule. The Aztecs had raided neighboring tribes for years, capturing thousands of victims for human sacrifice, a central part of Aztec religion. Cortez and his men were horrified at the Aztec’s slaughter of countless human lives.

When Cortez entered the Aztec capital, he spotted the center of religious worship, the sacrificial pyramid. He made his way up the hundred and fourteen steps with some of his best soldiers following close behind. Montezuma was at the top waiting for him. What Cortez and his battle-hardened men saw there shocked them like nothing they had ever seen before. Montezuma had just sacrificed some boys to keep the gods happy, and there was blood everywhere. Bernal Diaz, an eyewitness, describes the scene: “All the walls . . . were so splashed and encrusted with blood that they were black, the floor was the same and the whole place stank vilely. . . . The walls were so clotted with blood and the soil so bathed with it that in the slaughterhouses of Spain there is not such another stench.”1

In ancient Mexico, human sacrifice was an offering to the gods of people’s most precious possession, their blood. The custom that most startled the Spaniards, ritual cannibalism, was in fact the attainment of a spiritual idea: It was a true communion.2 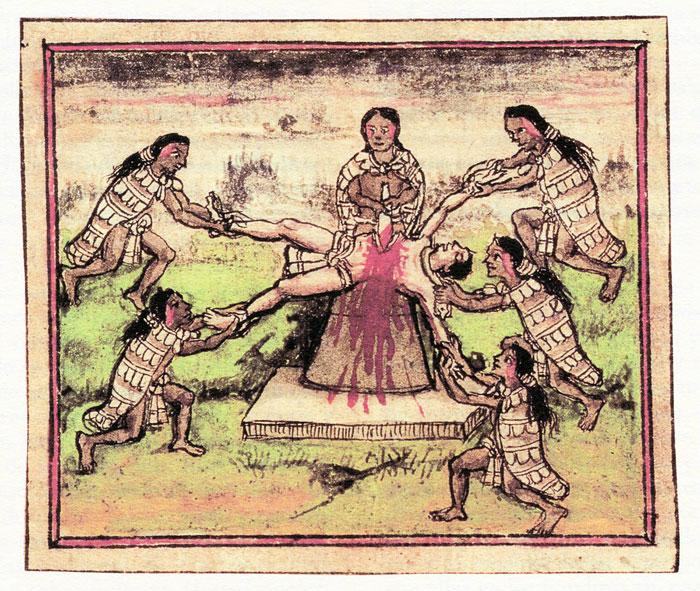 Aztec priests threw their victims down on a sacrificial stone, opened their chest with a flint knife, and pulled out the still beating heart, which was then burned in a stone urn. “Each year thousands of Aztecs had their hearts cut out of their living bodies and offered to the Sun god, who was also their god of war. Thousands more were burned alive, skinned, and drowned as offerings to other gods.”3 How would today’s historical revisionist explain the daily bloodletting? I can just see it now. “The Aztecs were a highly advanced culture, especially in the area of medicine. Open heart surgery was practiced on a regular basis. Rarely if ever did a patient live, but it was the courage of the Aztecs to attempt the impossible that set them apart from their Spanish rivals.”

Like the Aztecs, the Inca had a culture steeped in blood. Yet, we’re told that the “Inca were never that bloodthirsty. When they needed a special favor from the gods, hundreds were sacrificed.” Hundreds, thousands, what’s a few sacrificial victims between religious pluralists? We need to be more tolerant of their beliefs since the Incas were not malicious when they sacrificed their victims. Actually, the priests were doing them a favor.

Terrible as human sacrifice seems to us, we should remember that the Inca thought it necessary to their well-being. Sacrificial victims were not being punished for any crime; they were being rewarded for their beauty. The killing was done as painlessly as possible and without anger or hatred. Being sacrificed was, indeed, an honor that guaranteed eternal life with the gods and thus a “favor.”4

The above was written in the spirit of pluralism and toleration of everyone’s religion, even ones that encouraged digging out a person’s heart with a flint knife. If you’re one of the most favored, you might be drugged with cocoa (to ease the pain), dressed in fine clothes, and strangled with a rope before they tear your palpitating heart from your chest.

Certainly, the Catholic Conquistadors had their faults. Even so, their exploits, both religious and military, nearly eradicated ritual human sacrifice from Central and South America. It was Cortez’s repudiation of religious pluralism that liberated those tribes who suffered under the Aztec’s bloody religion.

William A. Hamilton, who formerly taught Western civilization at Nebraska Wesleyan University, offers a much-needed antidote to the misguided efforts of today’s multiculturalists:

The point is not to put down pre-Columbian culture. But before the politically correct multiculturists assign Columbus to the ash heap of history, let us not dismiss the conquistadors as less civilized than the natives they encountered. They ended massive ritual human sacrifice.5

Maybe a tribute to the Aztecs would be appropriate given the fact that our courts have ruled that it’s OK for a mother to kill her unborn child. A statue of an Aztec priest holding up an aborted baby would do the trick.