Joy Behar, like Whoopi Goldberg before her, is a Bible scholar. Jack Phillips went on The View to explain the case that the Supreme Court has agreed to hear. Jack Phillips is a baker and the owner of Masterpiece Cakeshop in Lakewood, Colorado. A homosexual couple wanted him to bake a cake for their same-sex wedding. He refused to bake the cake.

As you can imagine, it did not go over well with some of The View crew:

“‘Did you ever ask yourself what would Jesus do in this particular situation?’ Paula Faris asked Phillips. ‘Instead of denying them, do you think maybe Jesus would have said I don’t accept this but I’m going to love you anyways?’

How does Behar know this? Certainly not from reading these (and more) passages from the Bible.

Jesus loved the Samaritan woman who had multiple sex partners, but He did not approve of her sexual promiscuity (John 4) and would not have celebrated her next sexual encounter with the man with whom she was sexually engaged (4:18). Jesus loved the woman caught in the act of adultery, but He told her, “from now on sin no more” (John 8:11), hardly a statement that would lead Him to bake her a cake for a post-adultery party. Jesus made it clear that God created them male and female and marriage is between a man and a woman (Matt. 19:1-6) giving no evidence that he would bake a cake for people who violated this creation ordinance. According to the Bible, adultery and same-sex sexuality are sins. In what possible world would Jesus have baked a celebratory cake for sexual relationships the Bible condemns?

Keep in mind that Phillips did not refuse to sell the two men a cake. He refused to bake a cake for a particular event with a particular message that celebrated something he disagreed with in terms of his religious convictions. “I serve everybody all the time,” he stated on The View. “But I don’t make every cake for every event.” It’s not just same-sex weddings:

“I’ll sell anyone any cake I’ve got,” Phillips wrote in a letter to the Denver Post in 2016. “But I won’t design a cake that promotes something that conflicts with the Bible’s teachings. And that rule applies to far more than cakes celebrating same-sex marriages. I also won’t use my talents to celebrate Halloween, anti-American or anti-family themes, atheism, racism, or indecency.”

These anti-discrimination laws are not just about religion. Everyone should be protected from forced compliance to the shifting sands of government defined rights. The Supreme Court has declared that it’s legal for a mother to kill her unborn baby, but there shouldn’t be a law that compels a business to bake a cake with an image of a bloody aborted baby on it in celebration of the murder. 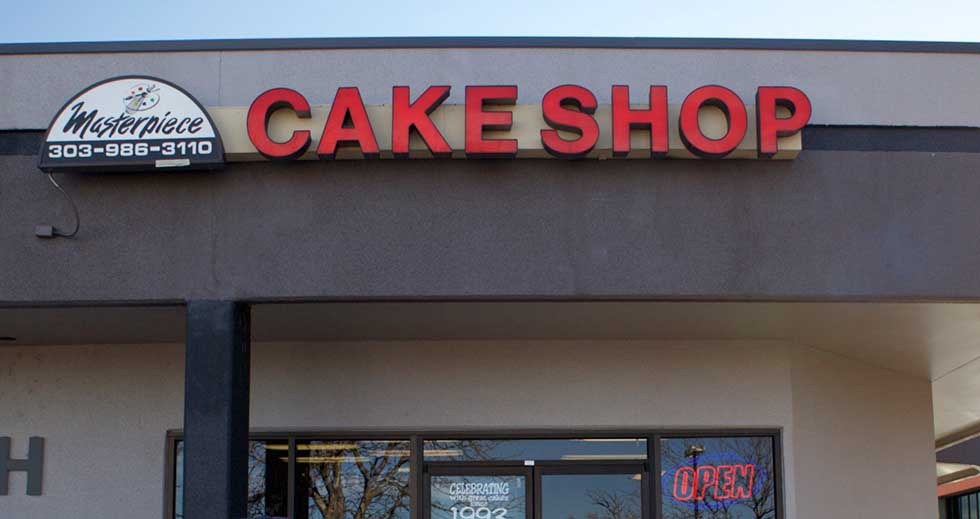 The two homosexuals sued Phillips, appealing to Colorado’s Civil Rights Division that is itself discriminatory:

A lawyer for Phillips … compared his case to one involving another Denver-area business, Azucar Bakery, that in 2014 refused to bake cakes with anti-gay messages and imagery, actions that the Colorado Civil Rights Division later ruled as not discriminatory.

“‘The government in Colorado is picking and choosing which messages they’ll support and which artistic messages they’ll protect,’ said Kristen Waggoner of the Alliance Defending Freedom, which took the baker’s case.”

If the Supreme Court does not rule in favor of Phillips and others who have been persecuted by compromised governments and courts, then no one will be free. There’s always someone out there who will make a cake, print a t-shirt, or provide flowers for silly, idiotic, and immoral practices. A baker should be free to refuse to bake a cake for any reason, and the person being refused should be free to go elsewhere. It’s that simple and right.