The New Testament and Civil Disobedience

The New Testament has similar accounts of resistance or civil disobedience to tyranny that are found in the Old Testament. When Peter and John were ordered by the rulers and elders of the people to stop preaching in the name of Jesus (Acts 4:18), the two apostles refused to follow their command: “Whether it is right in the sight of God to give heed to you rather than to God, you be the judge; for we cannot stop speaking what we have seen and heard” (4:19‑20). Peter and John could not stop speaking what they had seen and heard because they had been commanded by Jesus to preach in His name (cf. Matt. 28:18‑20; Acts 1:8; 1 Cor. 9:16).

On another occasion, some of the apostles were arrested for preaching and healing in the name of Jesus. Again, they were put in a “public jail” (Acts 5:18). During the night “an angel of the Lord . . . opened the gates of the prison” and commanded them to disobey the rulers of Israel: “Go your way, stand and speak to the people in the temple the whole message of life” (5:20). When the apostles again were confronted with the command not to preach and teach, their response was quick and sure: “We must obey God rather than men” (5:29).

The apostles’ obedience to God conflicted with the desires of the State. This resulted in the first apostolic death at the hands of a civil authority: “Now about that time Herod the king [Agrippa I] laid hands on some who belonged to the church, in order to mistreat them. And he had James the brother of John put to death” (12:1‑2). 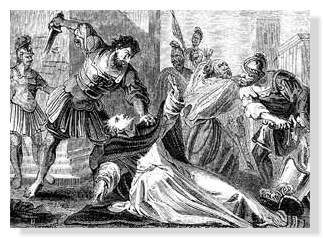 Peter was later arrested for similar “crimes” against the State (12:3). Obeying God rather than men is legitimate. God certainly set the example when He sent one of His angels to release Peter from prison (12:6‑8).

Either God or man is ultimately sovereign. When these sovereignties clash and conflict, the Christian, first a citizen of heaven (Phil. 3:20), must obey God rather than men. “William Tyndale (1490) taught that the truths of Scripture had authority over both the state and the church. Partly for this ‘heresy,’ government authorities in England tried to capture him, but Tyndale evaded them for years. He was finally caught, tried as a heretic, and executed in 1536.”1

There are restrictions on Caesar’s sovereignty, and by extension the sovereignty of all rulers, because we are told to “render to God the things that are God’s,” and Caesar is under God. The things that are God’s did not belong to Caesar, and what legitimate authority Caesar did possess had been given to him by God (Rom. 13:1). Did Jesus give Caesar, and by analogy all civil governments, unlimited authority to rule without regard to God’s commandments? Whatever else Matthew 22:21 can tell us, and it can tell us a lot, we know that Scripture limits the sovereignty of Caesar.

When Christians protest against unjust judicial decisions and overreaching congressional laws, they are often enjoined by their critics to remember that Caesar should be followed no matter what. The assumption seems to be that once “Caesar” speaks, there can be no objection or political action to challenge “Caesar.” But we do not live under Caesar! The Caesars have been dead for nearly two millennia. We live under a constitutional system with checks and balances, built-in limitations of power, and a mechanism whereby political changes can be made. Americans can change the balance of power in government my using the right and freedom to vote.

Our “Caesar” is the United States Constitution, each state constitution, and the will of the people to make changes to their government. The First Amendment states that we can “petition the government for a redress of grievances.” If this fails, Christians are still left with a final resolve – to resist – to obey God rather than men.

“But when Christ said ‘Render unto Caesar the things that are Caesar’s and unto God the things that are God’s,’ He gave to the State a legitimacy it had never before enjoyed, and set bounds to it that had never yet been acknowledged. And He not only delivered the precept but He also forged the instrument to execute it. To limit the power of the State ceased to be the hope of patient, ineffectual philosophers and became the perpetual charge of a universal Church.” ((Gertrude Himmelfarb, Lord Acton: A Study in Conscience and Politics (London: 1952), 45. Quoted in E. L. Hebden Taylor, The Christian Philosophy of Law, Politics, and the State (Nutley, NJ: Craig Press, 1966), 445-446. [↩]

Contrary to Obama Constitution Does Not ‘Guarantee’ Same-Sex Marriage

Professors Say a 90 Percent Tax Would be Good for America

The New Testament and Civil Disobedience