Almost everybody knows the story of the Trojan Horse, the story “about the subterfuge that the Greeks used to enter the city of Troy and win the war. In the canonical version, after a fruitless 10-year siege, the Greeks constructed a huge wooden horse, and hid a select force of men inside. The Greeks pretended to sail away, and the Trojans pulled the horse into their city as a victory trophy. That night the Greek force crept out of the horse and opened the gates for the rest of the Greek army, which had sailed back under cover of night. The Greeks entered and destroyed the city of Troy, decisively ending the war.”

Keep this story in mind as you read about how “House Minority Leader Nancy Pelosi, D-Calif., will appoint the first Muslim member to the House Permanent Select Committee on Intelligence, which deals with sensitive information on America’s war against terrorism.”

He’s Rep. André Carson, a Democrat from Indiana. “Politico reported that Carson’s nomination was announced by Pelosi in a closed-door weekly Democratic caucus meeting and would be announced publicly ‘in the coming days.’”

The difference between the Trojan Horse story and what Nancy Pelosi is doing is that the Trojans had no idea that there were Greek soldiers inside. 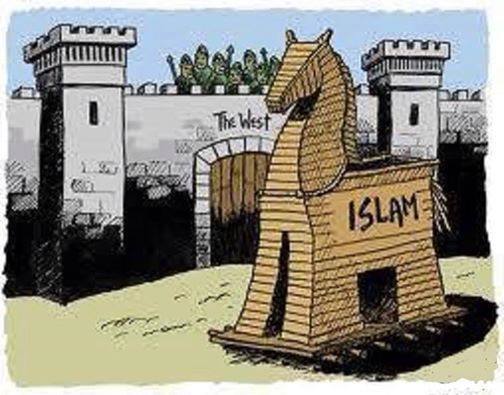 Where do Rep. Carson’s loyalties lie? With the United States of America or the Islamic States? If a time the time ever comes when the United States declares war on the Islamic State, in whatever form it manifests itself, can Rep. Carson be trusted with sensitive intelligence information? Will being a Muslim give him justification for siding with his fellow-Muslims over against America’s interests?

Of course, we don’t know, but by some of his past actions and statements we should be wary of someone like him being privy to important intelligence information that could make or break America.

The Qur’an teaches that “Muslims may make deals with their enemies, with unbelievers, engage in truces and the like in order to recuperate and gain strength. The overriding concern is the fight against unbelievers; if this can’t be achieved then it is ok to strategically lay low. To achieve more sneaky victories, it is acceptable to deceive, double-cross and break deals. Deals with unbelievers are not real deals, anyway, and are to be broken as soon as more aggressive moves can be made.”

Consider these factors about Rep. Carson as reported by Newsmax:

If “the foundation is the Quran,” then what about those passages that radical Muslims use to justify their violent acts against anybody who is not Muslim? Also, what about the subjugation passages?

“In a National Review column about Carson just weeks ago, Islam analyst Daniel Pipes, director of the Middle East Forum, wrote that Carson represents the ‘Islamists’ choice for the House of Representatives.’

“Pipes described Islamists as Muslims ‘who seek to replace the Constitution with the Quran and apply Islamic law in its entirety and severity.’”

Can Mike Huckabee be President by Supporting Common Core?