“Somebody has to do it.” These are the words of Larry Klayman of Freedom Watch regarding the possible criminal actions of Bill and Hillary Clinton. Since Congress is afraid to act, it’s up to private citizens to investigate the Clintons and growing suspicions about the way they are using their Foundation for possible criminal acts.

You may recall that when Oliver North was being questioned over Iran-Contra in 1987, the subject of a security system came up. The payment for a single security system (“an illegal gratuity”) that was used to protect him and his family got him in trouble. Here’s part of the testimony: 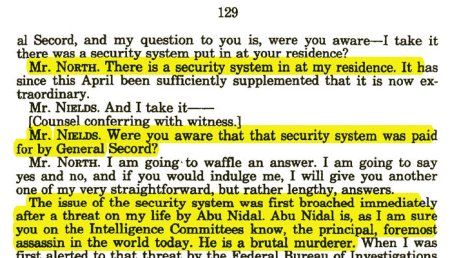 The Clintons, who seem to be passing out pavors and receiving  gret deal of money in return, are above scrutiny. But no more. The following is from the Tea Party News Network.

According to the Washington Examiner, a lawsuit filed by Larry Klayman of Freedom Watch, includes a legal request to have the judge seize the private server which Hillary Clinton used exclusively while she served as Secretary of State.

The Racketeering Influenced and Corrupt Organizations Act (RICO) case alleges the former first couple used their Clinton Foundation to trade political favors for donations or generous speaking fees for Bill Clinton while Hillary was head of the State Department.

Larry Klayman said the following in the US District Court of Southern Florida:

“Hillary Clinton deleted 32,000 email messages from her email server that included her communications arranging, negotiating, and agreeing upon speaking engagements by Bill Clinton in return for large speaking fees and donations to The Clinton Foundation.”

Klayman also asked the judge to order a “neutral forensic expert … to take custody and control of the private email server and reconstruct and preserve the official U.S. Government records relating to the conduct of U.S. foreign policy during Defendant Secretary Clinton’s term as Secretary of State.”

Hillary Clinton handed over 55,000 printed pages of emails to the State Department in November of last year and reportedly erased the remaining records off her private server. Congressman Trey Gowdy (R-SC) of the House Select Benghazi Committee discovered the private server while investigating the events surrounding the 2012 attack on the Libyan compound in which four Americans were killed.

Klayman listed myriad scandals involving missing records that have dogged the Clintons for two decades, including the fact that thousands of emails disappeared during Bill Clinton’s administration after White House officials threatened internal computer experts who blew the whistle on the “suppression.”

In court documents, Klayman said records on the Clintons’ private server are “in imminent danger of being lost” and urged the court to intervene.

Since our Congress has failed to ensure the integrity of the email server, Klayman stated that “somebody has to do it.”

Let’s hope this case has legs and the Clintons don’t squeak by with yet another crime committed against the people of the United States.

When Science Doesn’t Matter to Liberals