Sunday night I received a text message from Kirk Cameron informing me that his Saving Christmas website had been hacked by an extremist Muslim group.

When I got his text, I first thought the hacking was done by some homosexual group. They hate Kirk for his stand against same-sex marriage.

“A self-proclaimed civil rights group has announced that it will be protesting actor Kirk Cameron’s visit to New Jersey later this month due to his Christian views regarding homosexuality.

“The group, Ocean Grove United, announced in a blog post that it will be protesting Cameron’s arrival at the Great Auditorium in Ocean Grove, where he will be presenting a program entitled ‘Love Worth Fighting For Marriage Event’ on the evening of July 27 [2012].”

This isn’t the first time Kirk Cameron has been attacked for his mainstream views on homosexual marriage. In March of 2012, a group of former child actors attacked Cameron in a mocking and disgusting video.

It all started during the promotion phase of his film Monumental. Cameron appeared on a number of interview shows. One of them was with Piers Morgan. Instead of talking about Monumental, Morgan asked Cameron about his views on homosexuality. Here was Kirk’s answer:

“Marriage is defined by God in the garden between Adam and Eve, one man, one woman for life, til-death-do-you-part.”

Immediately the leftists in Hollywood pounced on his comments. Roseanne Barr had this to say: Kirk Cameron “is an accomplice to murder with his hate speech.” Here’s Kirk’s response to the comments from these “tolerant” Hollywood liberals:

“I should be able to express moral views on social issues, especially those that have been the underpinning of Western civilization for 2,000 years — without being slandered, accused of hate speech, and told from those who preach ‘tolerance’ that I need to either bend my beliefs to their moral standards or be silent when I’m in the public square.”

Now the Islamists are attacking Kirk’s religious views. It seems that the intolerant Left has more in common with the radical Islamists than the civilization built on the foundation of a Christian worldview.

The following is from TheBlaze:

“Sony’s Provident Films alerted producers over the weekend that SavingChristmas.com was taken over by a message from Ayyildiz Tim International Force, a hacker group described as anti-Christian, anti-Israel and anti-American.

“A member of the production team told TheBlaze Sunday that the attack was ‘fairly sophisticated’ but that they were able to quickly remove the group’s message from the website.

“The hackers struck again Monday morning, filling the website’s main page with Turkish text and an image of a man in full armor. Visitors were automatically forwarded to Ayyildiz Tim’s Twitter page after hearing music and a loud gunshot.”

Like the homosexuals, “Ayyildiz Tim . . . said that it targets those with negative ideas about its religion and country, according to Hack Read.” Like abortion, same-sex sexuality is a religion as is liberalism generally.

The Arabic proclamation read: “Whoever has bad ideas about our religion and our country including internet websites we will fight with them.” 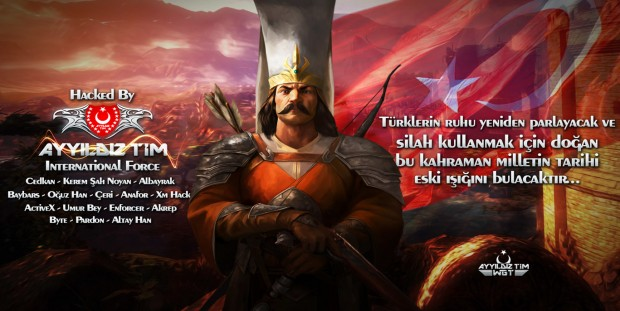 Director Darren Doane, who also stars in the film, had this to say:

“Christmas changed everything…even bad sweaters and cheesy celebrations are offensive to those who hate the true King! So hack away all ye Scrooges, but the Lord has come! You can hack a site, but you can’t hack Christmas!”

Here’s the trailer for the film Saving Christmas that will debut on November 14, 2014:

What the Armenian Genocide Can Teach Us about the Islamic Caliphate