Pastor John MacArthur sat down for an interview with Ben Shapiro. I was glad to see this happen. MacArthur did a good job in presenting the gospel clearly and without compromise. Unfortunately, Shapiro, who is Jewish and very smart, failed to pick up on a big mistake made by MacArthur. (There were others. See Joel McDurmon’s article “Comments on John MacArthur’s interview with Ben Shapiro.”) MacArthur said, “The people who ran the government were priests,” that the “orders of the priests” were “the officials of the government. That was a theocratic kingdom.”

I can understand how both men got this wrong. It’s been drilled into our heads that civil governance by ecclesiastical courts constitutes a theocracy and that’s what Israel was – a nation ruled by priests. This is not the case definitionally, biblically, or practically.

What MacArthur is describing is an ecclesiocracy. The Bible, neither in the Old Testament nor the New Testament, advocate for an ecclesiocracy. An ecclesiocracy means that the Church (a single local body or a network of Churches like a denomination or the Roman Catholic Church ruled by the Vatican) is the primary and absolute governing institution in society. An ecclesiocracy does not allow for a jurisdictional separation between Church and State, something the Bible demands. The institutional Church would rule the State, and the State would carry out the ecclesiastical objectives of the Church. This is not the biblical model. 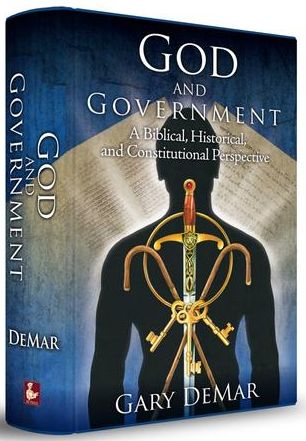 On sale at American Vision

Scripture describes a decentralized governmental system and a jurisdictional separation between Church and State. In biblical terms, government is broader than the State or the institutional church. Biblical governments include the family, church, and various levels of civil jurisdiction, all responsible to God’s government and supported by self-government under God. Only God’s government is defined in the singular (Isa. 9:6). Rousas J. Rushdoony writes:

[W]e do not equate government with the state. To do so is totalitarianism. Government is first of all the self-government of man; it is also the family, the church, the school, our vocation, society and its institutions, and finally, civil government. Our problem today is that government is equated with the state, an anti-Christian view.1

What then is a “theocracy”? Like ecclesiocracy, theocracy is made up of two Greek words: theos (God) and kratos (power or rule). In its simplest definition, theocracy means the “rule of God” (e.g., 1 Tim. 1:17). The word is not found in the Bible, although the concept is certainly present. The word was coined by Josephus, the Jewish historian for the Romans in the first century and appears in his Against Apion (2.164-165): “placing all sovereignty and authority in the hands of God.” “In the immediate context of the term, there is no reference to priests. Rather, the word is glossed by the phrase ‘ascribing to God the rule and power’….”2

Gabriel Sivan, a Jewish writer who has contributed articles to the Encyclopedia Judaica, offers the following as a helpful clarification of the term:

To the modern ear the word “theocracy” has distinctly pejorative overtones, suggesting the rule of some oppressive priestly caste, “government by state by immediate Divine guidance or by officials regarded as divinely guided,” to quote a standard definition. Yet, unlike certain other systems known in antiquity, “the ‘Theocracy’ of Moses was not a government of priests, as opposed to kings; it was a government by God Himself, as opposed to the government by priests or kings” (Dean Arthur Stanley, A History of the Jewish Church, 1862). The U.S. jurist and statesman Oscar Straus, a close associate of President Theodore Roosevelt, also stressed this point in his study of American culture’s indebtedness to the Hebraic concept: “The very fact that . . . with the single exception of Eli, no priest was ever elected to the magistracy during the entire period of the Commonwealth, decidedly negatives [sic] any such interpretation” (The Origin of the Republican form of Government in the United States of America, 1887).3

“Theocracy” describes the rule of God over all His creation. Jesus is said to be “the ruler of the kings of the earth” (Rev. 1:5). God is “the only Sovereign, the King of kings and Lord of lords” (1 Tim. 6:15). The most quoted Old Testament passage in The New Testament is Psalm 110.

On sale at American Vision

These principles have a long history, going back to the Old Testament. Moses became the chief judicial officer in Israel, assisted by numerous lesser civil magistrates (Ex. 18:17–26). Aaron, Moses’ brother, became the chief ecclesiastical officer as High Priest, assisted by numerous lesser priests (29:1–9; Lev. 8). Moses did not carry out the duties of a priest, and Aaron did not perform civil tasks.

During the period of the monarchy, King Saul served as a civil official while Ahimelech ministered as the chief ecclesiastical leader in the nation (1 Sam. 10 and 21). David was king while Abiathar carried out the duties of a priest (1 Chron. 15:11). David’s son Solomon ruled as a civil officer while Zadok pursued ecclesiastical obligations (1 Kings 1:45). King Joash and Jehoiada the priest (2 Kings 11) and King Josiah and the priest Hilkiah (2 Kings 22:4) maintained jurisdictional separation. Even after the return from exile, Church and State as parallel institutions operated with Governor Nehemiah (Neh. 7) and Priest Ezra (Neh. 8).

In biblical terms, there was never such a separation between Church and State that the State was free from following the guidelines of Scripture for its civil duties (Deut. 17:15–20). Both priest and king were required to sit before the law to be instructed. The priest was to follow guidelines pertaining to ecclesiastical affairs, while the king would glean from Scripture those directives designed for his civil office. If a case was too difficult for the civil ruler to decide, the Bible gives the following instruction: “You shall come to the Levitical priest or the judge who is in office in those days, and you shall inquire of them, and they will declare to you the verdict in the case” (17:9). Notice the use of “the Levitical priest or the judge.” Both were required to be experts in the law. The judges did not follow a different standard in adjudicating legal issues. The Levites were to assist the civil ruler as much as the judges, but the Levites were not called on to rule in place of the king.

King David did not dismiss the exhortation of the prophet Nathan after being confronted for his sins of adultery and murder. Although David at first did not know that the rebuke was leveled against him, he did not act as if it was unusual for someone in Nathan’s position to seek the counsel of the king and even to offer the king advice. David accepted Nathan’s rebuke. He did not tell Nathan that there is a “separation between Church and State”: “Then David said to Nathan, ‘I have sinned against the LORD’” (2 Sam. 12:13). Modern-day separationists are closer to the way Herod responded when John the Baptist rebuked him for his adultery (Mark 6:14–29). “What a ruler does privately is none of your business.”

There is always the danger of jurisdictional usurpation, when, say, civil government removes the jurisdictional boundaries and enters the domain of the Church. The Bible cites several examples of how the king sought to overrule the authority and jurisdiction of the Church. King Saul assumed the duties of the priests when he offered sacrifices. He stepped out of bounds from his kingly duties (1 Sam. 15:9–15, 22). In another place, Saul killed the godly priest Ahimelech because he would not fulfill the king’s political goals (1 Sam. 22:6–23). King Jeroboam established his State religion in Bethel and Dan. Non-Levites of the worst character were appointed to serve as priests (1 Kings 12:26–31).

Then there’s the incident of King Uzziah who crossed the boundary in a seemingly minor way but was judged harshly. God is serious about jurisdictional church-state separation. The king is said to have been “proud” (2 Chron. 26:16). His pride led him to go beyond his legitimate civil jurisdiction and move into the ecclesiastical area. While he was “chief of State,” being the king in Judah, he was not a priest. King Uzziah could not assume the role of a priest and perform in the most basic ecclesiastical duties. He had no jurisdictional authority to serve in the Temple, the Old Testament equivalent of the New Testament Church. Uzziah ignored God’s law and “acted corruptly, and he was unfaithful to the LORD his God, for he entered the temple of the LORD to burn incense on the altar of incense” (2 Chron. 26:16).

The king was struck with the most feared disease in all Israel: leprosy! “And king Uzziah was a leper to the day of his death; and he lived in a separate house, being a leper, for he was cut off from the house of the LORD” (v. 21). He lost access to the Temple, was isolated from the general population, and lost his kingdom to his son, Jotham, who “was over the king’s house judging the people of the land” (v. 21). Azariah the priest was not passive in this incident. He knew the limitations of the king’s power. He, along with “eighty priests of the LORD” (v. 17), took action against the king. They “opposed Uzziah the king” (v. 18), making it clear that “it is not for you, Uzziah, to burn incense to the LORD, but for the priests, the sons of Aaron who are consecrated to burn incense” (v. 18). The priests commanded Uzziah to “get out of the sanctuary” (v. 18).

These “ecclesiastical officials” are called “valiant men” (v. 17) because they acted with great risk. While there were eighty of them, the king still commanded an army. He could have put them to death.

There was a precedent for this when Ahimelech the priest helped David against King Saul (1 Sam. 21–22). Saul called on Doeg the Edomite to attack the priests after the king’s own servants refused: “And Doeg the Edomite turned around and attacked the priests, and he killed that day eighty-five who wore the linen ephod” (1 Sam. 22:18). Doeg the Edomite had no qualms about killing the priests. King Uzziah had Saul’s hate in his eye: “Uzziah, with a censer in his hand for burning incense, was enraged” (2 Chron. 26:19).

There have been times when the Church has forgotten its God-ordained jurisdictional role. The Church can deny its prophetic ministry when it is seduced by politics, that is, to see politics as the sole way to advance God’s kingdom. Isn’t this what happened when the people wanted to crown Jesus as King, to make Him their political ruler? (John 6:15). They showed their true allegiance when Jesus refused to accept their view of what they thought God’s kingdom should be like. “The distribution of bread moved the crowd to acclaim Jesus as the New Moses, the provider, the Welfare King whom they had been waiting for.”4 If you want to talk about theocracy, today’s Welfare State, implemented and managed by the State, is a true theocracy. The State is God walking on earth. It knows of no higher authority than itself.

When Jesus did not satisfy their false conception of salvation, they turned elsewhere and cried out: “We have no king but Caesar” (John 19:15). They denied the transforming work of the Holy Spirit to regenerate the dead heart of man. For them and for many today, man’s salvation comes through political power. Jesus, however, is not a political savior, but His saving work should impact politics because civil government is ordained by God.