Are student yearbook photographs censored because of their political messages? “Absolutely not,” a New Jersey public school has assured us. But evidently the mouse are at play…

A young man at a high school in New Jersey had his yearbook photograph Photoshopped by somebody. Nobody knows who, exactly, but the school has taken action by suspending the yearbook advisor. She is a teacher who makes about $88,000 a year.

The issue? The young man wore a “Make America Great” again t-shirt for his yearbook photo. But, much to his shock and surprise, when he opened up his yearbook, Donald Trump’s slogan was gone. Instead, it appeared as if he had worn nothing but a simple black t-shirt that day. And this wasn’t the only case of political censorship, inadvertent or not, associated with this yearbook. 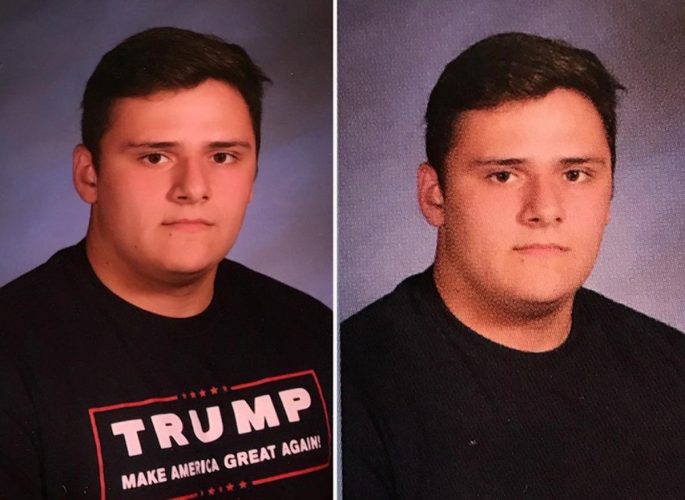 CAUGHT IN THE ACT

Here are the details:

There have been three reported instances of censorship in the yearbook, all revolving around students supporting President Donald Trump.

Grant Berardo, a junior at the school, took his school pictures wearing a navy blue “Make America Great Again” shirt from the campaign. But in the yearbook, his photo had been digitally altered so it resembled a nondescript black T-shirt.

“It was Photoshopped,” Grant said in an interview on Friday. “I sent it to my mom and dad, just like ‘You won’t believe this.’ I was just overall disappointed.

“I like Trump, but it’s history too. Wearing that shirt memorializes the time,” he said.

According to CNN, a brother and sister at the school also alleged censorship. Wyatt Debrovich-Fago wore a sweater vest in his picture with a Trump campaign logo, but it was seemingly cropped out of the photo.

His sister, Montana, served as president of the school’s freshman class. That role usually comes with a quote next to a picture, and Montana selected: “I like thinking big. If you are going to be thinking anything, you might as well think big.”

But in the yearbook, hers was the only photo without a quote.

“I want to know who thought it was okay to do this,” Janet Dobrovich-Fago, the teens’ mother, told CNN. “I want the school to seek disciplinary action and to be held accountable.”

In a statement released Sunday night, Wall school board President Allison Connolly said the board “found the allegations of wrongdoing disturbing and take the charge that students have had their free speech rights infringed upon very seriously.”

Schools have official policies about this thing or that thing. But no one is really minding the store. The principal and the superintendent have apparently had their heads in the sand. There is little oversight of the teachers. They make a lot of money, and, like in the case of this yearbook advisor, they have tenure. They are practically immune to firing. Building a discipline case is hard. So why even bother providing oversight? It’s not like you can fire them anyway. There’s too much paperwork involved. Paperwork is boring.

So, the teachers have free reign. They pull little tricks like this. But, every now and then, they get caught. If the editing was intentional and politically motivated, then whoever did it thought the edits would be so small that they wouldn’t be caught. But the students who had their entries edited were every bit as politically motivated as the editors.

They edited the wrong students. They took the bait, and they got caught. If they were thinking they were smarter than the kids, then they were wrong.