Young people are being enlisted in a campaign to disarm their parents. It’s reminiscent of the Hitler Youth Movement.

Hitler Youth Leader Baldur von Schirach “labeled 1934 as ‘The Year of Training,’ and proclaimed during a speech: ‘Whoever marches in the Hitler Youth is not a number among millions but the soldier of an idea. The individual member’s value to the whole is determined by the degree to which he is permeated by the idea. The best Hitler Youth, irrespective of rank and office, is he who completely surrenders himself to the National Socialist world view.’”

Now it seems that “Progressives” are taking a page from the Hitler Youth playbook and are enlisting children in a campaign to disarm their parents:

“A startling new anti-gun ad released by a San Francisco-based production company encourages children to commit a series of crimes by stealing their parents’ guns and turning them over to school officials, The Daily Caller reported Monday.

“Sleeper 13 Productions released the controversial video on Dec. 13. It shows a pouty, young boy wandering into his parents’ bedroom, stealing a handgun out of their dresser drawer and then shoving it into his backpack. 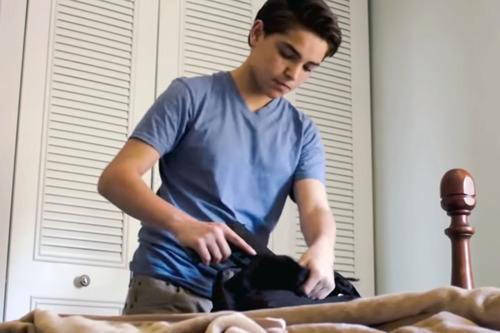 “The boy then carries what is presumably a loaded weapon into his classroom. After class, he approaches the teacher, takes the gun out of his backpack and slams it onto her desk.

“‘Can you take this away? I don’t feel safe with a gun in my house,’ the boy says.

“According to the credits, the video was shot with permission from North Oakland Community Charter School in Oakland.”

It won’t be too long before “Progressive Youth” groups will be confiscating conservative literature, Bibles, religious books, and anti-Progressive campaign literature to “Progressive Youth Centers,” what used to be Public Schools but are in reality government schools run by state governments and an ever-increasing powerful and controlling Federal bureaucracy.

Of course, by disarming parents these families will be left defenseless. I can see some students taking notes on what homes are without guns and then passing the information onto gangs for a small fee.

The thieves won’t have anything to worry about because they know that the Progressive Youth Movement has removed any resistance.

Government schools will become propaganda and indoctrination centers like the schools in Nazi Germany:

“National Socialist teachers of questionable ability stepped into grammar school and high school classrooms to form young minds, strictly abiding by the Party motto: ‘The supreme task of the schools is the education of youth for the service of Volk and State in the National Socialist spirit.’ They taught Nazi propaganda as fact which was then recited back by their students as unshakable points of view with no room for disagreement or discussion.”

If you send your children to a government school, there’s a good chance, actually, a great chance, that they are being indoctrinated in the ways of the Progressive State.