An article in GQ magazine written by the editors declares that the Bible is one of 21 books that you don’t need to read. It’s 12th on the list and the description by Jesse Ball begins with the following comment:

The Holy Bible is rated very highly by all the people who supposedly live by it but who in actuality have not read it.

More people live by it that have not read it, and that’s the main reason that the Bible is the most significant book in all of history. Vishal Mangalwadi’s The Book that Made Your World: How the Bible Created the Soul of Western Civilization develops this theme. The literature, morality, redemptive nature of grace, mercy, forgiveness, law, education, and the laws of creation (nature) permeate every facet of our being and our world.

Those who have read it know there are some good parts, but overall it is certainly not the finest thing that man has ever produced. It is repetitive, self-contradictory, sententious, foolish, and even at times ill-intentioned.

The Bible is not a novel. It’s a history of our world, a story of fall and redemption, to put in language that someone like Ball might understand. Yes, it’s repetitive because the human condition is repetitive. It’s not self-contradictory. In fact, the compilation of 66 individual “books” is remarkably cohesive if a person actually studies it.

It is “sententious,” and that’s why many people don’t like it. There is morality in the Bible; there is judgment; two things the self-willed libertine does not like. “Foolish”? For the materialist who believes we evolved from a primordial soup of chemicals and a he can become a she and a she can become a he, I imagine the Bible does seem foolish.

The Bible does mention foolishness: “The fool has said in his heart, ‘there is no God’” (Ps. 14:1). The Apostle Paul writes:

For the message of the cross is foolishness to those who are perishing, but to us who are being saved it is the power of God. For it is written: “I will destroy the wisdom of the wise; the intelligence of the intelligent I will frustrate.”

Where is the wise person? Where is the teacher of the law? Where is the philosopher of this age? Has not God made foolish the wisdom of the world? For since in the wisdom of God the world through its wisdom did not know him, God was pleased through the foolishness of what was preached to save those who believe. Jews demand signs and Greeks look for wisdom, but we preach Christ crucified: a stumbling block to Jews and foolishness to Gentiles, but to those whom God has called, both Jews and Greeks, Christ the power of God and the wisdom of God. For the foolishness of God is wiser than human wisdom, and the weakness of God is stronger than human strength (1 Cor. 1:18-25).

Tell former slave Frederick Douglass (1818–1895) the Bible is foolish. When the slave owner of Douglass discovered that his wife was teaching his 12-year-old slave to read the Bible, he stopped her. “If he learns to read the Bible it will make him ever unfit to be a slave. In no time “he’ll be running away with himself.”

In his later years, Douglass reflected on that incident as the first antislavery lecture he had ever heard, and it inspired him to do anything he could to read more of the Bible. Eager to learn more about the Bible, Douglass recalled, “I have gathered scattered pages from this holy book, from the filthy street gutters of Baltimore, and washed and dried them, that in the moments of my leisure, I might get a word or two of wisdom from them.” 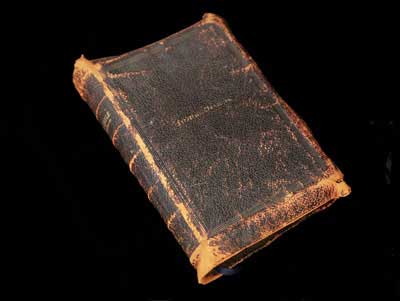 Douglas had begun to realize what his “master” understood. “There was power, indeed subversive, revolutionary power, in reading and interpreting the Bible for oneself, and that the institution of slavery in fact depended on controlling biblical literacy—who can read the Bible when and how.”

Let the reader reflect upon the fact, that, in this Christian country, men and women are hiding from professors of religion, in barns, in the woods and fields, in order to learn to read the Holy Bible. Those dear souls, who came to my Sabbath school, came not because it was popular or reputable to attend such a place, for they came under the liability of having forty stripes laid on their naked backs. Every moment they spend in my school, they were under this terrible liability; and, in this respect, I was sharer with them. Their minds had been cramped and starved by their cruel masters; the light of education had been completely excluded; and their hard earnings had been taken to educate their master’s children. I felt a delight in circumventing the tyrants, and in blessing the victims of their curses.1

Here’s the irony. In the same article that Jesse Ball’s dissing the Bible appears, Caity Weaver disses Mark Twain’s Huckleberry Finn for Douglass’ Narrative of the Life of Frederick Douglass:

While Jim, the affable slave friend of Huck Finn, exclaims things like “Lawsy, I’s mighty glad…,” Frederick Douglass makes observations like “I love the pure, peaceable, and impartial Christianity of Christ: I therefore hate the corrupt, slaveholding, women-whipping, cradle-plundering, partial and hypocritical Christianity of this land.”

The history of Western civilization is the history of the development and implementation of the Bible to all of life. While the GQ article and a book like James A. Haught’s 2000 Years of Disbelief2 try to counter this assertion by claiming that for two millennia no one of any significance believed the truths of the Christian religion, especially in the realm of science, the facts of history demonstrate that Christian scientists, explorers, philosophers, artists, inventors, and writers have dominated their fields.

Dan Wallace, a professor at Dallas Theological Seminary and Executive director at The Center for the Study of New Testament Manuscripts (CSNTM), comments:

Even skeptics and atheists recognize the Bible as the most influential book on western civilization ever written. And as for literature, H. L. Mencken, no friend of Christianity, said, “The King James Bible is ‘unquestionably the most beautiful book in the world.'” Mario Pei claimed, “The King James Bible and Shakespeare together are responsible for well over half of all our language clichés and stock phrases.”

Rodney Stark argues there is “no inherent conflict between religion and science” and “Christian theology was essential for the rise of science.” After a thorough study of the Scholastic period, he shows “that the leading scientific figures in the sixteenth and seventeenth centuries overwhelmingly were devout Christians who believed it their duty to comprehend God’s handiwork.”3

In the book 1,000 Years, 1000 People: Ranking the Men and Women Who Shaped the Millennium,8 we find a picture quite different from the one painted by Haught. Of the first ten entries, six of the rankings were Christians. Johannes Gutenberg (1394?–1468), inventor of the printing press, is first on the list. The first book that came from his press was the Bible. Christopher Columbus (1451–1506) fills the number two spot. It was Columbus who saw in the Bible a directive to take the gospel—“the Holy Christian Faith”—around the world.9

He is followed by Martin Luther (1483–1546) who set the Protestant Reformation in motion and whose translation of the Bible into German brought uniformity to the German language. Following him is Galileo Galilei (1564–1642) who systematically attacked the church’s reliance on Aristotle’s inaccurate cosmology over against the Bible and changed the way we view the cosmos.10 Isaac Newton (1642–1727), in addition to his scientific discoveries and laying the foundations for differential and integral calculus, wrote numerous works on Christian theology.11 One of his most noted works is Observations Upon Prophecies of Daniel, and the Apocalypse of St. John, published six years after his death. He is ranked sixth on the list. He read the Bible daily throughout his life and wrote over a million words of notes regarding his study of it.

Isaac Newton believed the Bible is literally true in every respect. Throughout his life, he continually tested Biblical truth against the physical truths of experimental and theoretical science. He never observed a contradiction. In fact, he viewed his own scientific work as a method by which to reinforce belief in Biblical truth.12

Thomas Aquinas (1225–1274), who wrote extensively on the proofs for God’s existence, is ranked eighth. He argued that the mind, using reason to think through the reality of God’s existence (Isa. 1:18), is a gift given to us by God, an attribute that separates us from the animal creation.

We know very little about William Shakespeare’s religious beliefs. He is fifth on the list. We do know that he was a member of the Church of England where he and his children were baptized.13 While Peter J. Leithart correctly notes that there is a “deeply Christian worldview embodied in his plays,”14 and Louise Cowan maintains that “his perspective was not simply spiritual, but overtly Christian,”15 we must be careful not to read Shakespeare as a symbolic literary course on the Bible. Even so, “it is seen that Shakespeare drank so deeply from the wells of Scripture that one may say, without any straining of the evidence, without the Bible Shakespeare could not be.”16

Like Shakespeare, little is known of the specifics of Leonardo da Vinci’s religious commitment. We do know, however, that his most memorable art subjects came from the Bible (Adoration of the Magi, The Baptism of Christ, The Last Supper, The Resurrection of Christ). Leonardo, ninth on the list, also applied his talents to mathematics, music, anatomy, botany, and engineering. He was the epitome of what it meant to be a Renaissance Man.

Ludwig van Beethoven, who holds the tenth spot, was a Roman Catholic who mistrusted the clergy. While little is known of his religious convictions, “many of his musical works reveal definite Christian imprints. These are plainly evident in Missa Solemnis [Solemn Mass] and in Christ on the Mount of Olives as well as in other religious compositions.”17

As these and many other historical examples would show, western civilization cannot be explained without reference to a biblical worldview.

Modern biographers of scientists seem oblivious to the fact that up to the end of the eighteenth century “most intelligent men, and thus most scientists, held that divine revelation could tell them what had happened in the beginning, how the Creator had so to speak, set the stage of the world which their science was now newly investigating.18

From helping the poor, widows, and orphans to the development of science, the building of hospitals, the abolition of slavery, and the development of art and music, and so much more, the Bible has been the instrumental document. With changed hearts through the redemptive work of Jesus Christ and the life-transforming power of the Holy Spirit in renewing the mind, the world has changed. Humanists, secularists, and materialists are seeking credit for these great achievements, but neither the Bible nor history is on their side.

“In polite society, the mere mention of the Bible often introduces a certain measure of anxiety. A serious discussion on the Bible can bring outright contempt. . . . The Book That Made Your World, by Vishal Mangalwadi, brings to mind Alexis de Tocqueville’s early-nineteenth-century classic, Democracy in America. . . . A culture can barely begin, let alone sustain, any serious intergenerational attempt to comprehend, interpret, and respond to the riddles of life and the universe unless it has some reasonably comprehensive worldview.”

Did the Call For Christians to "Just Preach the Gospel" Result in California Becoming Anti-Christian?

Should Christians Still Believe in the ‘Rapture’?