Former Pres. George W. Bush has finally spoken out against a sitting president. For eight years he was relatively silent regarding the policies and methods of former Pres. Barack Obama. When he decides to speak, he attacks a sitting Republican President who is trying to fix our broken immigration system:

“Our identity as a nation, unlike other nations, is not determined by geography or ethnicity, by soil or blood. … This means that people from every race, religion, ethnicity can be full and equally American. It means that bigotry and white supremacy, in any form, is blasphemy against the American creed.”

Actually, our nation is determined by geography as well as a contract called the Constitution. Pres. Trump’s immigration policies are not about ethnicity, race, or religion. Well, maybe about some aspects of religion. If there is a religion that uses religion to justify terror against a nation, then, yes, there should be extreme vetting as there has always been against people who want to destroy our nation.

What is an “American creed”? The Latin word credo is the first word in the Apostles’ Creed and is translated as “I believe.” In most cases, it’s a religious declaration. Religion — the ultimate credo — is an inescapable concept. Today’s political credo is Statism. Statism is today’s most popular religion.  “In God We Trust” is a slogan that’s rarely followed by politicians. It’s more “In Government We Trust.” To prove that government is a religion, we are forced to pay an exorbitant tithe in the form of confiscatory taxes for that trust. The promise is always, “With more money and power the government will save you.” The sad thing is most Americans like it this way. That’s why the majority of Americans did not protest the government confiscation of gold:

“Blasphemy” is a crime against God. Unless the State is God, there is no blasphemy. It’s blasphemy to claim that a national creed can be blasphemed against.

Government as God has a long history. The Pharaohs were considered gods. The Caesars. Phrases like Dominus et Deus (“Lord and God”) “were addressed to Domitian by flatterers who wished to earn favors from the emperor.” Little has changed in nearly 2000 years. Flattery is given to get favors from the State because the State acts as if it is a god.

The coin presented to Jesus had the following inscription: 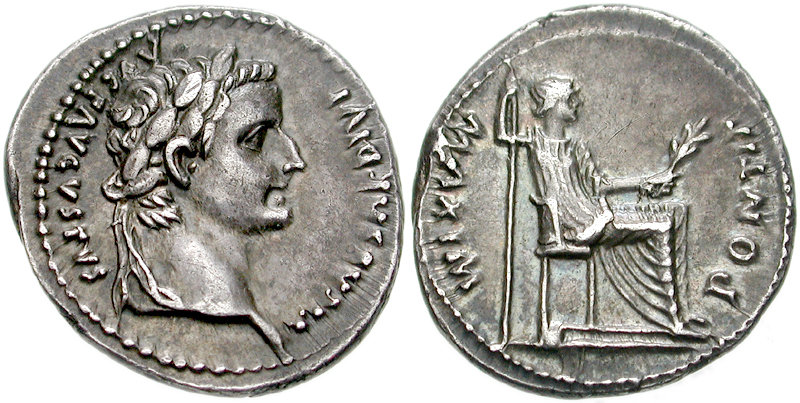 Constitutionally, the State has been given a limited amount of power to rule, but many have used the State to seek power for the sake of power. As O’Brien tells Winston Smith in George Orwell’s Nineteen Eighty-Four, “Power is not a means; it is an end.” Later on, Smith shows that he finally understands when he painfully writes: “GOD IS POWER.” And by “God,” he means government.

Herbert Schlossberg writes the following in his book Idols for Destruction:

The paternal state not only feeds its children, but nurtures, educates, comforts, and disciplines them, providing all they need for their security. This appears to be a mildly insulting way to treat adults, but it is really a great crime because it transforms the state from being a gift of God, given to protect us against violence, into an idol. It supplies us with all blessings, and we look to it for all our needs. Once we sink to that level, as [C.S.] Lewis says, there is no point in telling state officials to mind their own business. “Our whole lives are their business” [God in the Dock, p. 134]. The paternalism of the state is that of the bad parent who wants his children dependent on him forever. That is an evil impulse. The good parent prepares his children for independence, trains them to make responsible decisions, knows that he harms them by not helping them to break loose. The paternal state thrives on dependency. When the dependents free themselves, it loses power. It is, therefore, parasitic on the very persons whom it turns into parasites. Thus, the state and its dependents march symbiotically to destruction.

When the provision of paternal security replaces the provision of justice as the function of the state, the state stops providing justice. The ersatz [artificial and inferior substitute] parent ceases executing judgment against those who violate the law, and the nation begins losing benefits of justice. Those who are concerned about the chaos into which the criminal justice system has fallen should consider what the state’s function has become.  Because the state can only be a bad imitation of a father, as a dancing bear act is of a ballerina, the protection of this Leviathan of a father turns out to be a bear hug.2

Let’s not forget the war in Iraq. There are numerous countries that have weapons of mass destruction, and we have not invaded them. As of this date, there is no real evidence that Iraq had any such weapons. The cost in lives, money, and bullying has been enormous. “The U.S. wars in Iraq and Afghanistan could cost taxpayers a total of $2.4 trillion by 2017 when counting the huge interest costs because combat is being financed with borrowed money.” Then there are the casualties on both sides.

We’ll never the full extent of the non-American casualties:

Former Pres. Bush can talk all he wants about immigration and America’s “creed,” but he has much more to answer for by going to war against a nation that did not attack the United States. Iraq is in shambles. The Christian minority has been driven out.

A Lesson from the Nuremberg Trials and Today’s Morality Problem

Does it really pay to be a nice guy?