The title to this article is the logical extension of protests against Indiana’s Religious Freedom Restoration Act. If a baker is discriminating by refusing to bake a cake for a same-sex wedding, then a printer is discriminating for not printing a “Death to Israel” sign.

Homosexuals and their ignorant supporters are upset that Indiana has passed a freedom of religion law. I’m confused. I thought the First Amendment guaranteed that the government could not “prohibit the free exercise” of religion. That’s what it says. It does not add “unless a group that practices same-sex sex objects.”

The right is very comprehensive, that’s why I can’t understand why we ever needed a national Religious Freedom Restoration Act (RFRA). But we got one, and because the Supreme Court ruled that it did not apply to the states, states began to enact their own version of the 1993 law signed by then President Bill Clinton.

“A federal RFRA signed by President Clinton in 1993 shares language with Indiana and other states’ bills, prohibiting the government from ‘substantially burdening’ individuals’ exercise of religion unless it is for a ‘compelling government interest’ and is doing so in the least restrictive means.”

Sixteen additional states have introduced similar “legislation this year regarding the creation of, or alteration to, a state religious freedom law. Currently, 19 states have Religious Freedom Restoration Acts (RFRAs).”

When Barack Obama was an Illinois state senator, he voted “for a version of the Religious Freedom Restoration Act. It passed the Illinois Senate 56-0 and became law on July 1, 1998.” So why all the same-sex angst over Indiana’s law?

The homosexual movement is similar to the Taliban. Any infraction or any attempt to soften their version of the law will result in forceful retaliation. It’s no wonder that words like “Gaystapo” and “Gay Mafia” are often used to describe what is taking place around the country today. “Don’t go against the gaysters.”

Bakers, florists, and photographers have learned the hard way not to go against the Gay Mafia. They didn’t refuse to serve homosexuals. They only refused to service events that went against their religious beliefs as any rational person would expect them to.

Personally, I think everybody should have the freedom not to serve events they oppose. Why is this even a debatable subject?

Should a black business owner be forced to service a white supremacy group or the KKK? Of course not. 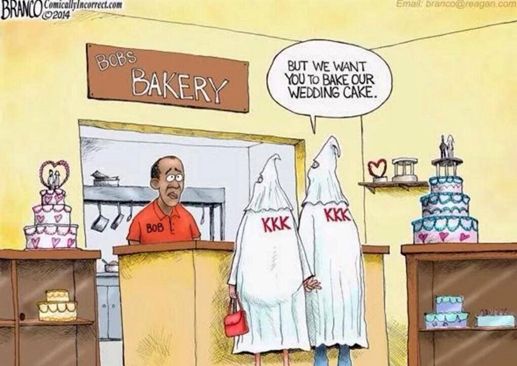 If the homosexuals and their brain-dead supporters get their way, it would not be illogical to argue that a Jewish business must print “Death to Israel” signs and t-shirts.

At the moment, homosexuals who are opposing the Indiana Religious Freedom Restoration Act and those in 19 other states would say that this is a ridiculous analogy. No one would ever do such a thing. Of course, that’s not the point.

Why should one group be permitted to apply his religious liberty and deny service to an ideology or event and not another?

Everybody is protected by a state’s Religious Freedom Restoration Act. If a homosexual bakery is asked to make a cake for an anti-same-sex marriage conference, it should not have to make it.

If a pro-abortionist who owns a bakery is asked to make a cake for an anti-abortion event, the pro-abortionist should not be forced to make it. Such a law protects everybody equally, something homosexuals do not want.

A Muslim printer would not have to print t-shirts that read “Muhammad Was a False Prophet.”

Lawrence Meyer’s comments in Townhall are spot on:

“The Left is so very strident against discrimination – oh, but only gays, blacks, Hispanics, illegal immigrants, and Radical Islamists need apply for the victocracy.

“Yet they don’t care about discriminating against Christians, and will do anything they can to align themselves against the Jews and Israel, because Leftist philosophy is anti-freedom, anti-religion, and ultimately anti-human.”