Feminists are upset about comet scientist Matt Taylor, who has a PhD in space plasma physics from Imperial College London and works on the Rosetta Project, was wearing a shirt about the comet landing while being interviewed that depicts scantily glad comic-book style women.

“After years of effort, the European Space Agency’s lander Philae landed on a comet 300 million miles away. At first, people were excited. Then some women noticed that one of the space scientists, Matt Taylor, was wearing a shirt, made for him by a female ‘close pal,’ featuring comic-book depictions of semi-naked women. And suddenly, the triumph of the comet landing was drowned out by shouts of feminist outrage about … what people were wearing. It was one small shirt for a man, one giant leap backward for womankind.”

Here’s Dr. Taylor and his shirt for which he later tearfully apologized to the watching world: 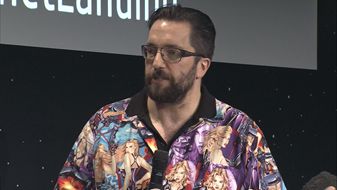 So while these distraught “feminists” attacked a man for wearing a shirt that did them no harm and whose images are found in dozens of published comic books each week, they didn’t say anything about three live naked women who went to Vatican City where they simulated shoving crucifixes into their anuses to express their contempt for God.

“The three women pulled off their stunt on St. Peter’s Square, the enormous plaza located right in front of St. Peter’s Basilica in the Vatican City.

“Two of them had ‘Keep it Inside’ scrawled across their backs, an apparent reference to their anger that the Pope’s activities extend beyond the tiny papal enclave in Rome.

“The trio, decked out in nothing but black ankle boots, leather miniskirts, and flower garlands in their hair, dropped to all fours and began simulating a lewd act with the crucifixes.

“Police immediately swarmed on the women as bemused tourists snapped photographs. Covering the women’s bared breasts with coats, the cops dragged them off, with one of the women crying: ‘The pope is not a politician, god is not a magician.’”

Government Shutdown is a Constitutional and Popular Way to Stop Obama