As faith in the Establishment wanes, Bible skeptics are declining

A website has published an infographic that explains that Americans’ trust in media is at an all-time low of 32%. Not only that, but their trust in government, business, and non-governmental organizations, like the United Nations, is down across the board.

The rise of the Internet and social media has fragmented the sources of news that people turn to. In the early days of television, there were three: ABC, CBS, and NBS. That’s because they had enough money to license the airspace from the FCC. A handful of rich people could send a unified message to millions of people. They controlled the message. They were unified in their worldview: liberal, pro-big-government, anti-free-market.

Yet now, with news sites popping up all over the internet, their message is being undermined. Conservative news sites undermine their stories and perspective. In response, they scream “fake news!” Every time they do, Trump sends a tweet to his 27 million followers reminding them all that the liberal New York Times is failing.

THE END OF MASS MEDIA

Spengler was ahead of his time.

In the 1984 film Ghostbusters, their recently hired secretary, Janine, tries to strike up a conversation with brainiac Egon. She tells him he must like to read a lot. His response is classic:

“The Establishment” refers to the elite group of people that holds power in a nation, or even in the world. We all know Washington and politics are dominated by the intellectual elite and wealthy. The Framers built in a provision that the President must be paid a salary because, if the job came without compensation, perhaps only the richest men in the world would take the job. That would forever keep it beyond the grasp of the little man.

But, given the way Washington is run in our modern era, we all know that only very privileged people even have a chance at becoming President. Harvard, Yale, Princeton, Columbia, Stanford — these are the names of the colleges and universities that have graduated the most presidents. Most people will never attend any of them.

But since the elite are few, and the masses are many, they need a mechanism for getting their message out. Until the rise of the Internet, mass media has been a good way to do that. J.P. Morgan was one of the richest men in America in the 1890s thanks to his banking empire. When The New York Times almost went bankrupt in 1896, Morgan became the financier of its replacement owner, Adolph Ochs, who purchased the paper.

It was Ochs who added the Times‘ masthead: “All the News That’s Fit to Print.” He grew its readership from 9,000 in 1896 to 780,000 by the 1920s. And behind it all was J.P. Morgan, who was also in control of General Electric, Westinghouse, and had been pivotal in conspiring to get the Federal Reserve Act drafted and passed in 1913.

Now, trust in mass media is at an all-time low. It’s never coming back. For people who look to politics and government for salvation, Trump’s presidency has been a huge blow to their faith. The little people, who outnumber the Establishment, sent a message to the liberal elite in the election of 2016.

But there’s a silver lining.

Politics is not the root of salvation. It cannot bring healing. Bills and legislative acts of Congress cannot bring diverse groups of people together and magically resolve the sources of conflict between them. Just passing a law saying that men can be women doesn’t actually make it so.

And people know this.

Not only that, but more people are beginning to figure this out. A recent survey conducted among over 2,000 Americans proves it. It reveals an underlying faith that is the source of true hope.

Where can people turn for solutions to moral problems? Evolution offers no legitimate hope. Everything’s random. There is no such thing as ethics. It’s just something we made up. It varies with the times and cultures. Evolution carries nothing but a message of hopelessness for the 81% of Americans who have spotted the moral decline in America.

The big news is that Bible skeptics are on the decline. They were at an all-time high in 2016, which is when most of America, especially the members of the mass media, believed Hillary Clinton was going to win the Presidency. At that time 22% of Americans were skeptical of the Bible. It appears that number has peaked, and is now on the decline. 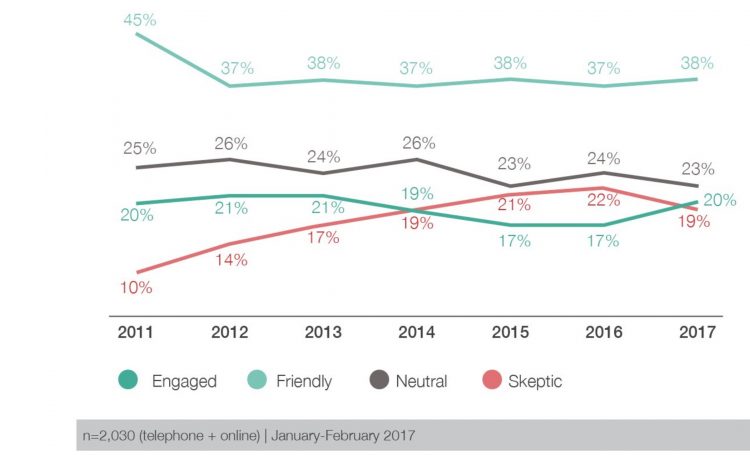 As people lose faith in one god, they look to another god. As Americans lose faith in the Messianic State, Christians need to be there ready to tell them about Christ, the true Messiah who will never fail them. Their attitudes towards the Bible are softening. This is what times of crisis do to people: prepare them to receive the Good News.

Is the Federal Reserve exercising its "nuclear option" and initiating its exit strategy?

As faith in the Establishment wanes, Bible skeptics are declining