I do solemnly swear (or affirm) that I will support and defend the Constitution of the United States against all enemies, foreign and domestic; that I will bear true faith and allegiance to the same; that I take this obligation freely, without any mental reservation or purpose of evasion; and that I will well and faithfully discharge the duties of the office on which I am about to enter: So help me God.”

How does a person swear to something that he doesn’t know what it says? Who would sign a contract without first reading it?

I suspect that many members of Congress either don’t know what the Constitution says or they don’t care, otherwise, we wouldn’t have so many unconstitutional programs. Do you know that the word “education” is not found in the Constitution? This means governing education is not one of the enumerated powers of the Federal government. The same can be said for healthcare and Social Security.

Most members of Congress don’t broadcast their ignorance of the Constitution, but Swalwell did. Here’s what he tweeted:

“Do you know how many times the word ‘Woman’ is mentioned in the Constitution? Zero. That is unacceptable. Women must be equally represented and equally protected. #ERANow,” Rep. Swalwell tweeted Tuesday night.

Notice the number of retweets and likes. These people, including Swalwell, should not be permitted to vote.

Why is what Swalwell wrote so wrong? Because the words “man” and “men” don’t appear in the Constitution. Even the 19th Amendment, that gave women the right to vote, doesn’t use the words men or women:

The right of citizens of the United States to vote shall not be denied or abridged by the United States or by any State on account of sex. Congress shall have power to enforce this article by appropriate legislation.

Swalwell should have known this. In 2003, he completed his bachelor’s degree in government and politics at Maryland. He enrolled at the University of Maryland School of Law and earned his Juris Doctor in 2006. How was this possible? Don’t lawyers study the Constitution?

Notice that it says “sex” and not “gender.”

You may have seen this: 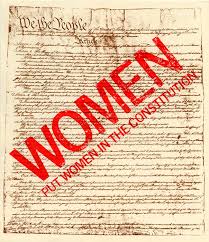 The Constitution and its amendments mention “person” or “persons” 28 times and refer to “citizen” or “citizens” 11 times.

Did you know that the text of the Equal Rights Amendment (ERA) doesn’t include the words woman or “women”?

In addition, the Constitution does not use the word “race,” “slavery,” “slave,” “white,” “black.” Such omissions are curious since there are many who view the Constitution as a racist and sexist document.

Actually, the word “slavery” did not enter the Constitution until after the Civil War in the 13th Amendment.

Section 1. Neither slavery nor involuntary servitude, except as a punishment for crime whereof the party shall have been duly convicted, shall exist within the United States, or any place subject to their jurisdiction.

Section 2. Congress shall have power to enforce this article by appropriate legislation.

Even Wikipedia gets it right:

The Three-Fifths Compromise was a compromise reached among state delegates during the 1787 United States Constitutional Convention. Whether, and if so, how, slaves would be counted when determining a state’s total population for legislative representation and taxing purposes was important, as this population number would then be used to determine the number of seats that the state would have in the United States House of Representatives for the next ten years. The compromise solution was to count three out of every five slaves as a person for this purpose. Its effect was to give the southern states a third more seats in Congress and a third more electoral votes than if slaves had been ignored, but fewer than if slaves and free people had been counted equally. The compromise was proposed by delegate James Wilson and seconded by Charles Pinckney on June 11, 1787.

Was it right for the Northern delegates to agree to this compromise? We will never know. Second guessing the actions of men who lived two-hundred years ago is a waste of time and energy. Distorting the facts of history to gain political points is reprehensible.

Stop Complaining About Public Schools and Get Your Children Out!

The Bible Warns About 'Savage Wolves' among the Sheep