Should the Democrat Party be Listed as a ‘Hate Group’?

The Democrats throw around the word “hate” like they do “racism.” It’s the only way they know how to argue. If they can’t make the race card stick, there’s always the “hate” card to play. It covers a multitude of situations. It’s like switching from Global Warming to Climate Change. Any time there’s a change in a weather event, it’s due to the climate changing. It’s a political tautology.

The Southern Poverty Law Center (SPLC), a non-paid advertising arm for the Democrat Party, has created a multi-million-dollar industry with its lists of “haters” and “hate groups” while ignoring real hate rhetoric and violence among their own kind. For example, James T. Hodgkinson who seriously wounded Republican Congressman Steve Scalise and several others at a baseball practice early Wednesday in Alexandria, Virginia, was a fan of the Southern Poverty Law Center, and Floyd Corkins who in 2013 “stopped by Chick-fil-A to pick up 15 sandwiches and “planned to smear in the dying faces of staffers he expected to kill at the Family Research Council in Washington… At the time of the shooting, Corkins lived with his parents in Herndon, Virginia, and volunteered at a Washington center for the lesbian, gay, bisexual and transgender community.”

The Virginia shooter was a left-wing hater who fed off the rhetoric of the Democrat Party and spewed a great deal of his own. His Facebook page was full of it, but the leftists at Facebook ignored it. They were too busy blocking conservative posts. 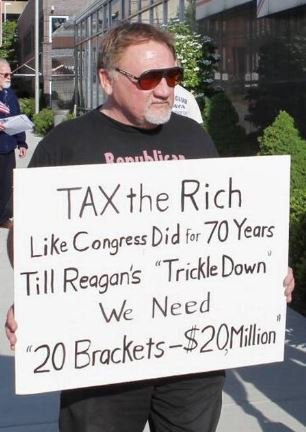 James Hodgkinson was envious. He wanted the rich taxed as his many letters to the editor at the Belleville News-Democrat reveal. “Tax the rich” is a call for wealth confiscation. If it’s OK to elect people who will steal money from other people, then it should be OK to kill people to make it possible for more political thieves to get elected.

What do we get from the Left? MSNBC’s “MTP Daily” host Chuck Todd said, “Folks, some want to blame the left or the right or us in the media. But here’s who it seems too many folks don’t want to blame themselves. We are all to blame. This toxic stew that passes for political discourse seems beyond repair in the current moment. Just look at social media.”

“We’re all to blame”? Actually, the shooter is to blame, but since Democrats have been talking about toxic rhetoric, it’s time they take responsibility for some of their own. How many Democrats came out publicly and denounced Kathy Griffin’s sick decapitation “joke”?

Tim Graham Graham, executive editor of NewsBusters, “spoke with Breitbart News Daily SiriusXM host Raheem Kassam on Thursday regarding the media’s reaction to the shooting commented on MSNBC anchor Andrea Mitchell’s reporting on the shooting by saying, ‘In 2011, when Congresswoman Gabriel Giffords was shot, they jumped on the idea that this was the Tea Party. In Denver, they jumped on the notion that the shooter was the Tea Party. In both cases, they didn’t have anything. Here, in this case, it’s quite clear.’” (Breitbart)

In fact, the New York Times brought up the Gabriel Giffords shooting in a recent article trying to blame Sarah Palin. The Times has since issued an online correction. Palin is considering suing the paper for libel.

Where is the outcry over the assassination of a Trump-like Roman ruler in the New York Shakespeare in the Park play “Julius Caesar” that has received $30 million dollars stolen from taxpayers? Delta Airlines and Bank of America had the good sense to pull their financial support. American Express has not. The play will go on.

Breitbart lists 15 examples of know Democrat supporters who are guilty of rhetorical violence that has gotten little pushback from the Democrats.

2. Madonna – “I’ve thought a lot about blowing up the White House.”

3. Snoop Dogg “Shoots” Trump in the Head in Music Video

6. Shakespeare in the Park Stabs ‘Trump’ to Death in Performance of ‘Julius Caesar’

9. Actress Lea DeLaria Threatens to ‘Take Out’ Republicans and Independents with Baseball Bat after Trump Win

13. Larry Wilmore Jokes About Suffocating Trump with ‘Pillow They Used to Kill Scalia’

The Huffington Post pulled an article by Jason Fuller that was posted on June 10th that advocated the “execution” of Donald Trump:

Fuller’s piece contained rhetoric and imagery that seems tasteless, particularly after Wednesday’s events. Fuller boldly declares in the title that “Trump must be prosecuted — if convicted in a court of law — executed.” Fuller doesn’t stop there, however, as he insists that “impeachment isn’t enough” to “drain the swamp,” and to do so means doling out the “ultimate punishment [execution]” in order to fully restore the moral compass of the U.S. (Daily Caller)

While the Huffington Post removed the article, it’s been web cached here.

John Griffin, a professor at the Art Institute of Washington, called for Republicans to be “lined up and shot” for voting to pass the American Health Care Act (AHCA) in the House of Representatives. The image comes by way of Campus Reform:

Ann Coulter says what few people are willing to say:

The explosion of violence against conservatives across the country is being intentionally ginned up by Democrats, reporters, TV hosts, late-night comedians and celebrities, who compete with one another to come up with the most vile epithets for Trump and his supporters.

They go right up to the line, trying not to cross it, by, for example, vamping with a realistic photo of a decapitated Trump or calling the president a “piece of s—” while hosting a show on CNN.

The media are orchestrating a bloodless coup, but they’re perfectly content to have their low-IQ shock troops pursue a bloody coup.

This week, one of the left’s foot soldiers gunned down Republican members of Congress and their staff while they were playing baseball in Virginia. Democratic Socialist James Hodgkinson was prevented from committing a mass murder only by the happenstance of a member of the Republican leadership being there, along with his 24-hour Capitol Police protection.

Some might argue that the examples don’t come directly from the Democrat Party. This is true. But we know that these aren’t Republicans saying and doing these things. Even John McCain isn’t that brazen. These haters are Democrat surrogates. They are like Michael Corleone’s “buffers.” They do the dirty work so the Democrats can say, “Not us. We’re not responsible.”

Last Man Standing to Return? The viewers are being heard...

Should the Democrat Party be Listed as a ‘Hate Group’?