The Middle East will never be made right by force. Competing Islamic groups often gain the trust of the United States only to turn on their benefactors once their sworn Islamic enemies are vanquished with the help of the US military.

It happened when our embassy in Iraq was overrun by Iranian Muslims. Who helped to let them in past multiple security measures? The Iraqis, many of whom side with Iran over against the United States who they see as occupiers.

What doesn’t help is American intervention to “fix” what’s wrong with nations. The underlying worldview needs to be fixed. That can’t take place by force or even education. It’s first a problem of the heart. The United States got its start in the tried and true furnace of a Christian worldview even though many people did not embrace Jesus Christ as their needed redeemer.

The moral center of Christianity gave our nation its life.

Islam is a worldview masquerading as a religion intent on world domination through fear, terror, and the ballot box. The talk from both ends of the political spectrum is that “democracy” will cure the ills of Iraq, Iran, Egypt, and the surrounding Muslim nations. What if the protesting people of Egypt decide they want a Muslim Brotherhood-style social and political system whose goal is to defeat the infidel West and impose Sharia law on Muslims and non-Muslims worldwide and they choose violence to accomplish the goal and the masses remain silent because they are afraid of reprisals? 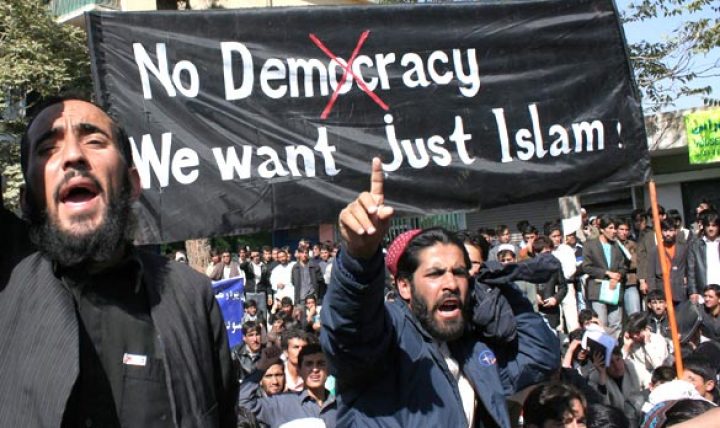 Please don’t misunderstand what I am saying. There are democratic elements in our constitutional system, but these at one time were balanced with the belief in an objective law that the majority of people understood and followed in a self-government way, courts bound by an external law, and elected representatives who took an oath to uphold that law. Western-style democratic principles are built on the remnants of a Christian moral order that is fading away. Self-government under God’s government tempered the potential harmful effects of a pure democracy that could be manipulated by evil men.

Attempts to export our political form without the worldview that gave it its heart will lead to unintended consequences. Democracy in the Mideast will only lead to the imposition of the prevailing worldview which is anti-Christian and anti-Western.

Being anti-Western is not an all-bad thing. Just look at some of the goings-on at America’s national religious festival, the Super Bowl, where less than family-friendly commercials pour forth from our televisions every ten minutes for the whole world to see. This says nothing about the legalization and promotion of homosexuality and the bizarre notion that two people of the same sex can get married and adopt children. See Dinesh D’Souza’s The Enemy at Home for a discussion of what makes many non-terrorist Muslims anti-Western. There will be enough people in Egypt, influenced by Islamo-fascist terrorists who have their own special kind of death wish. They would love to get the chance to vote in a “democratic election” so they can see their dream of an Islamic world realized.

Holland used to have a Christian moral base. Over time, the government adopted a form of religious pluralism, giving equal standing, first, to all Christian denominations, then to religions in general, and finally to every worldview imaginable. Holland has lost its Christian worldview foundation. It has become a haven for drugs, prostitution, and euthanasia—all legal! Its liberal immigration policies are beginning to worry people, especially after the murder of Dutch filmmaker and outspoken critic of Islamic extremism Theo van Gogh. Tens of thousands of Dutch citizens have moved elsewhere, mostly to New Zealand, Australia, and Canada. This has led to a higher concentration of Muslims.

Muslims make up ten percent of the population. If population trends continue, Muslims could become a viable political force and remake Holland into a Muslim nation in the lifetime of our grandchildren. Holland’s religious pluralism could be its downfall. Is it too late? The rest of Europe is in a similar demographic predicament.

There is so much talk about democracy that few people have considered what our founders have said about this fictional ideal. Consider these comments about democracy.

Timing Is Everything in the Olivet Discourse