There has been a great deal of outrage when Roseanne Barr’s compared Valerie Jarrett compared here to Helena Bonham Carter’s character Ari in the 2001 remake of Planet of the Apes. Many people might not realize that evolutionists believe that humans and chimpanzees are very close DNA relatives.

Scientists have sequenced the genome of the chimpanzee and found that humans are 96 percent similar to the great ape species.

“Darwin wasn’t just provocative in saying that we descend from the apes—he didn’t go far enough,” said Frans de Waal, a primate scientist at Emory University in Atlanta, Georgia. “We are apes in every way, from our long arms and tailless bodies to our habits and temperament.” (National Geographic News) 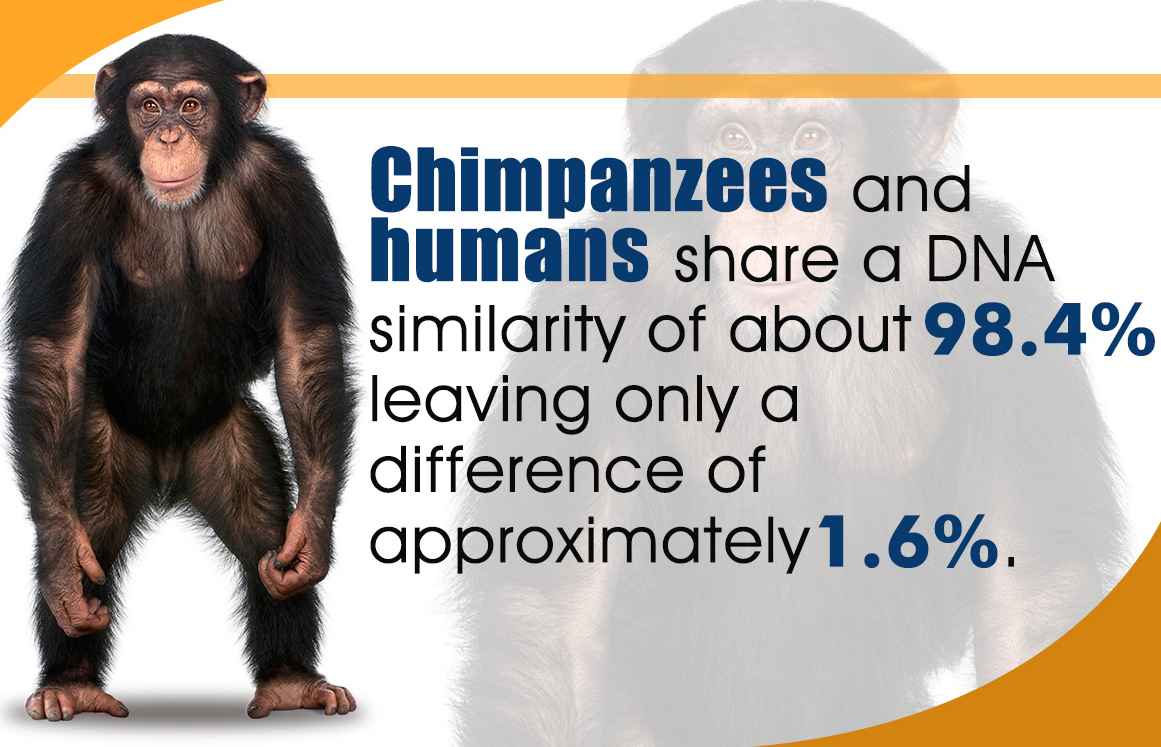 This brings me to an advertisement for a television special that was broadcast on TNT (Turner Network Television) – “The Trials of Life.” The full-page advertisement showed a composite picture of six animals, one of which was the bald eagle, with the following caption: “Discover how similar the face of nature is to yours. The way you love, the way you fight, the way you grow, all have their roots in the kingdom we all live in: the animal kingdom.” The implication here is obvious: Humans are only an evolutionary step away from other animals.

Sometime later I came across the introductory chapter in a book on mammals distributed by Time/Life Books. On the left-hand page was a 15-month-old baby with his arm outstretched facing a chimpanzee on the right-hand page with its arm outstretched, mocking Michelangelo’s depiction of the creation of man–God’s arm and hand outstretched touching the hand of Adam. The following bit of nonsense appeared next to the picture of the human “animal”:

To the untrained eye, this 15-month-old baby human and 2-year-old chimp look quite different. Yet chimps are probably our closest living relatives. They share 99 percent of our genes. Their body structure is startlingly similar to ours. Their behavior, too, is full of “human” traits. A chimp can solve problems, talk in sign language, and make and use tools. As our knowledge widens, it seems that in many ways humans are not as distinctive among mammals as we once thought.1

Only the biased eye trained in the dogma of Darwinian evolution can see the supposed similarities. While chimpanzees may be able to communicate in some form of sign language, taught to them by humans, this is no evidence of humanness. Mr. Ed could count, but this didn’t make him a human relative. Let me know when chimps set up schools and hospitals, plant crops, build roads and houses, and stop killing and eating their neighbors.

Journalist and author Gwynne Dyer claims that “The apes are our brothers–at least our first cousins.”2 If this is so, comparing someone to an ape is scientifically accurate.

It might not be an accident that more people today are beginning to follow the logic of what Darwinists have been telling them. They’re animals and it’s all about survival of the fittest. The Darwinists have made it their life’s mission to ensure that young people are made to believe that they are animals:

Despite the protests of creationists and their intellectual allies, and the occasional attempts by American state school boards to expunge evolution from the curriculum, science has long taught that human beings are just another kind of animal, but most of the time this seems like a technicality.3

Of course, today’s Darwinists will insist that the human animal is not a descendant of chimpanzees and apes but that the human animal and their closet DNA relatives diverged at some point. The late evolutionary paleontologist of Harvard University, George Gaylord Simpson, disapproved of the attempt to dismiss the obvious:

On this subject, by the way, there has been way too much pussyfooting. Apologists emphasize that man cannot be the descendant of any living ape—a statement that is obvious to the verge of imbecility—and go on to state or imply that man is not really descended from an ape or monkey at all, but from an earlier common ancestor. In fact, that earlier ancestor would certainly be called an ape or monkey in popular speech by anyone who saw it. Since the terms ape and monkey are defined by popular usage, man’s ancestors were apes or monkeys (or successively both). It is pusillanimous [cowardly] if not dishonest for an informed investigator to say otherwise4

It’s no use, therefore, for Darwinists to claim that human animals did not evolve from monkeys and apes, thus absolving the theory of evolution to be animalistic, because, as Simpson concludes, “that earlier ancestor would certainly be called an ape or monkey in popular speech by anyone who saw it.”

In fact, it’s worse than what Simpson concludes. The human animal has evolved from pond scum!

The biology text used in the Dayton school system when John Scopes was put on trial for teaching evolution in 1925 was George William Hunter’s A Civic Biology (1914), the best-selling text at the time. Hunter’s work was “heavily laced with the scientific racism of the day. According to Hunter, ‘simple life forms of life on earth slowly and gradually gave rise to those more complex.’ Humans appeared as a progressive result of this evolutionary process, with the Caucasian race being ‘finally, the highest type of all.'”5

Consider the following from Charles Darwin’s The Descent of Man

At some future period … the civilized races of man will almost certainly exterminate and replace throughout the world the savage races. At the same time the anthropomorphous [having human traists] apes … will no doubt be exterminated. The break will then be rendered wider, for it will intervene between man in a more civilized state, as we may hope … the Caucasian, and some ape as low as a baboon, instead of as at present between the negro or Australian and the gorilla.6

Racism has been with mankind since the dawn of sin. We cannot claim, therefore, that evolution gave rise to racism.7 Evolution only made the practice respectable because it justified racial attitudes and practices on the basis of “science.” Darwin’s defenders don’t like to talk about Darwinism’s dirty little secret. “Darwin’s racial and sexual views permeated his discussion of the origin of species and especially of the descent of man. His contemporaries were shocked by the notion that human beings had evolved from primates.”8

Given all the evidence, scientists — today’s priests — are the ones who have been comparing people with apes, chimps, and lesser species. Given enough time, there’s a certain percentage of people who will believe the “science” enough to act on it.