Liberals do not like much of what’s in the Constitution. It’s too limiting. The portions they do like, they reinterpret. How many times have you heard a liberal quote the actual words of the First Amendment when the issue of religion comes up? Mostly we hear that the Constitution requires a “separation between church and state” when the phrase isn’t found anywhere in the Constitution and there is no evidence that the authors of the Constitution separated religion from government.

Someone who opposes abortion or homosexuality and calls for laws to outlaw these behaviors are said to violate the First Amendment since these prohibitions are religious in nature. So are prohibitions against rape, murder, kidnapping, stealing, lying, tripping blind people, moving boundary markers, and many other actions.

Senate Democrats said last week that the Supreme Court had stretched the First Amendment too far on the issue of campaign finances and vowed to hold a vote to amend the Constitution and undo a number of landmark decisions.

Democrat Senator Chuck  Schumer from New York and chairman of the Rules Committee, said he will push a constitutional amendment to the full floor later this year that would give Congress the power to impose strict limits on campaign finance.

Chuck Schumer turned the First Amendment on its head with this goofy argument:

So by adding restrictions on free speech we are honoring the First Amendment. I wonder if the media would go along with this doubletalk since freedom of the press is also protected.

Schumer’s reimaging of the First Amendment wouldn’t do a thing to campaign contributions given to the Democrat Party by unions. 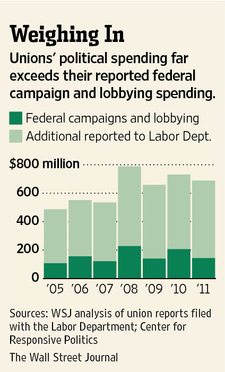 From 2005 through 2008, unions spent $4.4 billion on elections with close to 95 percent of the money going to Democrat candidates.

This isn’t all. In addition to the union money that goes to the Democrats, there is an additional factor that only recently has been calculated:

“We have always known that much of [unions’] influence comes from their political mobilization, but we have never been able to put a number on it,” said Bob Biersack, a longtime FEC official who is now with the Center for Responsive Politics. “They are a human force in the political process, but a lot of that falls outside the kind of spending that needs to be disclosed to the FEC.”

It’s the workers the unions put on the ground to get Democrats elected that do not show up on the bottom line of campaign contributions. Schumer’s new First Amendment wouldn’t do a thing about it.

Chuck Schumer knows all of this. The only counter to the huge impact unions have on elections is private campaign contributions, the liberty of people to participate without union thuggery.

The reason there’s so much money given to candidates is for influence. If our government actually followed the Constitution, there would be that much less influence to buy.