A seminary professor from what would be considered a conservative Christian college posted the following on Facebook in response to a Christianity Today article that supports the removal of Pres. Trump from office:

Christianity Today has just called for Trump’s removal from office. They are calling us to remember who we are and whom we serve. Amen.

Like clockwork, media outlets referenced the CT article written by the magazine’s editor, including The New York Times and Washington Post. Any other time they would have ignored a Christian publication, but because it fits their agenda, they want the world to see it.

The article states that “it’s time to call a spade a spade,” so that’s what I’m doing.

The CT article notes that Billy Graham was one of the founders of the magazine. Here is Franklin Graham’s response to the article from his Facebook page:

He went on to say that since “they invoked my father’s name (I suppose to try to bring legitimacy to their statements), I feel it is important for me to respond. Yes, my father Billy Graham founded Christianity Today; but no, he would not agree with their opinion piece. In fact, he would be very disappointed.”

A former president at Westminster Theological Seminary commented, “I am more positively impressed by CT than ever!!” Let that sink in.

What crimes did Pres. Did Trump commit? What factual adjudicated actions has he taken that meet the standards of biblical law and the Constitution that rise to the level of an impeachable crime? The CT article mentions his comments on Twitter.

His Twitter feed alone—with its habitual string of mischaracterizations, lies, and slanders—is a near perfect example of a human being who is morally lost and confused. 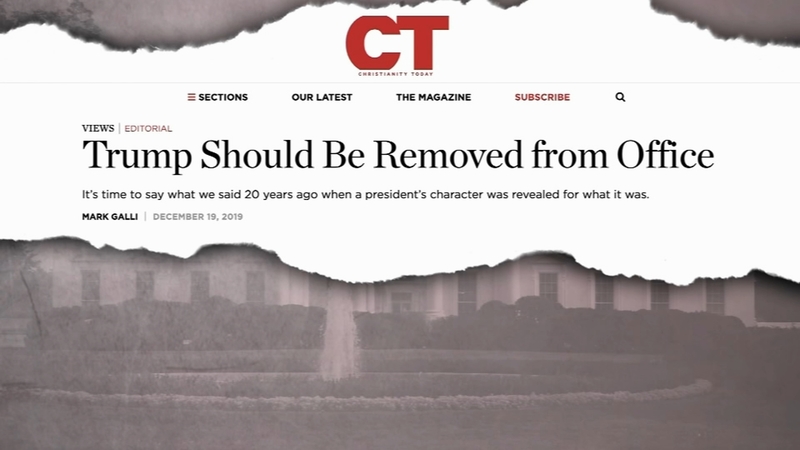 Really? This is an impeachable offense as compared to John Adams who under his administration arrested, fined, and jailed journalists (the 1798 Sedition Act signed into law by Adams), Abraham Lincoln who suspended habeas corpus, shut down newspapers during the Civil War and arrested and jailed journalists, Woodrow Wilson who resegregated the government, and FDR who interned Japanese Americans in camps during World War II? Let’s not forget Pres. Obama’s IRS scandal where the government agency targeted conservative groups.

Has the author of the CT article ever read the comments of some of our past presidents and their supporters long before there was electronic communication? Trump’s Twitter comments, many of which I don’t like, pale in comparison.

How many of you remember the “Daisy Ad” (formally titled “Peace, Little Girl”) during the 1964 presidential election?

Lyndon Johnson beat Barry Goldwater in a landslide. It doesn’t make Pres. Trump right, but Twitter comments are not impeachable offenses. If people believe he is unfit for office for any reason, then vote him out of office in November 2020. It’s that simple. This present impeachment farce is a partisan tirade, something the author of the CT article admits. Do you remember U.S. Rep. Rashida Tlaib (D-Mich.) who declared on the day she was sworn into office saying, “We’re gonna impeach the motherf***er!“?

But this is what really caught my attention in the CT article:

Let’s grant this to the president: The Democrats have had it out for him from day one, and therefore nearly everything they do is under a cloud of partisan suspicion. This has led many to suspect not only motives but facts in these recent impeachment hearings. And, no, Mr. Trump did not have a serious opportunity to offer his side of the story in the House hearings on impeachment.

But the facts in this instance are unambiguous: The president of the United States attempted to use his political power to coerce a foreign leader to harass and discredit one of the president’s political opponents. That is not only a violation of the Constitution; more importantly, it is profoundly immoral.

Did you catch the two statements in bold?

Mr. Trump did not have a serious opportunity to offer his side of the story in the House hearings on impeachment. But the facts in this instance are unambiguous.

But for Mark Galli, the editor-in-chief of Christianity Today who penned the article and a prominent seminary and now college professor, Pres. Trump still should be removed from office!

Really? If a person is not given the opportunity to defend himself, then the facts are by definition legally and constitutionally ambiguous and open to question. Who among us, even the most ardent critics of President Trump, would favor being convicted without having the opportunity to assess the evidence offered by the prosecution and cross-examine witnesses?

A publication like CT and a professor of Old Testament who has written for the Dictionary of the Old Testament: Wisdom, Poetry and Writings and published several commentaries on the biblical book of Proverbs certainly are aware of what the Bible requires when a charge is made:

The first to plead his case seems just,
until another comes and cross examines him (Prov. 18:17).

I don’t have copies of Tremper Longman’s commentaries on Proverbs, but here’s a standard understanding of Proverbs 18:17 where he is cited:

In Proverbs 18:17, the one who first states a case (the defendant) seems right, until the other (the plaintiff) or accuser comes and cross-examines. Indeed, the verse shows that the plaintiff argues his case and the defendant is given the opportunity to defend himself. The fact that both parties are given opportunities to argue their case enables the judge to cross examine and sift the evidence in order to arrive at a fair verdict; thereby doing justice. The proverb underscores the equality of disputants. As Whybray rightly notes, ‘the verse is addressed to judges, warning them against making premature judgments before all the evidence and arguments have been heard 1994c: 271; Longman, 2006:358). In addition, ‘a firsthand witness to a crime had a legal obligation to testify in court’ (Lev. 5:1-6; Prov. 29:24)….1

The Bible requires two or three agreeing witnesses in a legal case:

Not one of the witnesses called to testify against Pres. Trump were eyewitnesses to anything. They were opinion witnesses. There were many contrary opinion witnesses if they had been permitted by the Democrats to be called by the Republicans. They are all over the internet and on news networks. Did the editor of CT read their opinions?

The following is from Article III of the Constitution that reflects biblical law:

Treason against the United States, shall consist only in levying war against them, or in adhering to their enemies, giving them aid and comfort. No person shall be convicted of treason unless on the testimony of two witnesses to the same overt act, or on confession in open court.

This requirement alone should have been enough to dismiss the case against Pres. Trump.

The item that started this impeachment inquiry (there have been other attempts by the Democrats from day one of his presidency, a point made by the CT author) was a phone call to the leader of a foreign nation. That phone call is evidence. Trump released the transcript of the phone call. There is nothing in that phone call that rises to the level of an impeachable offense.

The author of the article goes on to write:

To the many evangelicals who continue to support Mr. Trump in spite of his blackened moral record, we might say this: Remember who you are and whom you serve. Consider how your justification of Mr. Trump influences your witness to your Lord and Savior.

On the biblical requirements related to a fair hearing and adjudication related to impeachment and any crime, the above author is proposing actions that are contrary to the Bible and the Constitution. Pres. Trump has not committed an “immoral act” while in office. Policy disagreements are not immoral acts. Yes, he has sinned in his past. We all have. King David, God’s choice for king of Israel, was an adulterer and an accomplice to murder while serving as king, and yet he was God’s anointed (1 Sam. 16).

Trump’s evangelical supporters have pointed to his Supreme Court nominees, his defense of religious liberty, and his stewardship of the economy, among other things, as achievements that justify their support of the president.

There are many more achievements. Check out the article that lists 289 of Pres. Trump’s accomplishments in 20 months.

This says nothing about the Democrats and their objectively insane and immoral economic policies. Trump nails it with this comment from Twitter, naturally:

A far-left magazine, or very “progressive,” as some would call it, which has been doing poorly and hasn’t been involved with the Billy Graham family for many years, Christianity Today, knows nothing about reading a perfect transcript of a routine phone call and would rather have a Radical Left nonbeliever, who wants to take your religion & your guns, than Donald Trump as your President. No President has done more for the Evangelical community, and it’s not even close.

Just imagine if this was said about a Democratic President, maybe Barack Obama or Bill Clinton: Talking to Congressman James Clyburn on Thursday, CNN New Day co-host John Berman had NO response when the Democrat said of a Senate impeachment trial for Donald Trump: “Let’s give him a fair trial and hang him.”

Mike Ford has written, “The Democrat party of infanticide and childhood genital mutilation hopes to convince us rubes in flyover country, that they are ‘prayerfully’ considering the impeachment of President Donald J. Trump.” Well, it seems, there are rubes in high places.

I can’t wait to see an article from Christianity Today exposing the evil of the Democrat Party and the editorial staff’s recommendations for a solution. I won’t hold my breath.

Christians and the Moral Case Against Pres. Trump