A group of atheists wants the courts to declare the phrase “In God We Trust” unconstitutional and removed from our nation’s currency. These atheists are the secular version of the Islamic State who go about destroying anything related to competing religions. And atheism is a religion. “Satellite images confirm that the oldest Christian monastery in Iraq has been destroyed by the jihadist group Islamic State (IS).”

The group of 41 plaintiffs is led by Sacramento attorney Michael Newdow who is no stranger to suing the government over issues related to religion. They filed a federal lawsuit  in Akron, Ohio, “arguing the expression violates the separation of church and state.”

“The phrase ‘In God We Trust’ was made the official U.S. motto in 1956, one year after the phrase ‘under God’ was incorporated into the Pledge of Allegiance.” (H/T: CrisisBoom)

Let’s get some preliminaries out of the way. First, this is not a “church/state” issue. The church is not involved, and even if it were involved there is no constitutional provision that mandates that it can’t be involved

Third, the existence and acknowledgment of God protects atheists because it stops the State from becoming a law unto itself. If that happens, there is nothing to stop the State from becoming a tyrant and enforcing its own mandates on everyone regardless of creed or lack thereof. While the Bible declares an atheist to be a “fool,” there is no negative civil sanction imposed on atheists.

Do we have any proof that the founders espoused a view of “nonreligion” as Justice Scalia described what Europe has adopted? Look how that’s working out that Islam will soon be the majority religion that will wipe out all dissenters.

Fourth, there is a large body of evidence that our founders – even the most skeptical – did not adopt a “nonreligion” worldview:

But let’s be honest, in terms of America’s laws and policies, God has been rejected as the “Supreme Judge of the world” as the Declaration of Independence describes it. And that’s a problem. Yes, we can find examples of government pronouncements that we are “one nation under God” and “In God We Trust,” but is it really so? Does America really trust God?

America trusts its own version of god, and in most cases it’s the State. Even people who believe in God have become willing wards of the State: “Where your treasure is, there your heart will be also” (Matt. 6:21.) The majority of Americans prefer free stuff from the State, money that has been stolen from some citizens and given to others.

Recently, the Ohio Supreme Court ruled 4-3 supporting the “firing of an Ohio science teacher for insubordination because he refused to remove ‘religious materials’ from his classroom, including posters of President George Bush and Colin Powell praying” even though the Constitution states that it was drafted “in the Year of our Lord” 1787. Is the Constitution unconstitutional? 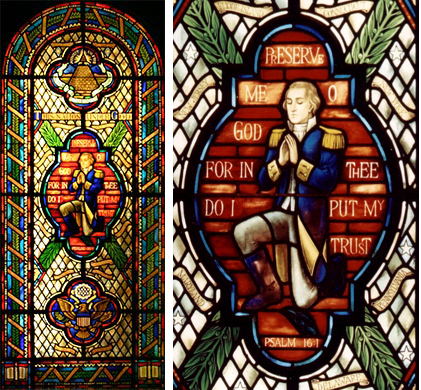 How does the Ohio Supreme Court decision square with the Congressional Prayer Room’s stained glass window that shows George Washington kneeling in prayer? “Surrounding him are the words from Psalm 16:1, ‘Preserve me, O God, for in thee do I put my trust.’ Above him are the words from Lincoln’s Gettysburg address: ‘This Nation Under God.’”

Not only are we not a nation under God’s favor, but we are a nation that has made it a point to disavow the religious past that made America great. We’re doing this to our own peril. “Do not be deceived, God is not mocked; for whatever a man sows, this he will also reap” (Gal. 6:7).

It's Time to Register Journalists and Regulate Freedom of the Press