Apple CEO Does Business With Countries that Execute Homosexuals

Let’s see if Tim Cook and Apple begin to divest from companies in China and nations where homosexuals are executed take place.

The Gateway Pundit reports: “Cook may believe Indiana’s new law is very dangerous towards gays… But it’s not as dangerous as the several countries Apple does business with where they execute gays.”

Here are four of the ten countries that Apple does business with and where homosexuals are executed:

“Even as Cook denounces Indiana based on a misinterpretation of its new law, he courts the United Arab Emirates (UAE)—a federation where homosexuality is outlawed, and can be punishable by death.

“The U.S. State Department in a 2013 report on the UAE cited ‘citizens’ inability to change their government; limitations on citizens’ civil liberties (including the freedoms of speech, press, assembly, association, and internet use); and arbitrary arrests, incommunicado detentions, and lengthy pretrial detentions.’”

Let’s see if Cook and Apple will put principle over profits and stop all trade with these nations.

This is from Human Rights Watch about China where many Apple products are made:

“Rapid socio-economic change in China has been accompanied by relaxation of some restrictions on basic rights, but the government remains an authoritarian one-party state. It places arbitrary curbs on expression, association, assembly, and religion; prohibits independent labor unions and human rights organizations; and maintains Party control over all judicial institutions.”

Apple and Cook like China because it “places arbitrary curbs on expression, association, assembly, and religion,” just like he wants to do in the United States while ignoring China’s abuses. He can be a hypocrite because China does not have a free press, and the liberal media will not bring up the blatant hypocrisy.

George Will gets it right: “There’s nothing more tiresome in modern American life than the indignation sweepstakes we get in all the time to see who can be most angry about this and that. Tim Cook … thinks Indiana is a horrible place. He opened marketing and retailing operations in Saudi Arabia two months before a man was sentenced to 450 lashes for being gay. The selective indignation is itself wonderful.”

Let’s see Cook declare that he’s “proud to be gay” in Saudi Arabia.

Read more: “Apple CEO Tim Cook Is a Bigot Who Does Not Believe in Religious Freedom.”

Without China, Apple products would be much more expensive than they are. Cook doesn’t need Indiana like he needs China. Omalik writes:

“I finally had a chance to catch up on Apple’s latest keynote, which saw CEO Tim Cook announce some additional details about Apple Watch and of course, its pricing. The company also announced a new kind of Macbook — pretty amazing actually — and some other newish offerings such as HBO Now on Apple TV. As I sat and watched through the keynote video, one thing which became pretty obvious — Apple’s number one focus going forward is China.”

Apple and Cook aren’t the only hypocrites that denounced Indiana’s law. You can add Eli Lilly, SalesForce, and the National Basketball Association. The NBA plans to play games in China this fall.

Marc Benioff of SalesForce must have left out “and China” from his Twitter comment: “Today we are cancelling all programs that require our customers/employees to travel to Indiana to face discrimination.”

I wonder if SalesForce will do the same for the other 19 states that have a similar law? Even with all the furor, Arkansas just passed a similar law. That makes 20. 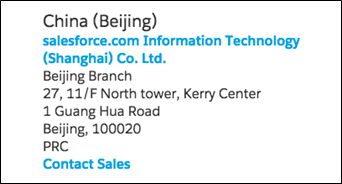 Apple CEO Does Business With Countries that Execute Homosexuals