You can’t say a word against Muslim extremists who are killing Christians by the dozens every day in many parts of the world. You can’t refuse to bake a cake for a same-sex wedding without being dragged into court.

But it’s OK to refuse Chick-fil-A from opening one of its always-in-demand restaurants at the San Antonio airport.

It’s also OK for liberals to “pray” (Oh the irony) for Liberty University’s basketball team to lose its next game during the March Madness tournament.

Liberty University, down by 10 points with less than seven minutes to play against fifth-seeded Mississippi State, hung in a beat the higher seeded team. This was too much for

Laura Wagner writing for Deadspin. She’s prayed that Liberty would lose in their second-round game against Virginia Tech.

Wagner writes, “Jerry Falwell Jr.’s infamously strict and alarmingly retrograde university won its first game ever in the NCAA tournament ever and I, for one, am praying to the Lord God in heaven that it never happens again.” 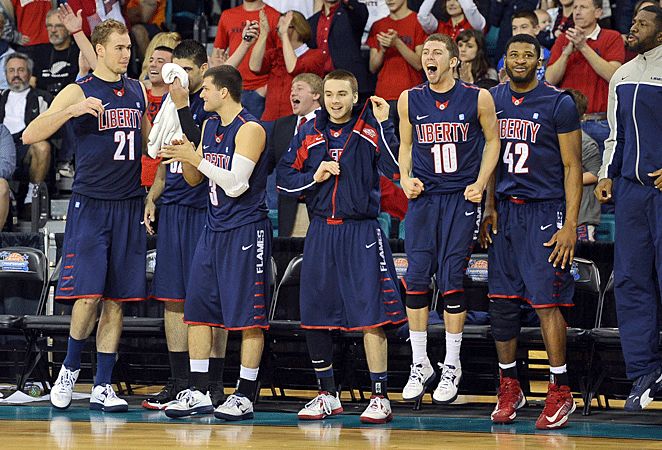 Wagner says she’s not against the players, “but if Liberty—the ultra-right-wing Christian university that has staunchly supported Donald Trump (drawing ire from some of its own students), and whose legally questionable anti-gay, anti-transgender policies prohibit ‘sexual relations outside of a biblically ordained marriage between a natural-born man and a natural-born woman’—becomes the tournament’s much-hyped Cinderella team, I’m going to have to learn some satanic rituals.”

She goes on in her fate-filled screed, “Liberty University is a den of bigotry masquerading as Christianity, and I’m dreading the scenario in which they go on an inspiring NCAA tournament run, thereby bringing them heaps of breathless coverage on a national scale. Dear God, I pray that Liberty loses to Virginia Tech on Sunday night.”

“Deadspin launched its first attack on Liberty during a podcast three days ago. Drew Magary and David Roth and guest Gabe Fernandez selected Liberty as the school they hate the most in the 64-team field. They agreed that the ‘evangelical base of Trump’s election, Liberty University’ makes it the ‘most repelling program in this tournament.'” (Newsbusters)

I bet you she and the folks at Deadspin are all in when Virginia voted to legalize killing unborn and born babies. That in itself is akin to some satanic ritual.

While Liberty is playing some good basketball, the above picture shows what Democrats are voting to do.

It won’t be too long before the NCAA bans schools like Liberty from tournament play in the future because of the school’s stance on LGBTQ+ insanity.

Then there’s San Antonio and Chick-fil-A:

Chick-fil-A has been banned from opening up a new location at the San Antonio International Airport.

On Thursday, the San Antonio City Council approved a seven-year concessions agreement for new restaurants and businesses in Terminal A of the Texas airport with Paradies Lagardère, a travel retailer and restaurateur that works with more than 100 airports.

Chick-fil-A was initially in the plans, but council members amended the plans to exclude the chicken restaurant, with some citing concerns with its record on LGBTQ issues. The amendment was approved by a 6-4 vote.

Councilman Roberto Treviño said in a statement after the vote that, with the decision, the council “reaffirmed the work our city has done to become a champion of equality and inclusion.” (USA Today)

San Antonio has “become a champion of equality and inclusion,” except when it comes to Chick-fil-A that sells chicken sandwiches, biscuits, and waffle fries and has never discriminated against anyone!

New York City tried to keep out Chick-fil-A, and now New York City is home to the largest Chick-fil-A in the world. The five-story restaurant comes complete with a rooftop terrace. The chicken restaurant chain employs more than 140,000 people in 2,300 restaurants across 47 states, including New York.

Robert Gagnon, who has been a watchman on the wall regarding same-sex sexuality, has posted the following about Jannique Stewart on his FB page:

This brave woman was disinvited (twice) from Cornell, not because she was speaking against abortion (she was in fact invited to address this) but because of a belief she held, about which she was not speaking: namely, she believes (with Jesus) in a male-female foundation for marriage. She was told that this was tantamount to being pro-slavery (she’s African American) or pro-Holocaust.

This conforms to what I have been saying for decades: That the greatest threat to freedom of speech and free exercise of religion comes not from abortion fanatics (as great as that threat is) but from homosexualist and transgenderist fanatics. Yet I still read about Evangelicals and conservatives speaking and acting as if “LGBTQI” coercion was not a matter of great political concern or even a concern at all.

You might be hated for your pro-life views; but that pales in comparison to the vitriol you will face for your view on sexuality according to nature. You are barred from speaking about anything else, no matter how controversial, if you hold to a view about sexuality that until a short while ago was the consensus view by moralists worldwide and for millennia. Voting Democrat is begging for this prejudice to be codified into law in every way imaginable.

If you have any reservations about voting in 2020 because the Republicans don’t have a perfect candidate to offer, think again.