Far-left U.S. Rep. Alexandria Ocasio-Cortez (D-NY) spoke to a group of adoring fans at the South by Southwest conference who know as much about economics as she does. The question of automation came up:

“We should not feel nervous about the tollbooth collector not having to collect tolls. We should be excited by that. But the reason we’re not excited about it is because we live in a society where if you don’t have a job, you are left to die,” she said.

We should be excited about automation, because what it could potentially mean is more time educating ourselves, more time creating art, more time investing in and investigating the sciences, more time focused on invention, more time going to space, more time enjoying the world that we live in,” she said. “Because not all creativity needs to be bonded by wage.”

At the same conference, she said, “To me that ideology [capitalism] is not sustainable and cannot be redeemed.”

How will that automated toll both operator get built? Who will risk the capital and time to do it? Capitalist countries build these types of things. The is true of the washing machine, clothes dryer, refrigerator, microwave, vacuum cleaner, air conditioner, and every other modern home convenience, everything that Alexandria Ocasio-Cortez and her followers use every day and would fall apart if they didn’t have them.

What economic system freed women from drudgery in the home? Capitalism!

Socialism needs capitalism to exist. If there weren’t capitalists, socialism would be impossible. There’s nothing to steal if capital is destroyed.

It’s the same thing with recycling. If there weren’t items to recycle there wouldn’t be recycling. I’ve seen videos of small third-world communities make roads out of discarded plastic.

Goodwill stores operate for the benefit of people because other people with lots of stuff decide to give it away. Income inequality helps everyone. People with lots of money invest it, loan it, and spend it. It trickles down through the economy.

Apple employs nearly 50,000 people. Amazon employs more than 500,000 people. They do this with their own money. That money was acquired by the operating premise of capitalism: “Let’s make a deal.” Apple has what someone wants, and people who want it give money in exchange for what they want.

Their working and spending help other people who are not directly employed by these big companies. This economic dynamic applies to every business. In addition, people own stock in companies and get dividends. No one is forced to do any of these things.

Socialism would tell you what you can buy, what something should sell for, and how much of a profit you can make.

Capitalism has made it possible to travel around the world in hours instead of months or years. There’s no need to go down to the river or out to the well every day for water. Or chop down trees to heat our homes.

We can talk to people anywhere in the world where there’s a cell phone tower. We’re no longer tethered to a wire plugged into a wall. Now you know who’s calling.

When the first cell phones came out, they were massively expensive. The same is true of computers. The software that’s on smartphones would have cost a million or more dollars 30 years ago. Some of the technology didn’t exist 30 years ago.

Who purchased those first expensive phones and computers? People with extra money to spend. Their spending made it possible for companies to manufacture and sell these products at a lower price. We now have phones and computers that far exceed what people used 20 years ago at much less cost.

I can write a book on my computer, typeset it, package it, send it to a printer, and have printed and bound copies shipped to me in around two weeks.

It’s expensive to ship books to foreign countries. No problem. I can upload an eBook or a PDF. The book is delivered within a few seconds with no shipping costs.

I can produce a film in my office using my phone and upload it to my Youtube channel where anyone can watch it unless Socialists like Alexandria Ocasio-Cortez and her socialist supporters decide I’m a threat to their ideas. A number of award-winning films have been shot with an iPhone.

If you wanted to listen to music, you needed one of these: 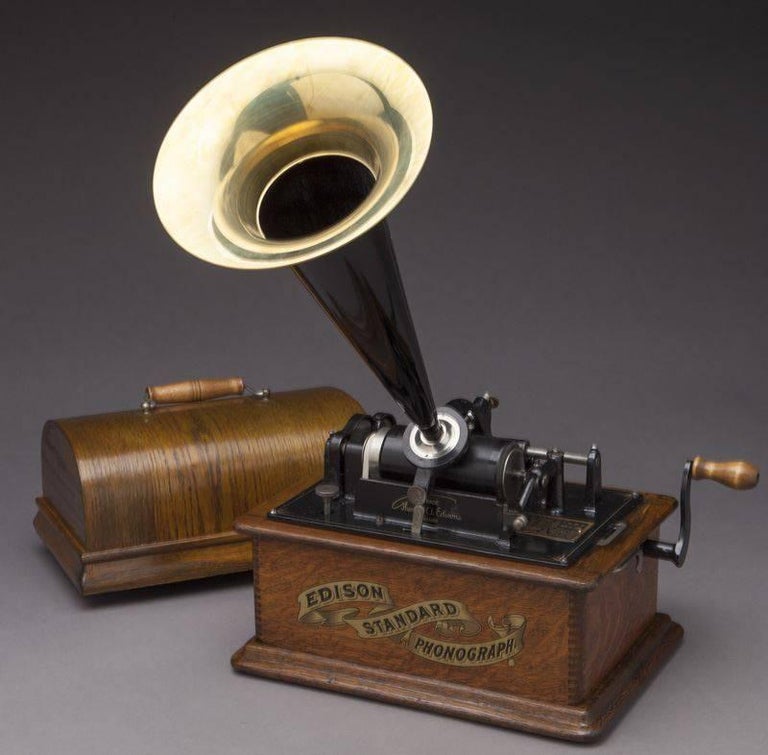 The cylinder playing held one song!

But who needs an iPod? Music can be played on your phone, Alexa, TV, car radio.

The people who are cheering the economic nonsense of Rep. Alexandria Ocasio-Cortez would be the first people to starve to death and seek a safe space in a socialist society. The thing of it is, there are no safe spaces. Standing in line for food would take up most of their day.

Consider the following from Nola Dalla about his experiences when the Romanian Revolution swept through his country:

“Revolutions aren’t about guns and political dogma. They are about bread and milk…. Lines were everywhere.  Lines formed for just about everything. There were lines for bread. Lines for milk. Lines for eggs.  Lines for meat.  Lines for gasoline.  On occasion, a shopkeeper would suddenly appear in front of the store, post an announcement, and a line would immediately begin forming. Some people jumped in line having no idea what they were buying at that moment.  They simply lined up because something new was about to be delivered and this was an opportunity to get it fresh.”

The Goal is to Redefine the Family