The Left is always talking about how wealthy people are immoral. Those on the Left who are rich define rich as someone who is richer than they are. They are exhibiting the sin of envy. Envy is not jealousy or covetousness. Envy is the politics of destruction. If I can’t have what you have then neither can you have it. To make sure you can’t have it, the envious person will destroy it.

The most severe and heartbreaking act of envy is when a father or mother decides to kill their children so the other parent can’t assume custody.

The Bible has a lot to say about envy. Here’s one example:

Now Isaac sowed in that land and reaped in the same year a hundredfold. And the Lord blessed him, and the man became rich, and continued to grow richer until he became very wealthy; for he had possessions of flocks and herds and a great household, so that the Philistines envied him. Now all the wells which his father’s servants had dug in the days of Abraham his father, the Philistines stopped up by filling them with earth (Gen. 26:12-15). 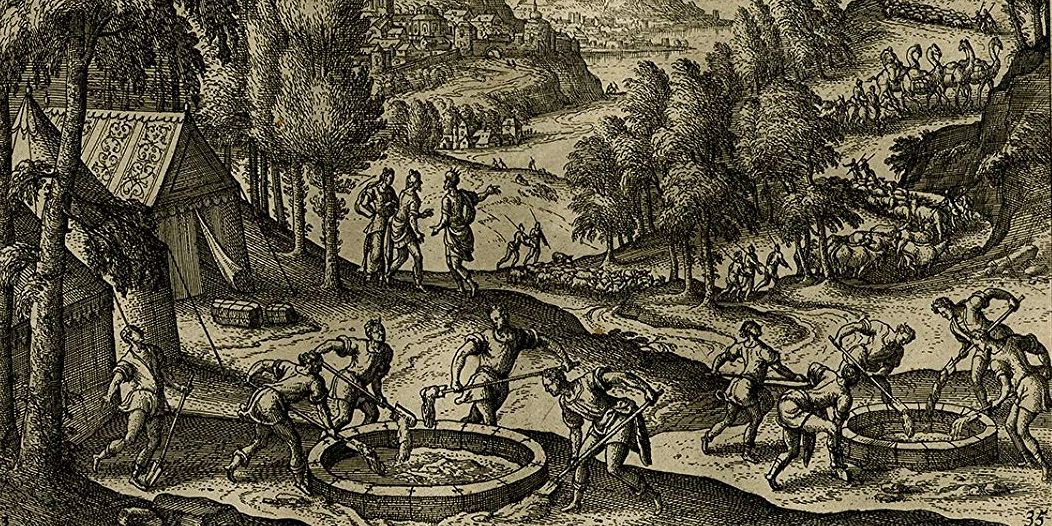 Instead of learning why Isaac was wealthy, the Philistines decided to sabotage one of his assets. Who got hurt in the process? The Philistines and anyone else who used Isaac’s well! There would most likely be a domino effect of a loss of production for people who purchased Isaac’s “flocks and herds.”

It didn’t matter because the Philistines got that rich bastard Isaac and all his flocks.

Today’s Leftists are like the Philistines. They envy those who are more prosperous than they are forgetting that it’s rich people who create jobs. Governments don’t create jobs unless you consider stealing money from some people and giving it to other people as creating jobs.

The GOP needs to start talking about wealth confiscation as theft.

Dr. Gary North’s essay is a helpful antidote to the call for wealth confiscation in the name of Social Justice.

One law shall be to him that is homeborn, and unto the stranger that sojourneth among you (Exodus 12:49).

This legal underpinning of liberty rests on a principle of morality. That principle is this one: the defense of private property. The Bible is clear about this: “Thou shalt not steal (Exodus 20:15). It is one of the Ten Commandments. In what ways is related it to the wealth tax? In this way: when a majority of individuals who are not wealthy banded together to vote into law taxes that apply only to the wealthy, they are thieves. They are using the power of state violence to extract money from members of one income tax bracket in order to transfer that money to members of lower income tax brackets (minus 30% for handling). It is summarized in this brief poem:

Don’t tax you.
Don’t tax me.
Tax the guy behind the tree.

Fortunately for liberty in the United States, it has proven impossible for the United States government to generate extra tax revenues by taxing the rich at extortionate rates. The rate during World War II was 91%. That rate was maintained until the Johnson administration when it was dropped to 70%. This 1964 law became known as the Kennedy tax cuts. Here is a chart that demonstrates that such levels of taxation did not increase the ratio of tax revenues to GDP.

The sharp increase of revenues that took place in 1944 was not the result of the imposition of the 91% bracket. It was the result of the federal government’s adoption of income tax withholding. That was Milton Friedman’s recommendation. He was a young economist working for the Treasury in 1943. Free market economist Robert Higgs has written about Friedman’s support of the 1943 Tax act here. 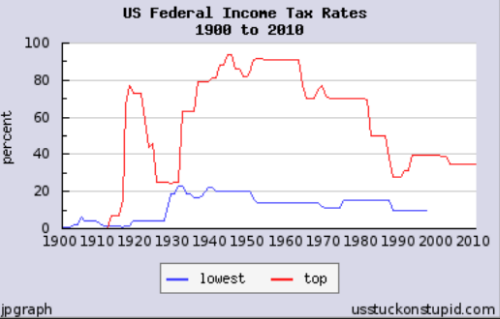 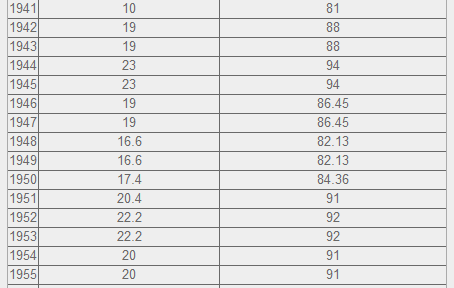 The chart and the table are posted here.

Let’s go back to the original chart on the ratio between actual tax revenues and GDP. You will notice that there was no decrease in total tax revenues as a result of Johnson’s decrease from 91% to 70% in 1964. There was also no decline in revenues as a result of Ronald Reagan’s decrease from 70% to 28%. This makes it clear that the federal government is going to collect approximately the same revenue from the general public, whether or not income tax rates imposed on the rich are high or low.

The rich do not pay much income tax. That is because they take their income in the form of capital gains. Capital gains are taxed at a much lower rate. There are also other loopholes available to them.