When This One Thing is Gone, It’s All Over

London buses were outfitted with the following banner ads: “There’s Probably No God. Now Stop Worrying and Enjoy Life.”1 The sponsors hoped the postings would get people to question the existence of God: “This campaign to put alternative slogans on London buses will make people think — and thinking is anathema to religion,” the promoters argue. “[Richard] Dawkins said that as an atheist he ‘wasn’t wild’ about the ad’s assertion that there was ‘probably’ no God.”2 He wanted the ads to say “There is no God.” 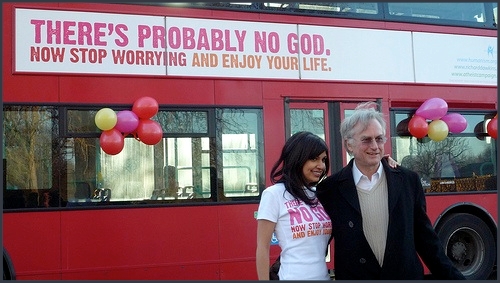 Two girls who took part in riots in Croydon, a town in South London, England, have boasted that they were showing police and “the rich people that we can do what we want.” They said it calmly and matter-of-factly. Has Richard Dawkins contributed to a change in moral philosophy among London’s youth with his atheist bus campaign?

People were robbed. Businesses burned. Reports on Twitter claimed some people were being stripped, while another shocking video shows a bleeding teenager being robbed in broad daylight by lawless thugs who pretend to help him to his feet. Here’s how one newspaper headline described what was going on: “‘Mob Rule’ as London Rioting Spreads.” It seems to me that it’s nothing more than evolution’s “survival of the fittest” in action, especially since “nobody is watching.”

There’s no God, Dawkins and his fellow atheists have been telling the world, so stop worrying and enjoy life. The rioters are enjoying life at the expense of others, and who are you or anyone else to say that they shouldn’t be enjoying life the way they want to enjoy life?

Rapists are enjoying life. So are murderers — even mass murderers — until they’re shot dead. Is there a difference between the murdered and the murderer if there is no God?

Dawkins and his atheist comrades are blind leaders of the blind (Luke 6:39):

Pieter Bruegel the Elder: “The Parable of the Blind Leading the Blind.”

The following article is written by Jerry Newcombe. He can be reached at

Everyone is scratching their heads trying to figure out what has gone wrong when disturbing stories break of more attacks by young men killing strangers at random. We are reeling as a nation in the wake of the most recent mass shootings and wondering what has caused this tragic phenomenon.

Our cultural elites have led us down a path of unbelief, and now we are reaping the consequences.

I’m reminded of the story about Voltaire, the famous French skeptic, who helped grease the skids for the bloody French Revolution. When one of his skeptical guests was talking loudly at his home, Voltaire asked him to lower his voice. He didn’t want the servants to hear their godless philosophy, lest they steal the silverware.

It’s the morality, stupid. Of course, this phrase piggybacks on the unofficial campaign slogan of Bill Clinton in 1992: “It’s the economy, stupid!” This simple phrase kept Clinton’s campaign focused, eventually on to victory.

In today’s crisis – which is not something brand new, it’s been brewing for decades in America – it’s the morality, stupid And what’s the cause of this morality? We have driven God out of the public arena.

Unbelief assumes there is no divine accountability. When there is no fear of God in the land, then people do whatever they feel like doing – even if it inflicts mayhem on others. As an atheist character in Dostoyevsky’s “Brothers Karamazov” put it: “… since there is no infinite God, there’s no such thing as virtue either and there’s no need for it at all.”

America is ultimately an experiment in self-government. After the Founding Fathers hammered out the Constitution in 1787 in Philadelphia, a Mrs. Powell of that city asked Benjamin Franklin what kind of government they gave us. His answer was classic: “A republic, Madam, if you can keep it.”

The founders knew that the only way we could sustain this self-government was by the people being virtuous, acting in a moral way. And how would that morality be sustained? Answer: through voluntary religion.

The man who spoke more than any other at the Constitutional Convention was Gouverneur Morris of Pennsylvania. He is credited with writing some of the Constitution, including the preamble (“We the People”). He noted that religion is necessary for morality: “Religion is the only solid basis of good morals; therefore education should teach the precepts of religion, and the duties of man toward God.”

George Washington said in his Farewell Address that it is religion that sustains morality. If you undermine religion, you’ll undermine morality.

That is precisely what has happened to America. Beginning with a whole series of misguided Supreme Court decisions, religious influence – frankly, Christian influence – in society was restricted more and more. By the 1960s, God was effectively kicked out of the public schools.

When he was 14 years old, William J. Murray was the plaintiff in one of the key anti-school prayer cases on behalf of his atheist mother, Madalyn Murray O’Hair. Today, Murray is a born-again Christian, ruing the terrible decision and its consequences.

He once told me, “I would like people to take a look at the Baltimore public schools today versus what they were when I went to those schools in 1963 and my mother took prayer out of the schools. We didn’t have armed guards in the hallways then when we had God in the classroom. But I’ll guarantee you there are armed guards [now]. In fact, the city school system of Baltimore now has its own armed police force.”

We lack a fear of God in our land. Young people have no idea that after they die, they will have to give an account to Jesus, whom the founders called in the Declaration of Independence, “the Supreme Judge of the World.”

In the mid-19th century, one of the speakers of the House of Representatives was Robert Charles Winthrop, a descendant of John (“a City on a Hill”) Winthrop, the Puritan founder of Boston.

Robert Winthrop gave an address in 1849 at the Massachusetts Bible Society, in which he noted, in effect, our choice is clear: Will it be Christianity or violence?

Would that we choose the Bible today, as the settlers and the founders of our nation chose to do.

The Bible is the Best Interpreter of the Bible

When This One Thing is Gone, It’s All Over