When I was 13 or 14 years old, I would take the bus and streetcar to downtown Pittsburgh in the early 1960s. I would look for the man selling large salted German pretzels and browse the used bookstores looking for paperback science fiction novels. I still have two of them in my collection, Wilson Tucker’s Man From Tomorrow, originally titled Wild Talent and Charles Eric Maine’s He Owned the World (1960).

Tucker (1914-2006), who had been writing science fiction since the 1930s, made this interesting observation: “To my knowledge, not a single writer of the early era foresaw email or the introduction of the internet concept. We were busy with variations of the telephone–radio phones, picture phones and the like. Yes, we missed the boat.” 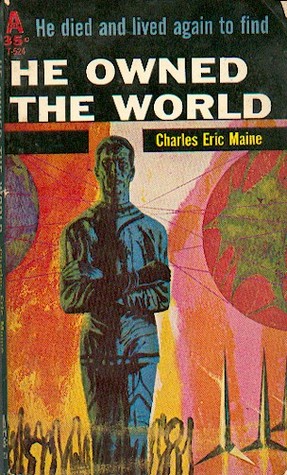 Maine’s He Owned the World is about Astronaut Robert Carson who died in an attempt to be the first man to orbit the moon. A malfunction sent him off target where he died in the coldness of space. Future space exploration 8000 years later by immortals on Mars found his disabled craft and brought him back to life. It turned out that he was the heir to a trust that essentially made him the owner of Earth.

It has quite a surprise ending.

The story reminded me of the debate over American citizenship, illegal immigration, and Jesus. Jesus is the owner of the world

“Happy Easter! Never forget…Jesus was an ‘illegal immigrant,’ Ruffalo tweeted to his nearly 5 million Twitter followers with a link from the Guardian about Jesus entitled, “The politics of Easter is powerful. Let’s not forget it.”

The politics of the resurrection is that Jesus is our Redeemer, not the State! Jesus died and rose from the dead to redeem people from “from every tribe and language and people and nation” (Rev. 5:9). The Great Commission is international:

And Jesus came up and spoke to them, saying, “All authority has been given to Me in heaven and on earth. “Go therefore and make disciples of all the nations, baptizing them in the name of the Father and the Son and the Holy Spirit, teaching them to observe all that I commanded you; and lo, I am with you always, even to the end of the age” (Matt. 28:18-20).

There was a time when the United States self-identified as a Christian nation. Most of its laws were biblically based. Even if someone was not a Christian, that person was bound by the laws of the land. This is no longer the case.

Notice that Israel had one law that was for the native-born and the stranger: “The same law shall apply to the native as to the stranger who sojourns among you” (Ex. 12:49) and “There shall be one standard for you; it shall be for the stranger as well as the native, for I am the LORD your God'” (Lev. 24:22).

The “same law” today is secularism mixed with remnants of biblical laws rapidly being replaced.

Then there are the gangs and possible radical Islamists who may be entering our country.

Trying to make Jesus something He isn’t is standard fare among the Hollywood elitists.

A Jewish rabbi is calling out a Muslim lawmaker — who has been accused of anti-Semitism — and the New York Times for pushing the notion that Jesus was a Palestinian…. Rabbi Abraham Cooper, associate and director of Global Social Action Agenda at the Simon Wiesenthal Center, called out Rep. Ilhan Omar, D-Minn. after she retweeted a tweet from Omar Suleiman, an adjunct professor of Islamic Studies at Southern Methodist University,” claimed Jesus was a Palestinian. “The day before the tweet, a New York Times op-ed claimed: “Jesus, born in Bethlehem, was most likely a Palestinian man with dark skin.”

He was born a Jew most likely with dark skin. What His skin color has to do with anything is a mystery to me.

Jesus said the following to His disciples:

“Do not go in the way of the Gentiles, and do not enter any city of the Samaritans; but rather go to the lost sheep of the house of Israel (Matt. 10:5-6).

Ignorance is rampant among Hollywood elites and the intelligentsia. Jesus was a Jew. More than that, Jesus was and is the owner of all things. He is the sovereign Lord and King of kings who has all authority in heaven and earth.

Jesus is the Creator of all things. He has rights as its creator and owner:

Is the American Church Dying or Are Christians Just Hiding?