Tony the Tiger Gets His Gay Stripes

Latest studies show that homosexuals make up about 1.5 percent of the population. It’s shocking how they control the media, the film industry, the courts, and big-name companies. My theory has always been that it’s not that these companies support same-sex sexuality; it’s that by defining deviancy down, they can justify their own sexual appetites.

I have not been able to figure out why some of the more traditional companies have gone all-rainbow on US. Does Kellogg’s and one of its signature cereal brands Frosted Flakes really need to be pushing same-sex sexuality? Who’s running this company and what’s its target audience?

WEAR YOUR STRIPES WITH PRIDE

“At Kellogg, we’re an evolving culture that respects and accepts employees’ sexual orientation, gender identity and gender expression so that all employees can be authentic and fully engaged.” 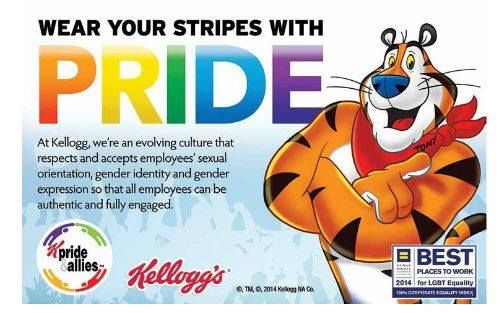 I’ve never understood the thing about “pride.” Who takes pride in a particular sexual practice that has a high incidence of disease? The following is from the CDC:

“Sexually Transmitted Diseases (STDs) have been increasing among gay and bisexual men, with recent increases in syphilis being documented across the country. In 2012, men who have sex with men (MSM) accounted for 75% of primary and secondary syphilis cases in the United States. MSM often are diagnosed with other STDs, including chlamydia and gonorrhea infections.”

Is normalizing homosexual “pride” the thing that parents what their children supporting and learning about? Have parents actually seen a ‘Gay Pride Parade’? The images are so disgusting that they would make Tony the Tiger to run to tall grass:

“Kellogg’s was a sponsor of the Atlanta Gay Pride March and festival . . . Apparently, Tony the Tiger wants to make sure you and your kids ‘wear your stripes with pride,’ gay pride that is.

“According to the American Family Association’s (AFA) Facebook page, ‘[t]hey even put an ad in the ‘Pride Guide.’”

“‘At Kellogg, we’re an evolving culture that respects and accepts employees’ sexual orientation, gender identity and gender expression so that all employees can be authentic and fully engaged.’

“Also displayed on the ad is Human Rights Campaign (HRC), who considers Kellogg one of the ‘BEST PLACES TO WORK,’ due to its support ‘for LGBT Equality.’”

“An HRC Blog titled ‘Did Your Favorite Brands Make the Naughty or Nice List This Year?’ says Kellogg’s made the nice list. ‘Kellogg’s, which owns the delightful treats from Keebler, Famous Amos and Rice Krispies, on the other hand, is getting everything on its Christmas List this year. It scored a 100 percent on the CEI (Corporate Equality Index),’ the blog reads.

“But wait, there’s more. According to HRC’s Buyers Guide, Kellogg’s acquired a rating of 100, a perfect score, due to Kellogg’s efforts to support the LGBT community.”

“Worst of all, though, the ‘PRIDE’ ad didn’t even get the pun right. Tigers don’t belong in ‘prides,’ let alone pride parades.”

Actually, confusing lions and tigers is what we should expect since Kellogg’s with its support of the LGBT community is full of gender confusion issues.

Tony the Tiger Gets His Gay Stripes