Today’s Judges Are Dangerous for One Specific Reason

Some time ago I was watching the film The Magnificent Yankee (1950), a film about Supreme Court Justice Oliver Wendell Holmes. Early in the film, Holmes is introduced to the first of his law-school graduate secretaries played by Jimmy Lydon, best known for his role as Henry Aldrich in the film series of the same name.

To butter up Mr. Holmes, he starts spouting off some of the Justice’s legal views, one of which was how the law must change with the times.

The question always is, on what basis is something a law that needs to be obeyed?

We cannot live within the fluid boundaries of legal relativism. There must be a definitive and final legal standard of appeal to justify moral decisions at the personal and governmental levels. If not, then one judge’s opinion is as good (or as bad) as another. And that’s the way it’s become. While the Constitution states that it is “the law of the land,” there is very little law in it. It doesn’t say anything about murder, theft, or rape. It assumes an existing body of fixed law that many have described as Natural Law or the Law of Nature, as the Declaration of Independence puts it. Holmes rejected Natural Law. He believed “that men make their own laws; that these laws do not flow from some mysterious omnipresence in the sky, and that judges are not independent mouthpieces of the infinite… claiming that morality is human in its origin.”1 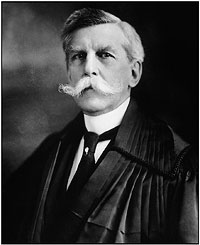 What is the origin or morality in a species that evolved from unaccounted for matter-only cosmos? How can the process of evolution bring about morality and justify it? It’s no wonder that the biography of Holmes and his family is titled The Yankee From Olympus. The judges determine what’s moral. “Let it be written; let it be done.”

The Law of Nature was always enlightened by revealed law as William Blackstone made clear. We’ve done away with such a notion. God has been kicked out of His own creation. Mere created entities have assumed the role of gods.

The following is a sample of what some of our nation’s prominent leaders thought of the moral foundation of law in the United States:

“The law given from Sinai was a civil and municipal as well as a moral and religious code; it contained many statutes adapted to that time only, and to the particular circumstances of the nation to whom it was given; they could of course be binding upon them, and only upon them, until abrogated by the same authority which enacted them, as they afterward were by the Christian dispensation: but many others were of universal application — laws essential to the existence of men in society, and most of which have been enacted by every nation, which professed any code of laws.”

He added, “Vain indeed would be the search among the writings of [secular history] . . . to find so broad, so complete and so solid a basis of morality as this Decalogue lays down.”2

John Witherspoon (1723–1794), the president of what later came to be known as Princeton and a signer of the Declaration of Independence, wrote that “moral law published upon Mount Sinai [is] the publication or summary of that immutable law of righteousness, which is the duty of creatures, and must accompany the administration of every covenant which God makes with man.”3

John Jay (1745–1829), one of the authors of The Federalist Papers who also served as the first Chief Justice of the United States Supreme Court, wrote the following in a letter dated April 15, 1818 to his friend John Murray:

“[T]he law was given by Moses, not however in his individual or private capacity, but as the agent or instrument, and by the authority of the Almighty. The law demanded exact obedience, and proclaimed: ‘Cursed is every one that continueth not in all things which are written in the book of the law to do them.’”4 In that same letter, he wrote:

“The inspired prophets, on the contrary, express the most exalted ideas of the law. They declare that the law of the Lord is perfect, that the statutes of the Lord are right; and that the commandment of the Lord is pure; that God would magnify the law and make it honorable, etc.

“Our Savior himself assures us that he came not to destroy the law and the prophets, but to fulfill; that whoever shall do and teach the commandments, shall be called great in the kingdom of heaven; that it is easier for heaven and earth to pass, than one tittle of the law to fail [Matt. 5:17–18]. This certainly amounts to a full approbation of it. Even after the resurrection of our Lord, and after the descent of the Holy Spirit, and after the miraculous conversion of Paul, and after the direct revelation of the Christian dispensation to him, he pronounced this memorable encomium on the law, viz.: ‘The law is holy, and the commandments holy, just, and good’ [Rom. 7:12; also see 1 Tim. 1:8].’”

Nightline host Ted Koppel stated in a 1987 commencement address at Duke University, “What Moses brought down from Mt. Sinai were not the Ten Suggestions. They are commandments. Are, not were. The sheer brilliance of the Ten Commandments is that they codify in a handful of words acceptable human behavior, not just for then or now, but for all time. Language evolves. Power shifts from one nation to another. Messages are transmitted with the speed of light. Man erases one frontier after another. And yet we and our behavior and the commandments governing that behavior remain the same.”5

Atheist fabricates Bible verse about women, paints it on his truck, and then claims it's Christians who make stuff up

Today’s Judges Are Dangerous for One Specific Reason